I have been astounded by the story of the RMIT Business campus and the brain-tumour-causing mobile phone towers. The most shocking thing has been the stampede by 'experts' to deny linkage b/w towers and cancers. Throw away your mobile phones immediately! They are addictive and deadly! 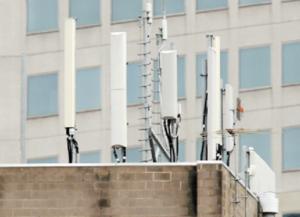 AUSTRALIA: This whole thing with at least 7 people getting brain tumours (since 1999) on the top 2 floors of the RMIT Business campus in Bourke st is pretty revelatory. Five people with brain tumours were on the top floor directly under a multitude of Telstra/Optus Mobile phone towers.

It has been said that there are maybe even more people affected. The top 2 floors have been vacated (even though 2 cases were found on the 11th and 14th floors of the 17th floor building.)

Apparently, one in every 10,000 people develop a brain tumour a year. What are the chances of 7 people getting them in 7 years in the same building. I'll bet the odds are pretty remote!

Apparently, there 169 of these mobile phone tower- radiation-spewing killers just in the CBD. There are 32 in hospital grounds and 6 in schools. I remember seeing one on a church once!

The most disgusting thing has been the slew of 'experts' scrabbling to absolve these holy spires of communication from any blame in this case.

Radiation 'experts' are questioning the individual case histories of the people, potential chemical contamination, x-rays-anything but the towers. It's all just some horrible coincidence according to esteemed epidemiologists (whatever they are!).

The various Cancer Institutes and Councils are also desparately attempting to deflect attention from their corporate friends. The resident Professor Elwood from Cancer Council Victoria says it is all a "coincidence".

Has anybody-else noticed that these Cancer Clubs always focus on smoking and the sun as the main culprit for cancer cases. They never talk about environmental causes-such as pesticides, fungicides, herbicides, plastics, petrol, food chemicals and every other carginenic chemical sprayed and manufactured by big business. Not to mention overhead powerlines, power substations, mobile towers etc...

These Cancer Councils are corrupt. Their solution to the growing epidemic of cancer in our society is to funnel more millions into the 'cancer cure industry' which focuses solely on vivisecting millions of poor, defenceless animals.

Meanwhile, we are bombarded by advertising from these Cancer Councils imploring us for funds as they employ tacky 'Pink Lady Breast Cancer' campaigns which solely focus on the symptom and not the cause which is shrouded in mystery and left to the vivisecting 'experts'. Tragic cancer case studies are exploited by these organisations to milk more money for the Pharmaceutical Corporations.

Every few months the corporate media tantalises us with a 'cancer cure' which like a dangling carrot is always just around the corner.

Phew! Back to the RMIT case:

Professor Abramson from the Australian Centre for Radiofrequency Bioeffects Research (as reported in The Australian) says that because 2 of the RMIT victims' tumours were malignant and the others' were benign this shows that it was "less likely there was a common cause". Say what! Would he have been convinced if they'd all been terminal!

Here is how The Age reported the current studies into the danger of mobile phone radiation:

"International studies seeking to determine whether there is any link between mobile phone use and brain cancer have produced conflicting results. Swedish researchers believe there is an association, but most of the research says there is not. [At least the Swedes are honest!]

A meeting organised by the World Health Organisation concluded there was a need to investigate the issue, and set up a trial involving 13 countries, including Australia. Bruce Armstrong, director of research at the Sydney Cancer Centre at Sydney University and the Royal Prince Alfred Hospital, is leading the Australian part of the trial. The international and Australian parts of the trial have received some funding from mobile phone manufacturers

Bruce Armstrong, director of research at the Sydney Cancer Centre at Sydney University and the Royal Prince Alfred Hospital, is leading the Australian part of the trial. The international and Australian parts of the trial have received some funding from mobile phone manufacturers.

Mr Armstrong said the Australian results had not yet been released, but results from Britain and some Scandinavian countries did not find an association between brain tumours and mobile phone use. He said the funding from the mobile phone industry had no influence on the way in which the study was done or the findings."

This guy Armstrong has some chutzpah! He denies the Swedish studies which have shown danger and denies the Telstra/Optus cash going into his pocket is not influencing his research. Bullshit! It is common knowlege that the sponsors of studies which come up with adverse results (for them) often bury them toute-suite!

This RMIT tragedy is the tip of the iceberg. Millions of Australians walk around with mobile phones glued to their heads. I never liked the things anyway. Just like microwave ovens, I always thought they were dodgy.

These mobile phone menaces need to be torn down pronto! Maybe they could start with the ones in the schoolyards?

Mobile phones and towers are just the latest scandal in a long line of modern corporate health scandals in this toxic Capitalist society.

How long will we put up with Corporations poisoning and killing us with their fantastic products?

I know it may be hard but people should at least consider chucking their mobile phones. They're expensive, obnoxious and now it's becoming increasingly obvious that they are deadly.