This morning nonviolent direct action group Block the Builders took their protest against the controversial Orion laser facility to the doors of the cement factory supplying materials for foundations of new facilities at AWE Aldermaston. 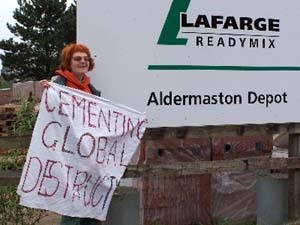 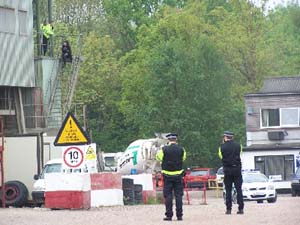 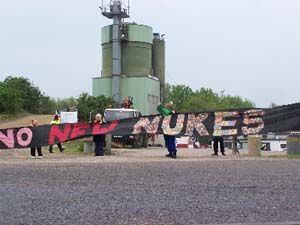 The Aldermaston depot of international cement company LaFarge was blockaded for one hour, during which time there was one arrest. One woman also locked on to the depot's concrete supply. Despite a cutting team on-site, the police made no moves to remove her. After almost two hours, she came down voluntarily and was not detained.

At AWE Aldermaston itself, a group of protesters maintained a hi visibility presence from around 8am.


A spokesperson for Block the Builders said "We are calling on companies with contracts to build or project manage new facilities at AWE to cease and desist their complicity in Britain's illegal and immoral WMD project."

Police are running a large operation at AWE on a monthly basis, combining three forces, in the face of increasing public opposition to what AWE themselves have said will become the biggest construction site in the UK, rivalling Heathrow's Terminal 5.

This morning's actions are part of an ongoing campaign of nonviolent resistance to new facilities being developed at the Aldermaston site which campaigners believe will facilitate the next generation of nuclear weapons.

ENDS
1. 1. Lafarge is massive global company (75 countries) with sales of over 14 million euro in 2004. Its headquarters is in France. Lafarge Cement UK bought up Blue Circle in 2001. The Orion project will involve larger amounts of concrete. There were two possibilities being considered at the outline planning stage; either producing concrete on site, or a 24 hour concrete delivery for up to two weeks. Lafarge's Aldermaston depot is opposite AWE Aldermaston and their vehicles have been observed on a regular basis delivering large quantities of readymixed cement or concrete to AWE.