North America: Big Brother said it: "It's the Moment of Truth!"

Precisely this emancipatory lesson should be taught to Bush and his military industrial complex. There are more economic, political and social "arms of mass resistance" in store, stockpiled across the globe, that could be applied to topple the "Empire." In fact, there are measures that could scare the hell out of the bosses of the whole world market. For example, what about the catastrophic effects of a global workers' strike, a stay-at-home for just a month? How much "collateral damage" would this labor atomic bomb cause? It could put NASA, the Pentagon and NATO in total jeopardy, it even could wipe out mankind! 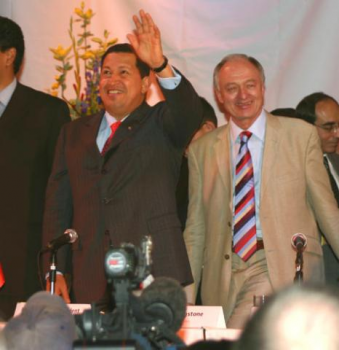 The book of history, of the labor process, of the process of production explains to us what happened, what occurs now, and it can even project our future.

In the last century, full many a revolutionary flower was born unseen, and it wasted its sweetness on the desert air.

Josip Broz Tito was victorious against both Hitler and Stalin, yet today Yugoslavia is no more, was atomized. The Comintern ... Lenin, Trotsky and Stalin ... triumphed in the October Revolution, seven decades later the Soviet Union evaporated into nothingness. Iraq is being raped, violated, murdered. The German Mark, Hoechst, the Queen Mother, Lady Di, Mother Calcutta ... all are gone with the wind, blown "East of Eden"!

Definitely, in the Far East and the Mideast, the imperialist moment of truth has also arrived. In a new rocket race on the Asian mainland, hundred millions of pauperized wage slaves and unemployed workers are in immediate danger of nuclear extinction.. On May 12, 2006, the Washington UPI news analyst, Martin Sieff has informed us that currently "the South Asia ballistic missile and nuclear arms race between India and Pakistan rivals the one between Israel and Iran for being the most dangerous on the planet."

True Americans, what happened to your USA, to your democratic elections of, by and for the people? Is your dollar still trustworthy, still worth a farthing? , Did all your daydreams of youth crash with the "Twin Towers," with the "Florida Vote," with the hoaxes of Bush and consorts? Are you facing the biggest crash of all times? Michael C. Ruppert, from the wilderness, already informed you what urgent preparations you must take immediately.

* It seems that the moment of truth is arriving on all parts of our planet. White Apartheid South Africa is gone, yet global fascism is here to stay, soon it will devour Southern Africa again.

Hamba kahle! Comrade Mazwi Douglas Zulu (46), affectionately known as Komi, of E515 Umlazi Township, who was barbarically gunned down by two assassins in a neoliberal inferno.

A while ago, on April 26, 2006, Durban has celebrated its first "Unfreedom Day." Beware Nelson Mandela and Thabo Mbeki, the historic moment of truth of the ANC, that defends capitalism heart and soul is also arriving"

Why did Nelson Mandela take "no easy walk to freedom"?

For what was he "prepared to die"?

So that the World Bank and the International Monetary Fund now ransack South Africa in a huge wholesale "sell-out" in favor of a powerful black middle class? Why did ex-wife Winnie Mandela exclaim: "This is not the South Africa I ruined my life for?"

Yes, the answer is blowing in the subtropical wind of Durban, Natal, of KwaZulu.

At a protest march of 5000 South African shack-dwellers who came from 35 informal settlements and who were mourning the “death of freedom," their leader S'bu Zikode synthesized the sad moment of truth about a promising social revolution that was betrayed, was nipped in the bud.

Across a whole century the South African Revolution against colonialism and fascism eventually a decade ago degenerated from a "class struggle" into a "race struggle," into reconciliation commissions of "truth," into class consensus, into savage "neo-liberalism," into North American and European corporate imperialism.

This historic development should never happen to the Bolivarian Revolution! Venezuela cannot tolerate a new class of Cisneros, Mendozas and Capriles dressed in red! Concerning such exploitation, let us hear what S'bu Zikode has to say.

He asked: "How can we celebrate freedom when we only hear tales of freedom or see people’s lives changed for the better in other parts of the country, but never in our communities? ... We are the forgotten people who are expected to be content with sharing five toilets among 5000 people. How can a community of 5000 people celebrate when it is expected to make do with six taps?” (From Green Left Weekly, May 3, 2006.)

Now, let us briefly move towards the current hottest moment of truth for Venezuela, Iran and the USA.

At first, we should recall that in 2001 Venezuela's ambassador to Russia spoke about the eventual switching to the euro currency for all oil sales. Within a year the "Empire" reacted with a coup attempt on the Venezuelan government, with a massive oil sabotage. Iraq had the same strategy, it was brutally invaded.

* With the aid of the international mass media, and the assistance of the CIA, ever since Chavez has been categorized as a Hitler, a dictator, a menace and a tyrant; his name now appears just below that of Iran's President on the "terrorist" list of America's most wanted "criminals."

And many of us, in total ignorance of global historic reality and processes ... permanently sawing the only ray of hope on which we still sit ... try very hard to give Chavez the final "Et tu Brute!" Golgotha piercing!

What connects Venezuela and Iran to the USA is simply oil. It is the danger that in future progressively oil would be sold globally in euros per barrel.

A few days ago, Mike Whitney, in his article "The Last Gasp of the Dollar? Iran bourse opens next week" confirmed what we have been analyzing all across the year 2005. He quotes the Russian political scientist Igor Panarin as saying: "'Everybody knows the real reason for American belligerence is not the Iranian nuclear program, but the decision to launch an oil bourse where oil will be traded in euros instead of US dollars… The oil market will break the dominance of the dollar and lead to a decline of global American hegemony.'”

Now, even the Associated Press begins to approximate the moment of truth, recognizing that an Iran oil bourse “could lead central bankers around the world to convert some of their dollar reserves into euros, possibly causing a decline in the dollar’s value."

Because the whole globe is practically drowning in US dollars, the United States economy could fall into a super-recession that could skyrocket the prices of oil, energy, housing and food to dimensions unknown until now, should the Iran bourse obtain its full objective to inspire all OPEC countries threatened by "Big Brother" to demand euros for their barrels of oil. In fact, such a move would be equivalent to an economic nuclear preemptive strike on Washington D.C.

Precisely this emancipatory lesson should be taught to Bush and his military industrial complex. There are more economic, political and social "arms of mass resistance" in store, stockpiled across the globe, that could be applied to topple the "Empire." In fact, there are measures that could scare the hell out of the bosses of the whole world market. For example, what about the catastrophic effects of a global workers' strike, a stay-at-home for just a month? How much "collateral damage" would this labor atomic bomb cause? It could put NASA, the Pentagon and NATO in total jeopardy, it even could wipe out mankind!

However, should we ever be able to organize such a global attack, it would not even be imperative to launch it at all any more. To reach such a high level of global class consciousness ... which the current corporate ruling classes have achieved globally already ... would mean that long before we have destroyed capitalism and imperialism already.

Meanwhile, as we have warned in previous editorials already, apart from the Truth, the following is the Achilles' Heel of the North American economy: " Currently, the national debt is a whopping $8.4 trillion with an equally harrowing $800 billion trade deficit. (7% of GDP) The ever-increasing demand for the greenback in the oil trade is the only thing that has kept the dollar from free falling to earth. Even a small conversion to euros will erode the dollar’s value and could precipitate a sell-off. "

It becomes clear what economic strike Iran is planning against the "shock and awe" of Donald Rumsfeld, and also how desperate and crazy the military junta has become, should it dare to attack. Economic adviser, Peter Grandich hits the death nail in Bush's coffin: “The only one who doesn’t know the US dollar is dead is the US$.”

Hence, as we said long ago already, one morning we will wake up and the USA will be no more. Let us prepare for the Yankee requiem, for the evil spirit that will threaten us via Zulia.

* O, what a fall, my country(wo)men, then you and I, all of us will be falling into the bottomless, dark abyss of belligerent megalomania of a small military clique in power that desperately defends American corporate interests in an ailing economy.

Common folk, the hundred millions of people of the United States of America, are you still nostalgic, dreaming about your "founding fathers," your "bill of rights," your "American Dream"? We don't blame you, if you still do, however, remember, now you have an Apartheid Homeland.

Did you know that your Homeland has patriotic concentration camps already? Well, open your eyes very wide, look around, look at your democratic elections, of, by and for yourselves, look at your health schemes, your education, your housing conditions, your winter, your future. Gone is the "land of golden opportunities," the "Great Society"!

* Corporate America is preparing an "Endlosung," an end solution, once and for all, to "scapegoats" and "black sheep." to domestic and foreign "terrorists."

North America, long ago, at the eve of the attack on Iraq, when the USA had already issued an ultimatum to Saddam Hussein, on March 18, 2003, I appealed to you as follows:

"Revolutionary and emancipatory humanity,
wake up from your American consumer slumber,
get rid of your strychnine pills of mass ideological delirium!

It is the eleventh hour, Big Brother said it:
"It's the Moment of Truth!"
Distance lends enchantment to the view.

We do not see your beautiful America anymore,
we see a bloody global Fascist Monster,
a globalized blood-hungry Dr. Frankenstein,
a corporate blood-sucking Dr. Dracula,
an Orwellian cold-blooded Dr. Croesus."