"Under-nutrition should not be accepted in a country like Iraq, with its wealth of resources..." Malnutrition among Iraqi children has reached alarming levels, according to a UNICEF survey showing people are struggling to cope three years after US-forces overthrew Saddam Hussein. The report on food security and vulnerability in Iraq said almost one child in every 10 aged between six months and five years, suffered acute malnourishment. "Children are major victims of food insecurity," it said, describing the situation as "alarming". 15 per cent of households are classified as "Extremely Poor." A total of four million Iraqis, roughly 15 per cent of the population, were in dire need of humanitarian aid including food, up from 11 per cent in a 2003 report, the survey of more than 20,000 Iraqi households found... 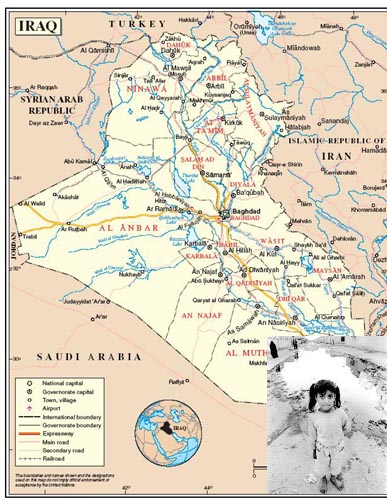 "BAGHDAD, 8 May - One in three Iraqi children is malnourished and underweight, according to a report released by the United Nations Children's Fund (UNICEF) in Amman on 2 May..."

"Under-nutrition should not be accepted in a country like Iraq, with its wealth of resources,"

The children of Iraq are caught up in war for the third time in 20 years.

The aftermath of the US-led invasion has seen widespread violence, with militant and sectarian attacks and killings preventing a return to normal life for many Iraqis and hindering humanitarian aid efforts.

"Decades of conflict and economic sanctions have had serious effects on Iraqis," the report said. "Their consequences have been rising unemployment, illiteracy and, for some families, the loss of wage earners."

The survey was conducted by the ministries of planning and health supported by the UN World Food Program and the UN Children's Fund UNICEF.

David Singh, a spokesman for UNICEF's Iraq Support Centre in neighbouring Jordan, said the number of acutely malnourished children had more than doubled, to 9 per cent in 2005 from 4 per cent in 2002, the last year of Saddam's rule.

"households could no longer afford the expenses of schooling, that the schools were located too far away from home and that some children had to be sent to work to supplement household incomes...

"increased unemployment, illiteracy, weakened infrastructure – power and water and sanitation in particular – and the direct loss of wage-earners for many families."