My first full afternoon in Parliament square. It is now around the 1800th for Brian..... 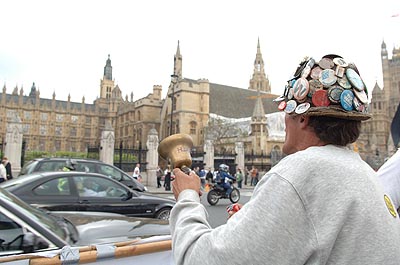 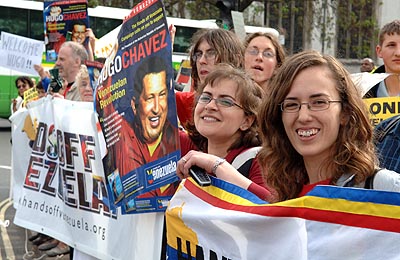 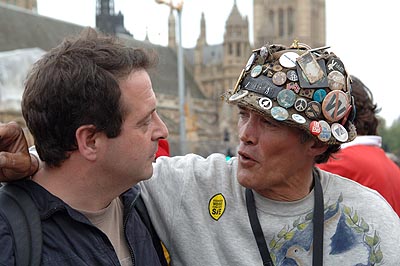 Mart Thomas drops by to show his support.

Following the recent ruling Brian could be removed by the cops at any time. Of course they are not going to bother today. A rumour has been circulating that Mr Chavez of Venezuela is going to pay Brian a visit. Brian is totally indiferent to the idea concentrating more on shouting war statistics at the armed cops guarding Parliament opposite. Mark Thomas drops by to show his support for Brian. The presense of numerous journos and Chavez supporters ensures Brians safety for today.... This just leaves the problem of tommorow and the day after and the day after that...ect. The more people who take an interest in Brian and his protest the harder it will be for them to get rid of him.

The fact the recent court decision came from Police fears that Brian's protest was a security threat proves two things:
1) Despite their claims otherwise, the Police are totally political and working to a government agenda.
2) The idea that one or two people staying 24/7 in a very busy area (that probably has more cameras than anywhere else in the world) is ridiculous. They really do think we are this gullible?

Dont discuss, Do something.....