The Palestinian Nakba -Report and Photos from Oxford Vigil 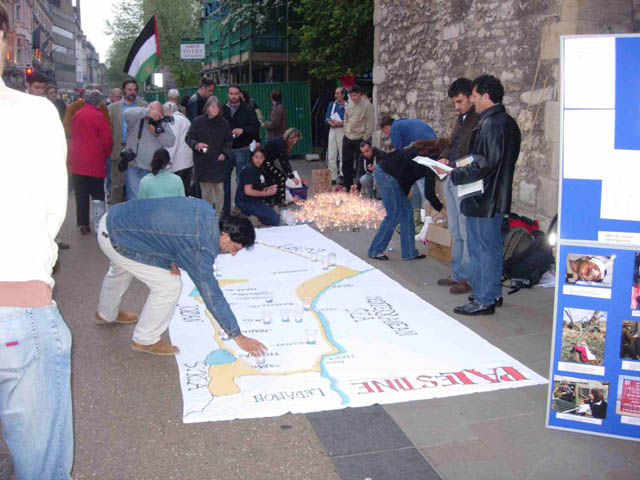 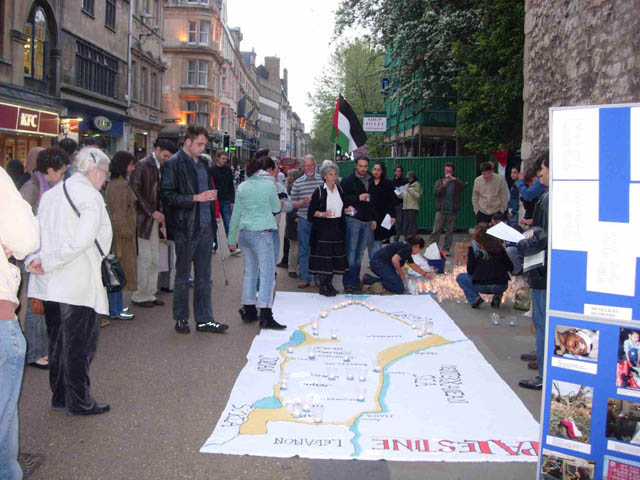 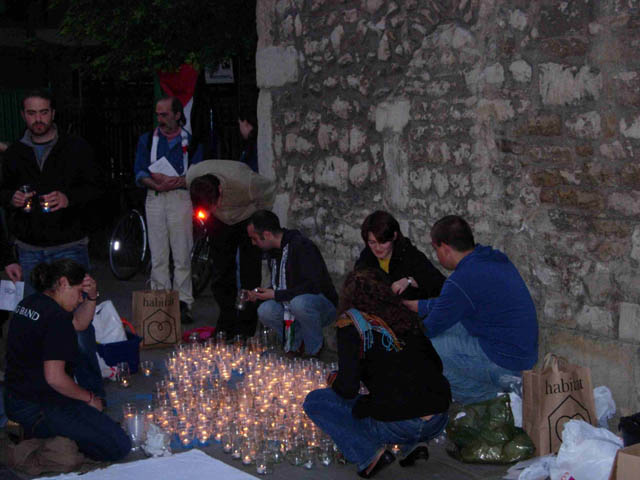 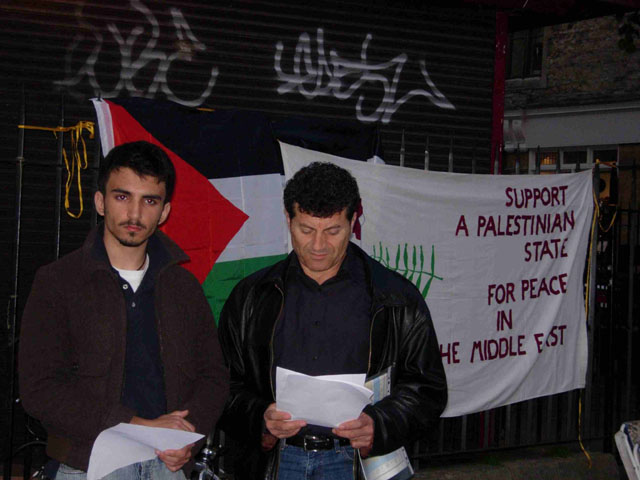 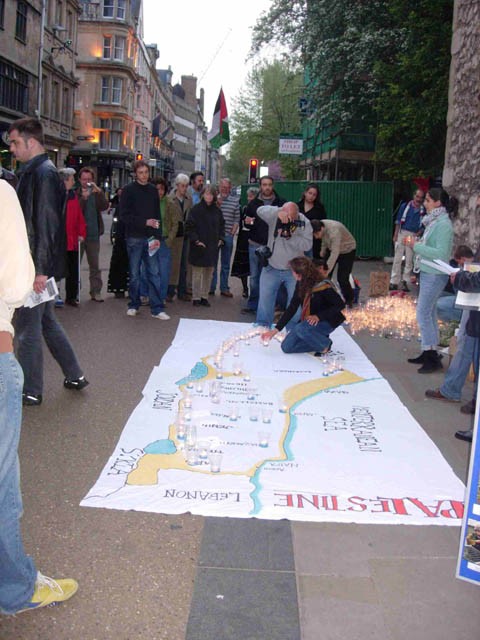 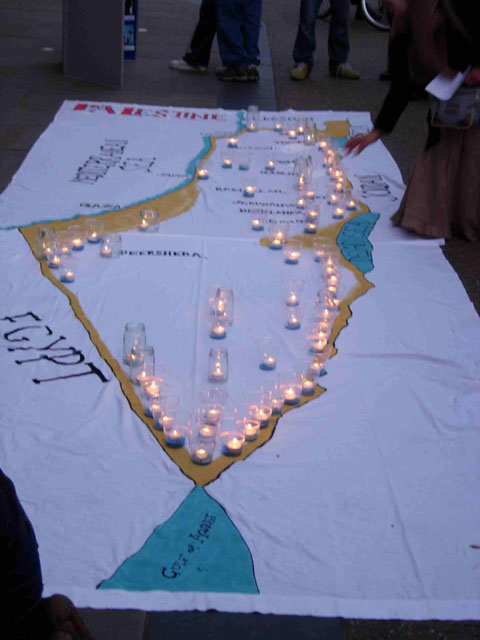 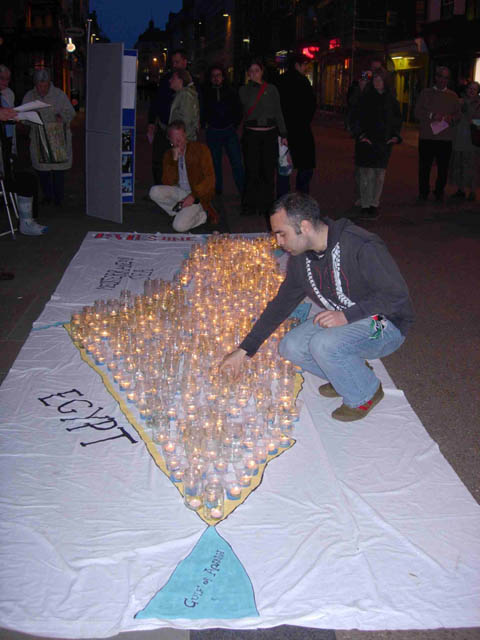 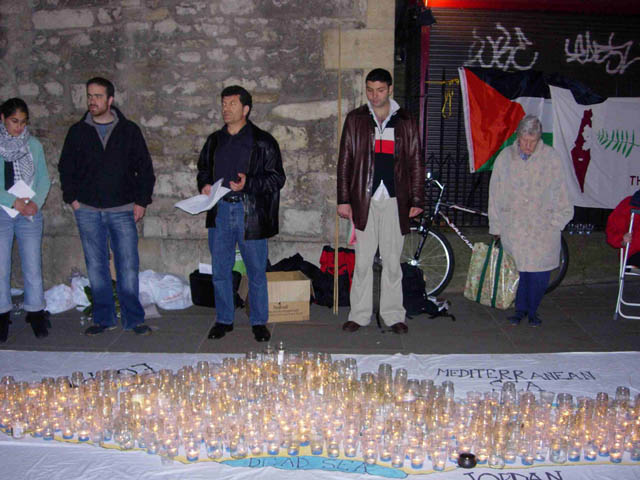 The Nakba witnessed the destruction of over 500 Palestinian villages, the killing of 13,000 Palestinians, and the expulsion of 750,000 Palestinians from their homes and lands between 1947 and 1949.
During the vigil the names of all the destroyed villages were read out. A candle was lit for each village and placed on a large map of Palestine. Passersby stopped to participate in the vigil, to find out more about the Nakba and to light a candle. When all villages had been named and all 500 candles lit the vigil ended with the naming of the villages where massacres occurred and people stood in silence to remember the 13,000 who were killed.

Events for the remainder of the week are:

But do not forget

2. The stated Arab aim was absolute destruction and murder of Jews in Mandate Palestine

3. Jews accepted Partition, the Arabs did not and fighting started after this rejection

4. The Arab armies started the fighting

5. The majority of the land lived on by Jews was uninhabitable dessert and swamp land which the Jews turned into farmland

6. The massacre of Jews at Gush Etzion

7. The Palestinians were led by Haj Amin Al Husseini who wanted to set up death camps for Jews and consulted Hitler on this.

1) So that makes it ok to kick a million people out of their homes??? Why should Palestinians pay the price for Nazi crimes?

3) No wonder the Jewish people accepted - it gave what had until recently been a tiny minority control over the majority of the country. Why on earth would Palestinians accept that they should live in a Jewish state when the majority of people are not Jews? What other nation would?

4) Very debatable. But for arguments sake lets say its true - because Palestinians were having their aspirations of a nation taken from them.

5) A land without people for a people without land - that was the old slogan... cant believe people still buy this crap! Strange how so many old Palestinian villages are now populated by Jewish communities

6) Hebron 1929 as well... a crime and a tragedy. But tensions between the Jewish and Arab communities were exacerbated by Zionist talk of creating Israel and mass immigration with the aggressive intention of denying Palestinians their state.

7) Yes he did support Hitler... unforgiveable. But I sincerely believe the majority of Palestinians were and are not anti-semitic.

Except that its not true that "a million people" were kicked out of out of their homes. The leaders of the Arabs ordered the Arabs to clear the battlefields so that they could anhilate the Jews. Then the Arabs lost,despite having the combined armies of 7 Arab Nations. So it has nothin gto do with" Palestinians pay the price for Nazi crimes" although they were Nazi allies.

The Jewish people accepted the partition plan in the interests of peace. Read William Ziff's "Rape of Palestine". At a certain period in history, there wer emore Moslems in all of Palestine than Jews, although Jews were the majority in Jerusalem for centuries. Many of the Moslems were immigrants themselves .

Prior to 1948, there wasno such thing as "Palestinians were having their aspirations of a nation". In fact, had the Arabs won in 1948, we would never have heard the word,"Palestinian" as the area would have been divided up among Syria, Jordan Egypt and Lebanon.

Hebron 1929 as well... a crime and a tragedy. But tensions between the Jewish and Arab communities were exacerbated by the Grand Mufit Al Husseini inciting the Arab peasants by lying to them and saying "that the Jews swere going to destroy the Dome of The Rock." Further, the Arabs resented the idea that Jews, a Dhimmi people, whowere supposed to be subservient to Moslems and second class could have even basic civil rights.

If you "sincerely believe the majority of Palestinians were and are not anti-semitic" then read what they actually say about "the Jews". Its shocking tohear in this modern era.