Around 50 people attended a public meeting yesterday in Sheffield to oppose the widening of the M1 motorway and to demand a radical change in government transport policy to sustainable solutions. 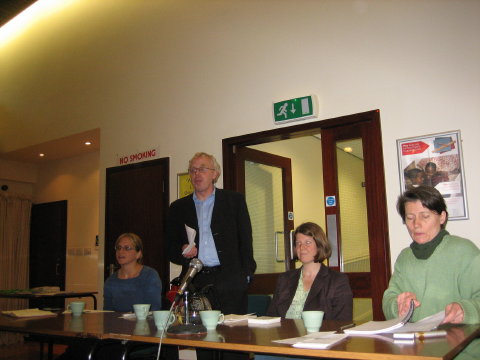 speakers at the meeting 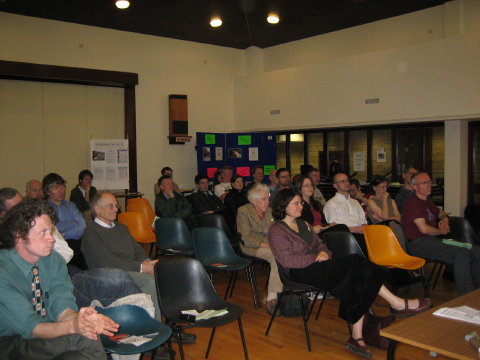 Invited by the No Widening M1 Campaign

http://www.nowideningm1.org.uk
senior anti-road and climate protection campaigners Becca Lush (Road Block) and Tony Bosworth (FOE) introduced key arguments against the building and expanding of roads in face of climate change and energy over-consumption.
Bosworth, looking at the larger picture of transport policy, pointed out, that the government subsidised air travel and motorways with billion of pounds. He said: „Cheap flight do not seem to be that cheap anymore, when you consider that the government is handing 9 Billion Pound over to the aviation-industry annually in subsidies, that is 300 Pound per citizen per year.“
As expensive as the support for air travel is the building of roads while it doesn’t seem to solve traffic problems. While it takes 28 Million Pound to build a mile of motorway, research had shown that new roads are only filling up with new traffic that was generated by them. „You can’t build your way out of congestion“ - the motto of the no-widening campaign - is in fact accepted science.
As Lush explained the governments own Highway Agency was well aware of the futility of building more roads, yet the policy outcome of the Labour government was a 9% real decrease of the costs of motoring, while Busses became 15% and trains 5% more expensive.
„This is sending the wrong signal when we are threatened by climate change.“
While transport is responsible for 27% of all UK CO2 emissions, motorised transport, cars and lorry cause 95% of the whole transport emissions.
Both speakers demanded a change in government policy towards a more sustainable and environmentally sound transport policy. „Spending 3 Billion Pounds not on widening the M1 but on more attractive and cheaper public transport would make a huge difference“, said MP Julie White who works with the No Widening M1 campaign in Sheffield.
Green Party councillor Jillian Creasy, who chaired the meeting, demanded a socially and environmentally sustainable transport policy from the government.
While considering the lobbying important, several people in the audience explained that in face of the urgency to protect the climate, direct action against more roads had to be considered.

Ways to join and support the protest:
The next meeting of the No widening M1 campaign in Sheffield: 4th June, The Rutland Arms (paternoster row), 7.30 pm