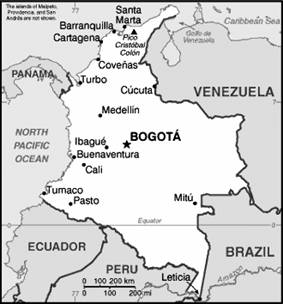 Members of Proceso de Comunidades Negras (PCN) are to visit Sheffield as part of a European tour. They want the world to know of the violence and injustice suffered by Colombia's poor majority, especially black and indigenous peoples, of their resistance and of their determination to achieve social justice and protect nature.

Afro-Colombians, a fifth of Colombia's 45 million people, are concentrated in the lush and resource-rich lands along its Pacific coast. For years, they've been subjected to cruel repression by right-wing paramilitary forces attempting to clear their land for "development" by local businessmen and foreign investors.

Afro-Colombians figure disproportionately among Colombia's 3 million internal refugees. Many PCN activists and leaders have been assassinated, a fate met by thousands of Colombian trade unionists, students and community activists each year.

Please make sure that Jorge, Arcenides & Maria receive a warm welcome to Sheffield. Come and hear how, in face of great odds, their struggle continues, and discuss how we can make a difference!