I killed over 200 innocent people!

'If he didn't answer the way we liked, we would shoot his youngest kid in the head': Ex-GI 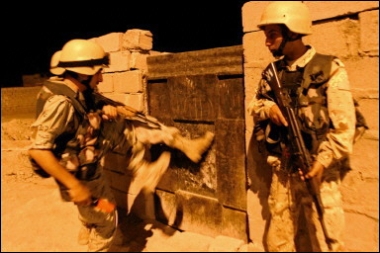 We would shoot his youngest kid...

Former Army Ranger and Iraq War Veteran Tells All
May 21, 2006

This interview will change how you view the U.S. occupation of Iraq forever. I cannot possibly recommend this more highly. An Iraq war veteran tells of atrocities he and other fellow-soldiers committed reguarly while in Iraq. I have never seen this level of honesty from a U.S. soldier who directly participated in the slaughtering of Iraqis. (with VIDEO)

Crossposted with commentary at

A little bit better definition at

http://video.google.com/videoplay?docid=-5587990522549547050&pr=goog-sl
No wonder the guy has a stammer, reliving horrendous war crimes
Whatever the overt atrocities admitted to here, it is worth observing that maybe 50% of terrorist outrages in Iraq, against queues of people waiting for work, against the Samarra mosque, against religious gathering, against the UN and Red Cross are most likely concoctions of the British SRR or SAS, or similar US units, aimed at creating chaos for the newly installed government, and resulting in a tripartite ethnically cleansed nation without power according to the neo-con map
Just like they manipulated the former Yugoslavia
Iran next

He was Never in the U.S Military

I am a former Ranger and my son is currently w/ 3d Ranger Bn. This guy is the most obvious fake I have ever seen. He should hope he never meets a Ranger in person after this traitorous performance.

In addition to the other indicators of phoniness, consider these:

* He has a profile page at military.com. On it he claims to have three combat parachute jumps (stars on his jump wings. Sorry, Jessie, but no one in 3d Bn made three combat jumps in 2001-05.

* He claims to be Special Forces qualified. (Claiming to be a “Special Forces Ranger” is almost a sure way to spot a phony. But, if he was SF and Ranger qualified, he would not be an E-4, unless he was busted. Although he claims to have an SF scroll, he does not list SF as his unit.

* He claims to have two CIBs. He would not have been awarded two CIBs for service between 2001 and 2005.

* He claims to have been shot, wounded w/ shrapnel and stabbed (multiple times), but only claims one Purple Heart.

* He claims to have been w/ the Rangers in Iraq for 16 months. Some reporter should ask him which company he was with and how long their tours were. The Rangers don’t go for one year tours like other Army units. And, public reports show that some of 3d Bn’s time has been in Afghanistan, not Iraq.

Can you provide a credible link to support such a stupid claim? No didn't think so! Iraq is a pandora's box stupidly opened by the UK/US however the SAS etc do not carry out the terrorist bombings, furthermore the original post is bollocks as well, look at what the SAS protestor Ben Kingsly said, he accused the US of war crimes but nothing like what is alleged here, i would urge scepticism and advise against being led into la la land by posts like this one, this guy never killed 200 people!

There is one big snag with this story

Jesse Norman was never in the US Army.

The Truth about the terrible war crimes by the US Army hurts but it is the reality.

The US has committed a huge amount of horrendous crimes against civilians (especially in Fallujah) but the mainstream media don't like to show the truth for fear of being "un-patriotic".

Sorry Friends. The USA in not the greatest country in the world.

... jessie norman was (is) an opera singer sceptic tank me old yank

Jessie McBeth is the soldier in question.

Are we having another Dhal Jamill moment?

Do [they] want us to invest our energy and enthusiasm 'proving' the very existance of those who decry the war machine?

Let them waste their time 'proving he doesn't (and sit back and enjoy the semantic gymnastics as theytrie and 'prove' a negative ...

... THE REAL ISSUE IS NOT ABOUT THE MESSENGERS ...

THE MILITARY INDUSTRIAL MACHINE KILLS WOMEN AND CHILDREN FOR MONEY.

Anybody care to debate that?