The UN report comes a day after several suicide attempts and a clash between prisoners and guards at Guantanamo. According to the US military, several prisoners wielding improvised weapons attacked guards as they entered a communal living area to stop a prisoner who was trying to hang himself. There have been 39 suicide attempts at Guantanamo since the prison opened in January 2002. 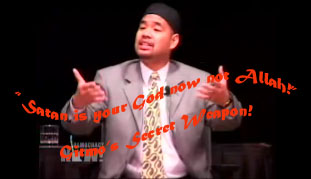 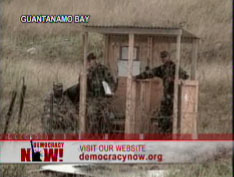 Ex-Guantanamo Chaplain James Yee on Faith and Patriotism Under Fire

James Yee, a Muslim Chaplain, was posted in Guantanamo Bay, in 2002, but less than a year after serving there, he was accused of espionage by the military and faced charges so severe, that he was threatened with the death penalty. Yee was locked away in a Navy prison in Charleston, South Carolina, spent 76 days in solitary confinement and was subject to abusive treatment. In 2004, the government dropped all charges against him. [includes rush transcript]

The UN Committee Against Torture also urges an end to secret CIA prisons and an end to abusive treatment and interrogation techniques against detainees. In addition, the panel sharply criticized practices in regular prisons in the United States including widespread sexual abuse of inmates. [includes rush transcript]

The U.S. has rejected calls by the United Nations for the closure of its prison camp at Guantanamo Bay, Cuba.

Secretary of State Condoleezza Rice said "We cannot be in a situation in which we are just turning loose on helpless populations or unprotected populations people who have vowed to kill more Americans if they're released." There are about 460 prisoners held at Guantanamo Bay. Most have been held for more than four years without charge.

A UN panel said Friday the indefinite detention of prisoners at Guantanamo violates the world"s ban on torture. In issuing its report, the Committee Against Torture recommended the closure of Guantanamo, an end to secret CIA prisons and an end to abusive treatment and interrogation techniques against detainees.

The UN report comes a day after several suicide attempts and a clash between prisoners and guards at Guantanamo. According to the US military, several prisoners wielding improvised weapons attacked guards as they entered a communal living area to stop a prisoner who was trying to hang himself. There have been 39 suicide attempts at Guantanamo since the prison opened in January 2002.

The 11-page UN report was issued after four days of hearings in Geneva. It was the first time since the start of the administration's so-called war on terror that the U.S government was subject to questioning by international body about treatment of detainees in U.S custody.

The UN Committee Against Torture is in charge of monitoring compliance with the UN Convention Against Torture. That treaty prohibits its signatories from using cruel, inhuman and degrading treatment on prisoners and mandates that countries ensure that any detainee is given minimum legal rights. The U.S ratified the treaty in 1994.

The U.S government's delegation was headed by John Bellinger III who is the legal advisor to the State Department. This is him on Friday, responding to the report.

John Bellinger, U.S State Department Legal Counsel
The report released this weekend is the most recent call for shutting down the detention center at Guantanamo Bay. Earlier this month, British Attorney General Peter Goldsmith called for the prison to close saying it was “an unacceptable symbol of injustice.” And in February, the UN”s Commission on Human Rights called Guantanamo illegal and said it should be shut down.
Gabor Rona, International Legal Director of Human Rights First

AMY GOODMAN: The U.S. government’s delegation was headed by John Bellinger, who is the Legal Advisor to the State Department. This is Bellinger on Friday responding to the report.

JOHN BELLINGER: The committee’s conclusion was that detaining persons indefinitely without charge is a per se violation of the convention. Well, that's just simply legally inaccurate. There is nothing in the convention that says anything about holding people indefinitely. This is an issue that we know is out there, but there is nothing in this convention that says anything about holding people, so it's outside of the scope for them to be calling for the closure of Guantanamo. This convention has to do with torture, and we have said that torture is clearly prohibited. Torture is prohibited in Guantanamo. It’s prohibited anywhere in the world by any of our U.S. government agencies holding people anywhere in the world. It's also simply wrong, as a matter of law, to state that holding individuals indefinitely without charging them is wrong. In any kind of a war, you hold people indefinitely, until the end of the conflict, without charge.

AMY GOODMAN: That was John Bellinger III speaking on Friday in Washington, D.C. The report released this weekend is the most recent call for shutting down the detention center at Guantanamo Bay. Earlier this month, British Attorney General Peter Goldsmith called for the prison to close, saying it was, quote, “an unacceptable symbol of injustice.” And in February, the U.N.’s Commission on Human Rights called Guantanamo illegal and said it should be shut down.

We're joined now in our Firehouse studio by Gabor Rona. He is the International Legal Director of Human Rights First. He was at the hearings last week in Geneva. And on the telephone with us from Norway, we're joined by Dr. Nora Sveaass. She is one of ten members of the U.N. Committee Against Torture. She's also a psychologist with the Norwegian Center for Studies on Violence and Traumatic Stress. We welcome you both to Democracy Now! I wanted to begin with Dr. Sveaass. Your committee came out with this report. Can you summarize it for us? What were the most egregious violations you found, causing you to call for the closure of Guantanamo?

DR. NORA SVEAASS: Well, thank you very much for this opportunity. I would like to start with underlining the importance of this kind of work, that the conclusions that’s called now, the report, is actually recommendations on the committee. After having considered the report, the first submitted by the state party, in this case the U.S., so we had a different set. Several days we were able to discuss and highlight several issues. So what's in our report now are the concerns that are still left after this discussion.

And basically, I think the main issue here is that there is an absolute prohibition against torture and that this should be respected by all state parties. And the absolute prohibition, it also applies to armed conflict, and it applies to all territories under the jurisdiction of the state parties, and it also covers all personnel involved in law enforcement control, etc., also private contractors or non-U.S. citizens involved in operations and special missions. So it was [inaudible] that perhaps the most vital point to underline is that the prohibition must be respected absolutely. Also, in situations where it's referred to in intelligence or to [inaudible] as has been the case as to Guantanamo. I think that would be perhaps the most important issue that we discussed, and it’s also in our recommendations.

AMY GOODMAN: Gabor Rona of Human Rights First, you were there in Geneva, and you were also here when the committee came to the United States. Can you explain the significance of this panel and also the level of cooperation of the U.S. government?

GABOR RONA: First, thank you for having me on, Amy. The significance of this entire process is that, in addition to what you mentioned, this is the first time that the U.S. has come before the scrutiny of an international legal body since the terrorist attacks of September 11, 2001. This is not a situation in which the U.S. appeared because it was being called on the carpet. Quite the contrary. States are required to file periodic reports to the committee, which is charged with monitoring compliance with the torture convention, and the U.S. is a party to the torture convention. So this is a routine process.

What I think was not routine, though, was the fact that the United States sent a large and very high-level delegation to Geneva to appear before the Committee Against Torture, expressed its respect for the process and for the expertise of the members of this committee. It's an independent committee. It's not a political committee. The people on the committee are experts in their field. And the United States presented very detailed information about its legal arguments, asserting why it felt it was in compliance with its international legal obligations, but did not present a great deal of information about its practices, the facts.

And it was gratifying to see that the committee rejected much of the United States' legal posturing, invited the United States to provide more information about actual practices, and in no uncertain terms was critical of the United States’ practices of secret detentions, of interrogation techniques that amount to torture or cruel, inhuman and degrading treatment, of the process of extraordinary rendition, which is nothing more than enforced disappearances, and of several practices taking place within the U.S. criminal justice system, supermax prisons, and police stations.

AMY GOODMAN: We only have a minute, but how significant is this? I mean, it’s an international body. The Bush administration has been, for a while now, rejecting international treaties and bodies’ recommendations?

AMY GOODMAN: Well, I want to thank you very much for joining us. They have also called for an investigation of the Chicago case, where a judge has said the report should be released on at least two decades of perhaps close to 200 men being tortured in Chicago jails. Gabor Rona, thanks for being with us, from Human Rights First; and Dr. Nora Sveaass, a psychologist with the U.N. Committee Against Torture, speaking to us from Norway.