BNP attempts to regain lost cred in Barking and Dagenham

After meeting fiasco, the BNP tries to bluster its through its embarassment 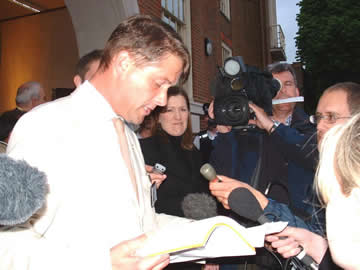 The British National Party has gone on the offensive in a vain attempt to gain back the momentary cred it got for the election of its eleven councillors in Barking and Dagenham. Desperate to fend off the damage caused by the BNP's stunningly dreadful showing at its inaugural meeting as the official opposition, which we reported on here, courtesy of the Barking and Dagenham Recorder, the party is seeking to deflect the truth with the usual mishmash of lies and bullshit, claiming that the ruling Labour group plan to use tricks, deception and red-tape to prevent BNP councillors 'working on behalf of the voters'. If that ever happens it'll be a first.

In an article entitled 'Proud people in a rotten borough', the BNP referred to the 'peurile antics' of the Labour group, which they call a 'rotten shower'. I say, chaps, steady on.

Before the full council meeting began, the BNP gang met with their party leader Nick Griffin, who 'discussed and advised everybody about what they may encounter at this first full meeting'. Like he'd know. Most BNP councillors never turn up to meetings at all and those who do are generally too stupid to understand what's going on.

During this meeting, Richard Barnbrook, the Steven Spielberg of the BNP and leader of the BNP group, managed to get a word or two in, claiming that the council had only given the new councillors the appropriate papers for the meeting on the previous afternoon, deliberately leaving the new BNP contingent too little time to scrutinise them.

This was utter rubbish, of course, which the council's officers rightly and strenuously denied when he repeated the allegation at the full council meeting. Nevertheless, Barnbrook kept interrupting the meeting by repeating this nonsense until he was finally ordered by the Chairman to sit down and shut up.

Despite allegedly not having had enough time to read the papers that were due to be under discussion, Barnbrook then took time out prior to the full council meeting for an interview with BBC Radio dressed, a la Martin Bell, in what looked like a white suit. Bell wore his suit to represent his anti-sleaze stance, which we imagine is what Barnbrook's trying to put over. Sadly, he just looks like a salesman trying to flog us a packet of Persil washing powder.

Curiously, he had had time to read at least one section of the papers because he asked in the full council meeting to make an amendment to a section entitled 'Promoting Equal Opportunities and Celebrating Diversity'. The amendment was exactly what you would expect from the BNP; infantile and pointless, with Barnbrook proposing the addition of a clause that read: 'including reducing discrimination against the majority indigenous population'. This proposal was rightly thrown out though strangely only a single BNP councillor voted to support it.

Barnbrook then went on to ask pointless questions about the Right to Buy scheme and induction courses for new councillors, neither of which had anything to do with that meeting and both of which could have been answered over the phone by one or two council officers.

The BNP report then goes on to say that its intrepid and fearless new councillors will 'make sure that there is never a boring moment' (oh, we're sure there won't be) and that 'Every scandal past and present...every bit of sleaze, corruption and wrong doing...will be highlighted, exposed and publicised... [The] Labour party are no longer going to have an easy ride.'

And nor is the BNP because the entire anti-fascist movement is going to be looking just as closely at them. 'Every scandal past and present...every bit of sleaze, corruption and wrong doing...will be highlighted, exposed and publicised.'