On Saturday 18th March, photographer and Indymedia contributor Alan Lodge - or Tash - was arrested after taking photos of armed police in public. Tash continued to deny the charge of wilfully obstructing a police officer at Nottingham Magistrates Court on Tuesday the 23rd May. A trial date has now been set for the 17th October 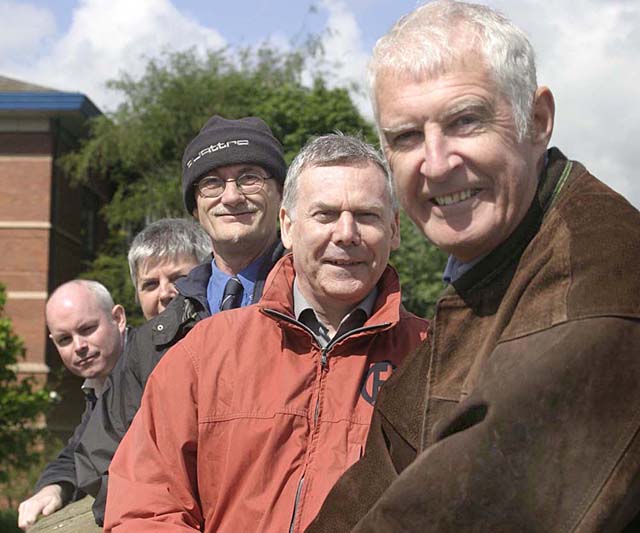 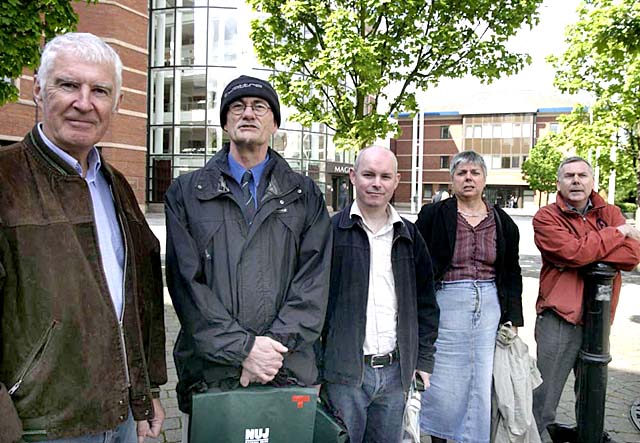 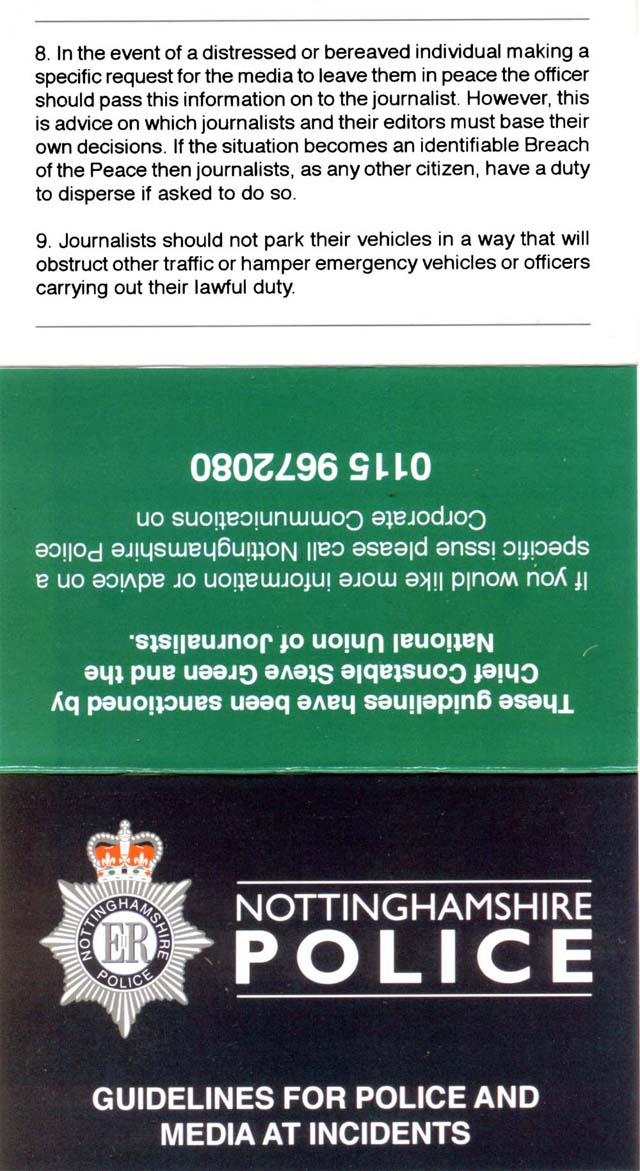 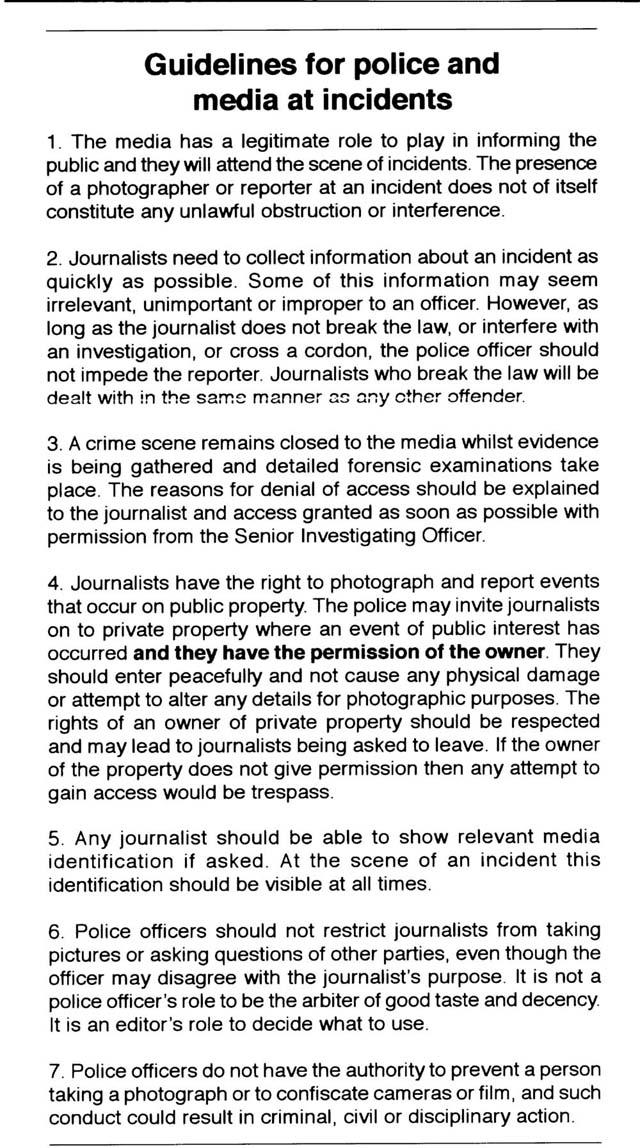 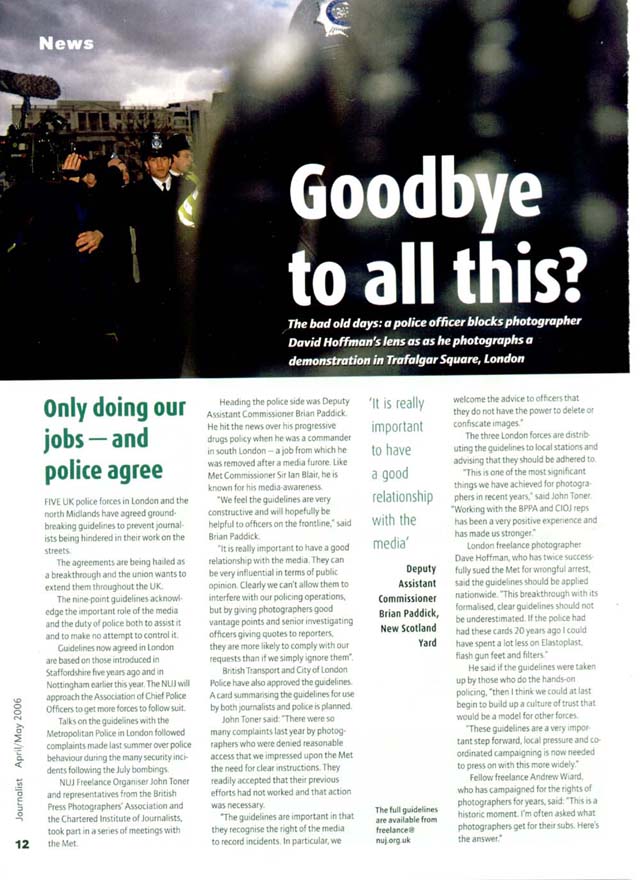 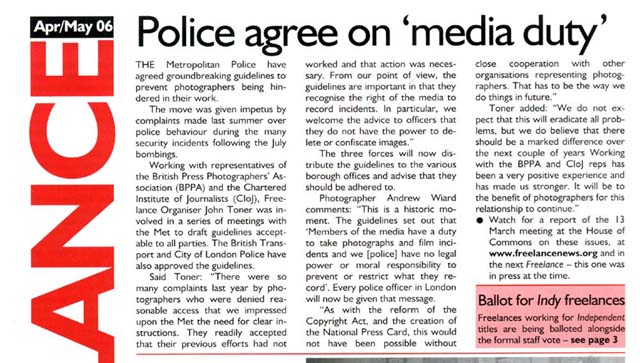 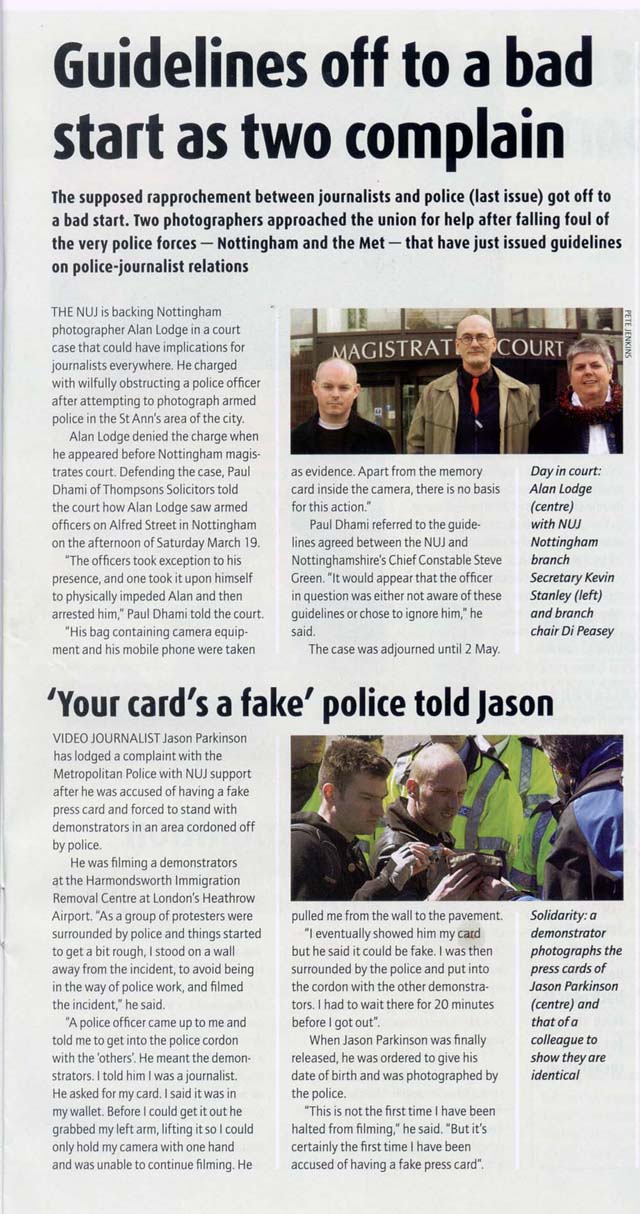 On Saturday 18th March, photographer and Indymedia contributor Alan Lodge - or Tash - was arrested after taking photos of armed police in public. Tash continued to deny the charge of wilfully obstructing a police officer at Nottingham Magistrates Court on Tuesday the 23rd May. Defending solicitor Paul Dhami told the court: "The officers took exception to his presence, and one took it upon himself to physically impede Tash and then arrested him." The arrest came only weeks after Nottingham police issued guidelines to their officers reminding them to respect journalists' rights. A trial date has now been set for the 17th October.

A trial date has been set for a Nottingham photographer, who is accused of obstructing a police officer while doing his job.

Paul Dhami, of Thompson's Solicitors, outlined the facts of the case to the bench. "Mister Lodge was taking photographs of a police armed response unit on Alfred Street, Nottingham, on Saturday 18th March. He was arrested firstly for assault, then de-arrested. He was then arrested and de-arrested for breach of the peace, before finally being arrested and later charged with obstruction."

The defence centres around new Media Guidelines, agreed between the Chief Constable of Nottinghamshire Police - Steve Green - and the NUJ, earlier this year. During the incident, Mister Lodge's equipment and memory card were confiscated. Yet the guidelines clearly state that police officers have no right to seize such equipment simply because somebody is taking photographs.

Mister Dhami told the court that he would be frequently referring to the guidelines during the trial, and that he intended to question the arresting officer about why the guideline were ignored.

The Court set a trial date for 17th October before Nottingham Magistrates and adjourned the case. Mister Lodge was given unconditional bail.

These are the guidelines, previousdly agreed, referred to above.......

GUIDELINES FOR THE POLICE AND MEDIA AT INCIDENTS

1. The media has a legitimate role to play in informing the public and they will attend the scene of incidents. The presence of a photographer or reporter at an incident does not of itself constitute any unlawful obstruction or interference.

2. Journalists need to collect information about an incident as quickly as possible. Some of this information may seem irrelevant, unimportant or improper to an officer. However, as long as the journalist does not break the law, or interfere with an investigation, or cross a cordon, the police officer should not impede the reporter. Journalists who break the law will be dealt with in the same manner as any other offender.

3. A crime scene remains closed to the media whilst evidence is being gathered and detailed forensic examinations take place. The reasons for denial of access should be explained to the journalist and access granted as soon as possible with permission from the Senior Investigating Officer.

4. Journalists have the right to photograph and report events that occur on public property. The police may invite journalists on to private property where an event of public interest has occurred and they have the permission of the owner. They should enter peacefully and not cause any physical damage or attempt to alter any details for photographic purposes. The rights of an owner of private property should be respected and may lead to journalists being asked to leave. If the owner of the property does not give permission then any attempt to gain access would be trespass.

6. Police officers should not restrict journalists from taking pictures or asking questions of other parties, even though the officer may disagree with the journalist's purpose. It is not a police officer's role to be the arbiter of good taste and decency. It is an editor's role to decide what to use.

7. Police officers do not have the authority to prevent a person taking a photograph or to confiscate cameras or film, and such conduct could result in criminal, civil or disciplinary action.

8. In the event of a distressed or bereaved individual making a specific request for the media to leave them in peace the officer should pass this information on to the journalist. However, this is advice on which journalists and their editors must base their own decisions. If the situation becomes an identifiable Breach of the Peace then journalists, as any other citizen, have a duty to disperse if asked to do so.

9. Journalists should not park their vehicles in a way that will obstruct other traffic or hamper emergency vehicles or officers carrying out their lawful duty.

These guidelines have been sanctioned by Chief Constable Steve Green and the National Union of Journalists.

Collected links about it all:

Defend the Nottingham One!
NUJ Freelance May 2006

The story has developed further, because now the MET Police, City of London Police and the British Transport Police, have all followed the model of the work done by us, here in Nottinghamshire

NUJ Freelance May06 Doing our job [with Brian Paddick, Deputy Assistant Commissioner at the MET]


The following guidelines have been agreed - so far - by the Metropolitan Police, City of London Police and British Transport Police.

I believe - and many of you believe - that a key factor in the way we work is how we treat one another and the members of the public with whom we come into contact. - Ian Blair, Commissioner

We will build trust by listening and responding. Be accessible and approachable. Build relationships. Encourage others to challenge and get involved.' - Met statement Our values


Members of the media are not only members of the public; they can influence the way the Metropolitan Police Service is portrayed. It is important that we build good relationships with them, even when the circumstances are difficult. They have a duty to report many of those things that we have to deal with - crime, demonstrations, accidents, major events and incidents. This guide is designed to help you take the appropriate action when you have to deal with members of the media.

1. Members of the media have a duty to report from the scene of many of the incidents we have to deal with. We should actively help them carry out their responsibilities provided they do not interfere with ours.

2. Where it is necessary to put cordons in place, it is much better to provide the media with a good vantage point from which they can operate rather than to exclude them, otherwise they may try to get around the cordons and interfere with police operations. Providing an area for members of the media does not exclude them from operating from other areas to which the general public have access.

3. Members of the media have a duty to take photographs and film incidents and we have no legal power or moral responsibility to prevent or restrict what they record. It is a matter for their editors to control what is published or broadcast, not the police. Once images are recorded, we have no power to delete or confiscate them without a court order, even if we think they contain damaging or useful evidence.

4. If someone who is distressed or bereaved asks for police to intervene to prevent members of the media filming or photographing them, we may pass on their request but we have no power to prevent or restrict media activity. If they are trespassing on private property, the person who owns or controls the premises may eject them and may ask for your help in preventing a breach of the peace while they do so. The media have their own rules of conduct and complaints procedures if members of the public object.

5. To help you identify genuine members of the media, they carry identification, which they will produce to you on request. An example of the UK Press Card is shown [on the paper guidelines].

6. Members of the media do not need a permit to photograph or film in public places.

8. Giving members of the media access to incident scenes is a matter for the Senior Investigating Officer. The gathering of evidence and forensic retrieval make access unlikely in the early stages and this should be explained to members of the media. Requests for access should be passed to the Senior Investigating Officer who should allow access in appropriate cases as soon as practicable.

9. Advice and assistance in dealing with members of the media is available 24 hours a day via the Press Bureau at New Scotland Yard.


See the story announcing them

the subsequent London Freelance Branch debate at the House of Commons.


Thus, if the wheels have come off in Notts, at the first test, we wonder about the sincerity of police, in thier wider adoption.

The story [can only] continue.