A legal protest in Parliament square.

On Thursday May 25th a legal demo took place when Superintendent Peter Terry of Charing cross nick licensed Mark Thomas to hold a protest in Parliament square against the licensing of protests in parliament square. 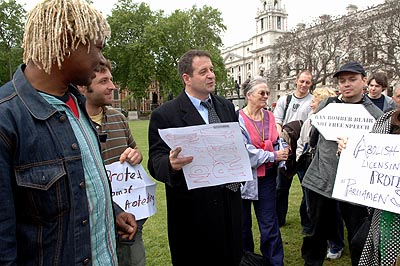 "We are hereby licenced to protest against protest licencing" 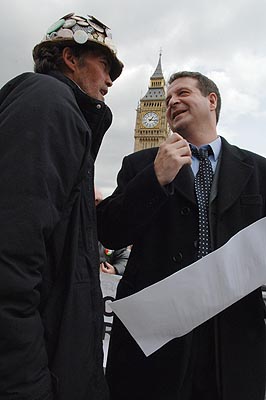 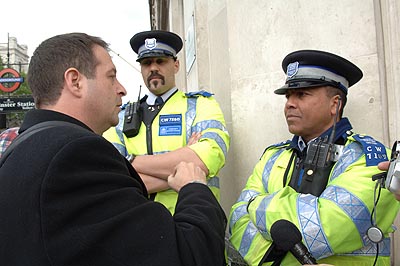 1.48pm "The gathering is still legal as they are discussing other stuff."

The demo was permitted between 1pm and 1.45pm solely for the protesting against the previously mentioned legislation. For this reason people who arrived with placards containing illegal slogans like ‘No War’ and ‘Peace’ had to be advised of their legal status and warned that they may face arrest. This turn of events seemed particularly likely when you consider the MET recently spent a mere £28,000 removing the parts of Brian Haw’s protest that did not fit within the 3 metre restriction that the law allows. Commissioner ‘Sir’ Ian Blair had tried to say that the removal had only cost £8,000. Unfortunately ‘Sir’ Ian suffers from a serious illness that affects people called Blair and their ability to tell the truth.

As Big Ben struck 1.45 those who had gathered stopped discussing politics (as that was now illegal) and started talking about non-political subjects like football and the weather. There was always the risk that these topics might lead into political territory like global warming or ‘Is it un-PC to support England?’ but no arrests were made. Sadly no Police were around to confirm the parameters of the discussion as the demo coincided with happy hour in Soho. Fortunately two community support officers were on hand to pass the message on so that any alerts concerning a terror threat to parliamentary democracy could be avoided.

On a serious note the discussion held (legally) between the hours of 1pm and 1.45pm was most engaging and productive .It was agreed by those present that the recent changes to the law with regard to Parliament and it’s surroundings area were confusing and needed further investigation. For this reason a number of (legal) demos will called in the coming days to test the possible implications for anyone wishing to make their point in countrys with a
reputation for defending democracy like this one.

Rumours were circulating that a protest was being planned for Saturday June 3rd by ‘surrealists’ which should help those who are interested determine what is political. Fears of a counter demonstration against the ‘Defence of Surrealism’ protest by ‘Cubists’ or ‘Impressionists’ have yet to be confirmed………..