Despite a total ban and threats of mass arrests by Moscow's mayor, topped up with pledges of violent counter-protests by religious leaders, local right wing groups and fascist militants, over 200 people took the streets in defiance in central Moscow for the first ever Gay Pride march in Russia on Saturday 27.

As soon as the lesbian and gay activists gathered by the Kremlin in Manezhnaya Square, strengthened by a contingent of mainly anarchist supporters and some internationals, around 100 fascists and religious fanatics started to attack them, whilst, at the same time, around 1000 riot police pushed and kicked demonstrators out of the square. But despite enduring high levels of harrassment and violence, the activists proved their stubborness in defending their right to protest, and kept coming back trying to gather. As a result over 120 people were arrested, most of which have already been released but charged with disturbing the peace and illegal gathering. 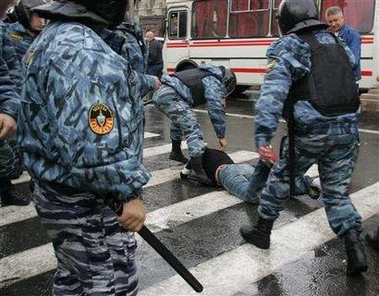 In your article you mention Russia in terms of the recent attacks on the gay pride parade, but it's also true that this year all actions in moscow have had police interventions, which activists there believe is part of the pre-G8 clampdown. A G8 food not bombs style leafletting event in March was also broken up by riot cops and several people arrested.

A Global Day of Action Against the G8 is planned for July 14th in as many cities as possible, in order that the protest against the G8 does not only take place in Russia, but also receives broad international support.

People should organise events in London and other uk cities.

On this day, we need to show solidarity with the demonstrators in Russia against the G8 and the structures of domination of which it is part. Following the themes of the 2006 G8 summit, the day of action could highlight demands for free health care and education for all, and an end to the nuclear age and action on climate change - the anti-G8 activists in Russia have also added general environmental campaigns and anti-war campaigns to the list.