G8-Xtra was a paper produced to support the mobilization against the G8-Summit 2007 under the 'interventionist left' banner. For the European Social Forum in Athens an english version was distributed which contained an article on St. Petersburg 06 - reproduced below.

The whole pdf can be downloaded from: 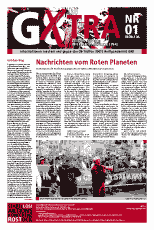 St. Petersburg Summit Must Not Be Forgotten

When, from 15th to 17th July this year, the heads of state of the eight most powerful industrialised nations come together in St. Petersburg, the conditions for protest and resistance at first seem quite unique.

First of all, despite playing host to the summit, Russia is not a full member of the G8. That Russia was granted entry into the club of the powerful at all has less to do with its economic strength than with its function as an important supplier of energy and as a geo-strategic partner. To date, Russian influence on G8 policy remains small. It is for this reason that the Russian president, Vladimir Putin, is using this summer’s G8 meeting not only to polish Russia’s image as a supplier of raw materials, but also to give added weight to his demands for full G8 membership.

Since the role of Russia in the G8 will always also be in the foreground at the meeting in St. Petersburg, the Russian elite is placing a lot of emphasis on projecting a positive image abroad.

Secondly, anti-summit protesters in Russia are confronted with new constellations of state-managed protests, and forms of defamation that have their roots in specifically Russian forms of politics. Following the model of the “Naschi”, a “democratic anti-fascist youth movement” created by the Kremlin, the Russian elite are trying to create an anti-globalist mobilisation to accompany the summit in July with demonstrations. The idea, however, is that they never go beyond displaying a consistent loyalty towards the Russian state. The image presented to the outside should be: whoever opposes the President is a nutter, a yob, an outsider, everything but an anti-globalist. These measures will, most likely, determine the media representation of events around the summit.

Other protest actors expected in St. Petersburg come from the milieu surrounding the first Russian Social Forum. In the summer of last year, almost the entire left, including members of the Communist Party of Russia and anarchist groups, participated in the Forum.

The anarchists have been mobilising for a while against this year’s G8 summit and have already invited people to participate in the protests through a number of call outs and recently at an international preparatory meeting in Kiev. Activists from Belarus, Estonia, Russia, Ukraine, Poland, Germany and Great Britain participated in the Kiev meeting and planned the days of action against the summit.

According to the protest “road map” developed there, the anti-authoritarian protests will probably begin in Moscow, attempting to forge links in the run-up to the days of action in St. Petersburg, and to debate together the upcoming actions.

In St. Petersburg itself, there will be a big action on July 15th. But despite the fact that the protest against this year’s G8 summit will face a number of challenges, due to the specificity of the Russian context, a lot of groups and initiatives from Germany have responded to the Call Out and are participating in the 2006 protests. The reason being: the summit protests in Russia are another opportunity to network and act together with left forces from Eastern Europe. The idea is to build upon links formed during the protests in Prague against the World Bank/IMF meeting in 2000, broadening the basis for international cooperation.

For some young Russian activists in particular, the protests against the G8 are their first encounter with international protests. In the same way as every summit protest always generates new perspectives and new ideas, St. Petersburg can become another important experience in international cooperation.

Through their actions, the Russian activists keep on showing that protest is possible in Russia, albeit under more restrictive conditions. International participation is not only a sign of solidarity but also an important expression of practical support for local activists. Both the anarchist scene and migrant groups in St. Petersburg have been repeatedly attacked by Nazis who have also been known to cooperate with state security forces. Migrants groups, in particular, have demonstrated several times against the attacks and murders.

Every bit of support from abroad will create more public debate and hence safer conditions in which this state of affairs can be countered. The greater the number of people who take to the streets in St. Petersburg, the more resistance to the Nazis is possible.

As the Call Out from the Russian “Networks Against G8” explains, the idea is to show the G8 that wherever they go, they will be met with protests.

In 2006, once again, the motto of the summit protest will be, “We Are Everywhere!”

A Global Day of Action is planned for July 14th in as many cities as possible, in order that the protest against the G8 does not only take place in Russia, but also receives broad international support.

On this day, we need to show solidarity with the demonstrators in Russia against the G8 and the structures of domination of which it is part. Following the themes of the 2006 G8 summit, our day of action will demand free health care and education for all, and an end to the nuclear age and war.

The power of the elites knows no limits, but our solidarity is limitless too - join the protest against the 2006 G8 summit!