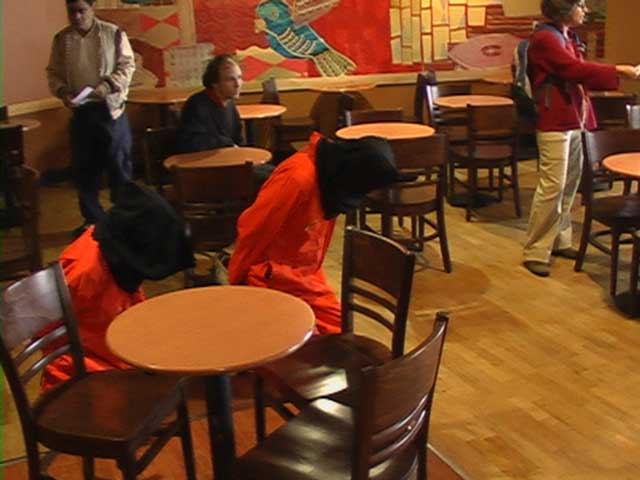 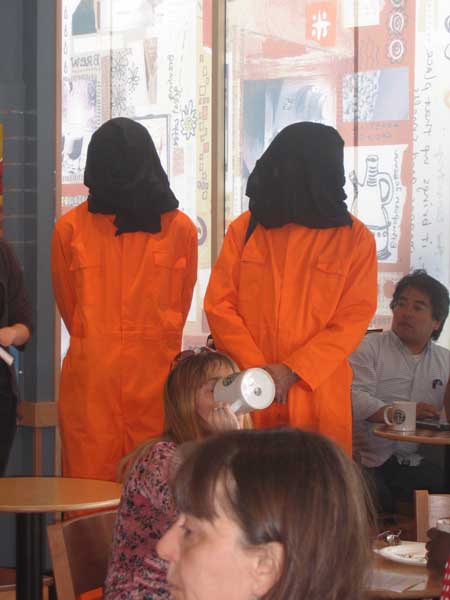 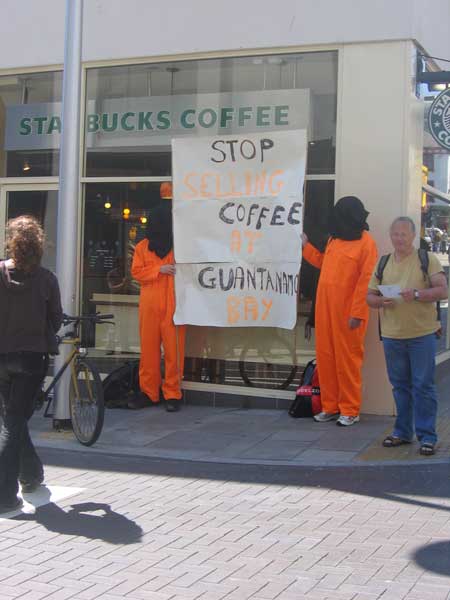 Starbucks has an outlet in Guantanamo Bay which is where our brother Omar Deghayes, from Brighton, has been held illegally without trial for over four years.

Starbucks proudly supports the US military and follows on its wake setting up shop as both attempt to conquer the world.


We read the following statement:

Guantanamo Bay is a camp outside the reach of international law run by the US military. It has been holding hundreds of people without trial for 4 years and many are being tortured. Omar Deghayes, a Brighton resident, is one of those detained.

Starbucks has an outlet at Guantanamo Bay and thus supports torture and detention without trial.

Please consider whether you want to support these crimes against humanity when you drink your coffee.


We also handed out leaflets with the following text:

Omar Deghayes is a Brighton Resident who has been locked up without trial for over four years along with hundreds of others in Guantanamo Bay.

There is little information about what really goes on at this torture camp but it has been widely reported that there is a Starbucks outlet in Guantanamo. A spokesman for the company has denied this and will only admit that they provide coffee for the US service personnel at the camp.

A company spokesman has said: “We refrain from taking a position on the legality of the detention centre at Guantanamo Bay”. The company also states: “Starbucks has the deepest respect and admiration for U.S. military personnel. We are extremely grateful to the men and women who serve stateside and overseas. We sincerely appreciate that they are willing to risk their lives to protect Americans and our values of freedom and democracy.”

This puts into question the ethics of a company that also fully supports US troops in their occupation of Afghanistan and Iraq. Although Starbucks will not take a position on the legality of detention without trial the Chief Executive Howard Schultz has taken strong pro-Israeli positions on the issue of Palestine. Some might call that double standards or hypocrisy.

Everywhere you look in Brighton Starbucks seems to have set up shop and we ask the people of Brighton not to “refrain from taking a position” on issues such as detention without trial, supporting illegal occupation and the many war crimes perpetrated by the United States.