The big boys have yachts. The small boys have row boats

I mentioned at the beginning that the big boys have yachts and the small boys have row boats. Could I suggest that both are vulnerable to shifting tides and the threat of being sunk. It is about time we spoke up and took the necessary action that would sink the rotten ship 'HMS Howard' and end this government's increasing militarisation of the region and his gunboat diplomacy. To not do so will only send us on a voyage from which no one will return unscathed. Let alone our Timorese brothers and sisters. 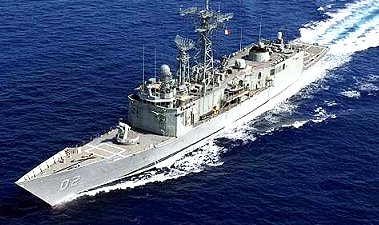 Those of us who try and keep abreast of world affairs are quite often shocked not by the subtleties of what the rulers of the world do and the back room political machinations they engage in but by the sheer audacity of the acts they sometimes commit. In the last couple of weeks, the rulers who oversee this region of the world have once more shocked us in their undisguised misuse and abuse of their power.

Like most people, I was shocked to hear that East Timor had descended into "anarchy" and "violence" again. The newspapers and TV, having just spent a week flashing the images of Wadeye in the remote coastal outback of the Northern Territory, suddenly carried images of another group of black faces carrying weapons and causing havoc. Only this time, in one sense, it had nothing to do with us as it was in another sovereign nation, albeit one supposedly close to our hearts.

It's often been said that the Howard regime is the most successful Australian government when it comes to manipulating their image in the minds of the "average" Aussie. Certainly it is true of them but image management and spin doctoring is fully embedded in the political processes of all developed nations and as much, if not more, effort is put into 'finessing the message' as is put into developing policy.

When it comes to our foreign policy our mainstream media sold us the Iraq war as a bold and dangerous adventure for the boys and girls who don the baggy cap (oops, sorry wrong Waugh there). Our military interventions in the Solomon Islands were sold to us as necessary and brief intrusions to assist our "Pacific neighbours". What was never discussed in the same context was the unjust rape and pillage of the Island's natural resources by multinationals and their need for protection from the population who were rising up against them. Now or perhaps again, East Timor, the newest nation on earth, is being subjected to Howard's gunboat diplomacy.

The question is, why are Howard and his crew so worried about the poorest, clapped out little piece of dirt in the region? Quite simply because this little piece of poor, clapped out dirt is strategically important militarily and holds the key to the natural resources that fall within its sea borders. The Greater Sunrise oil and gas field is the main game off our northern shores, not helping out the East Timorese people. "Protecting" them is, unfortunately for our service men and women, a necessary part of the PR war to convince the Australian population that we are doing 'good' for this "struggling nation".

What is not being discussed in all the acres of print and hours of TV and talk radio is how the rulers of the wealth of Australia are positioning our nation to do to East Timor exactly the same things as the US has been doing in its "sphere of influence" for the last 100 or more years. That is, intervening with full military force in the sovereign affairs of other nations. Strange isn't it, how most of those nations had resource wealth or other strategic military value. What is also strange is how these "humanitarian" interventions always led to the further impoverishment and oppression of the ordinary people in those countries. See if you can name one in which the wealth of the people and their basic living conditions has improved.

Having already confirmed Alexander Downer's comments that we could not wait for the elected government of East Timor to make up their minds as to whether external assistance was needed or not, Howard sent in the troops and police. His Defence Chief, Angus Houston, said that his troops would "use force" in a "very measured and restrained way". Our top soldier on the ground, Brigadier Michael Slater, told the assembled media in Dili that by the time he had finished the only ones carrying guns in the capital would be his troops.

This comes after calls that the East Timorese army and police should be disbanded, that the elected government should be thrown out and that the UN should take over all responsibility for overseeing the state. In short, what we have heard from the political and military rulers of Australia is that East Timor should become, once more, a colonial outpost ruled by outsiders. Only this time we will be the colonial rulers and not the Indonesians or Portuguese. Why has the current situation developed so quickly? Oil and gas.

Remember how, just a few short years ago, Howard positioned himself as the saviour of the East Timorese and how "our boys and girls" from the military and police supposedly helped build this new country? Remember how we sent over troops and helicopter gunships and warships and waited until the retreating Indonesian troops and state sponsored killing gangs had done their work before moving in? Remember how we sent Farnsy to sing to the Timorese and how our politicians hugged and slapped the backs of the newly elected leadership? Remember how the UN inspectors said the elections were free and fair? Remember the discussion about the Timor Gap? I didn't think so.

One of Australia's most rapacious companies, Woodside Petroleum, who we should not forget were prepared to sponsor an Australian politician's visit to Iraq to bribe the emerging government into giving them oil concessions, is guaranteed the wealth of the Greater Sunrise oil and gas fields that have been determined, by international law, to belong to East Timor.

In 2004 the Howard government, with the full support of the Labor party, pushed through the "Greater Sunrise Unitisation Agreement" that, if accepted by the East Timorese, would have seen 82% of the wealth flow to our Treasury and only 18% flow to East Timor. Of course, the East Timorese government rejected the deal but were bullied by Downer's department into signing an interim agreement in order to maintain, at the least, a negotiating position. What they have not done is roll over like lapdogs and allow themselves to be run over, roughshod, by our government.

The deal struck between Woodside and our government would see the Treasury in Canberra benefit to the tune of well over $40 billion over the life of the project. What Howard and Downer offered the East Timorese was deal that ensured the ongoing poverty of the nation as the Timorese leadership would have had to forego any claims on the resources they own for the next 50 years. In short, far from resolving the "Timor Gap" problem, our government wants to enshrine it. This is an act of bastardry that is unparalleled in Australian political history and would condemn the "poorest nation" on earth to a future of uncertainty and squalor.

I would suggest, without resorting to any conspiracy theories that it has been our government, in concert with the US and Indonesia, that has fomented the current "crisis" for the sole benefit of multinational resource companies and in doing so it has shamed us all.

I mentioned at the beginning that the big boys have yachts and the small boys have row boats. Could I suggest that both are vulnerable to shifting tides and the threat of being sunk. It is about time we spoke up and took the necessary action that would sink the rotten ship 'HMS Howard' and end this government's increasing militarisation of the region and his gunboat diplomacy. To not do so will only send us on a voyage from which no one will return unscathed. Let alone our Timorese brothers and sisters.