On 6 June Peace News marked seventy years of radical peace publishing. Below is press release from the day, plus an invitation to the birthday party on 17 June in London. 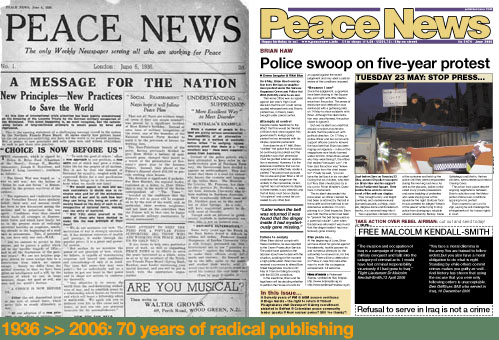 Today (ok, yesterday, but our dsl connex was annoyingly slow and so we gave up trying to post!), 6 June 2006, Peace News celebrates its 70th birthday.
First published in 1936, Peace News has been at the forefront of radical peace publishing since its inception.

True to its radical roots, the birthday will be marked by an all day event at an occupied social centre in central London to take place from 11am until midnight on Saturday 17 June. The event will focus on the issues at the core of Peace News’s current reporting, including civil liberties, the war on terror, nuclear power and weapons, antimilitarism and counter-recruitment.

History lessons
In the Second World War, Peace News was the main lifeline for conscientious objectors to the prevailing view that Britain had to fight war and oppression with organised violence of its own, managing to keep publishing despite widespread official and unofficial disapproval.

In the 1950s, Peace News played a central role in the rise of the anti-bomb movement, with the first-ever Aldermaston march being organised from its offices. Peace News went on to become effectively the unofficial paper of the radical wing of the growing nuclear disarmament movement - the Direct Action Committee Against Nuclear War, and the Committee of 100 - which existed alongside the Campaign for Nuclear Disarmament.

Peace News’s coverage of the US black civil rights movement, nuclear testing in the Pacific and apartheid South Africa exemplified its commitment to international reporting – a commitment which continues to this day.

In the 1970s, Peace News was awarded the prestigious "Scoop of the Year" award from Granada TV for breaking the story of a former SAS colonel setting up a private army. Peace News then turned its attention to direct action against nuclear power stations, and - in the 1980s - actions against cruise missiles and opposition to the Falklands war. It also gave space to exploring gender politics and feminism.

Through the 1990s, the paper continued to be at the heart of British nonviolent campaigning, covering such issues as the arms trade and the road protest movement.

Work in progress
Over the past five years, PN has been at the forefront in informing and encouraging radical protest against the invasions of Afghanistan and Iraq; in campaigning on the subsequent crackdown on civil liberties - under the auspices of the “war on terror”; and in highlighting government moves towards a new generation of British nuclear weapons.

Published as a peace journal for 70 years, in many formats and frequencies, today Peace News remains the paper of the peace and anti-war movement and continues to serve all those working for peace. The paper has always retained an essential commitment to its core values – radical pacifism, nonviolence, antimilitarism, empowerment and practical social and political action.

http://www.peacenews.info/news/article/384"
* For more on the history of Peace News, visit:

http://www.peacenews.info/specials/1936_cov.pdf
* For access to other birthday-related material online, visit