Haiti: The ICFTU, AFL-CIO, ILO, and ORIT in Haiti

The most prominent international labor organizations active in Haiti, the ICFTU, AFL-CIO, ILO, and ORIT, working to support and strengthen labor unions that agitated for the ousting of Haiti’s democratically elected government, have simultaneously refused to condemn the massive layoffs and persecution of public sector workers and trade unionists committed by its illegally-imposed successor. 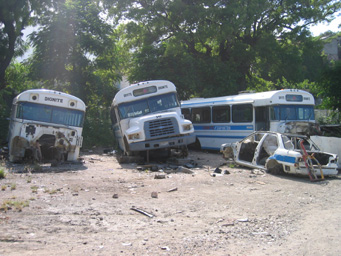 
On February 16, 2004 a group of foreign trade union officials arrived in Port-au-Prince, Haiti, amongst them ORIT General Secretary Victor Baez, ICFTU Assistant General Secretary Mamounata Cissé and union leaders from France, Canada, Guyana and the Global Union Federation. The purpose of the delegation was to assist eleven trade unionists of the Coordination Syndicale Haïtienne (CSH), accused by Haitian authorities as working to bring down the government. The labor delegation drew international coverage as Katia Gil, General Coordinator of Programs with ORIT explains, “We went to visit them in jail. We went with many newspapers and press, local and international agencies.”[1] Just thirteen days after their arrival on February 29, 2004, Haiti’s popularly elected Lavalas government was overthrown and its President Jean-Bertrand Aristide after being sent on a plane to Africa, declared he had been kidnapped by U.S. Marines. An interim government made up of elites drawn from the political opposition to the Aristide government was quickly put into place, supported by the United States, France, and Canada.

“Following the coup, more than 12,000 public sector employees, who had been hired under the Aristide government, were immediately fired without compensation”, writes Isabel Macdonald, a Canadian journalist conducting interviews with laid off workers in Haiti.[2] The Associated Press on May 12, 2004 reported that Telecommunications D’Haiti (TELECO), the 90% government owned public telephone company, had announced plans to lay off 2,000 workers, half of its workforce.

In May of 2004 an investigative report from a labor-religious delegation sent to Haiti, initiated by the San Francisco Labor Council, spoke of a witch-hunt against supporters of the former government and of receiving reports from the “FTPH (Federation of Public Transport Workers of Haiti), of criminal attacks on over 100 of the buses that they had purchased for use in the bus cooperative operated by the union.”[3] Sasha Kramer, a PhD student from California traveling in Haiti took photos of the demolished public buses. With death threats and arbitrary placements on police “wanted” lists, public sector employees and trade unionists, such as teachers, port workers, and bus drivers across Haiti were targeted. With an untold number of dead victims and political prisoners from the coup and the consequent twenty-six months of an unelected interim government, numerous human rights organizations decried state sponsored violence and persecution (March 2004- May 2006).

During the weeks prior to the 2004 coup a “general strike” was called by businesses and organizations associated with the opposition to the government, in which banks, gas stations, supermarkets, and specialty shops kept their doors closed, while the marketplaces of the poor remained open.[4] In a recent interview Duclos Benissoit, a founder of the Haiti Transportation Federation currently living in exile in New York, discussed his experience during the 2004 coup. “The people who stick their necks out, vocal resisters were targeted first. I was one of those people. I was opposed to any kind of “strike” called by the bosses. Unless called by labor, I told consumers to ignore the other ‘strikes.’ (Big business and national forces) didn't like this.”[5]

The ICFTU delegation in February 2004, just prior to Aristide’s ouster, as Katia Gil explains, “visited many people but only those involved with the opposition to the government of course.” The International Confederation of Free Trade Unions (ICFTU), claiming a membership of 157 million workers in 148 countries and territories, plays a leading role in investigating and drawing attention to labor abuse around the globe; but for the two years following the coup d’etat, the ICFTU did not make a single public statement or condemnation in regards to the massive labor persecution. The Organización Regional Interamericana de Trabajadores (ORIT) as the Latin American regional affiliate of the ICFTU , currently headquartered in Brazil, also remained silent...