In a gathering of around 100 leaders from labor, peasant, urban poor, women and youth groups, the umbrella coalition Laban ng Masa is bracing for bigger fights in its bid to oust the Arroyo regime and initiate reforms under a transitional revolutionary government. 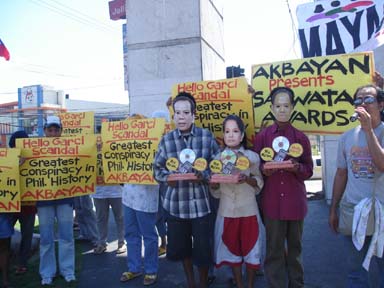 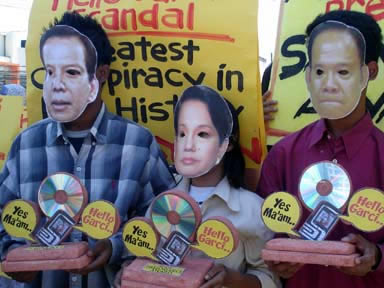 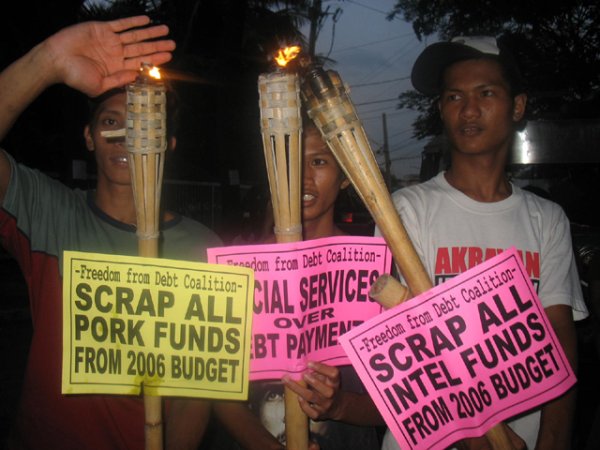 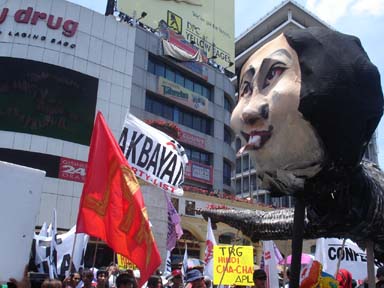 By calling on all its affiliate members to coalesce and form municipal chapters nationwide, Laban ng Masa vows to consolidate its ranks and build its capacity to mobilize tens of thousand people in the streets in an increasing number and sustained manner.

“The Arroyo regime has been corrupting local government units to deceive people into accepting charter change either through a plebiscite or people’s initiative. At the same time it goes on a rampage of extra-judicial killings and abduction to paralyze the political infrastructure of progressive groups. While all these are happening, Filipinos in the meantime face the daily grind of increased economic difficulties arising from unabated oil price hikes and diminishing incomes,” said Laban ng Masa.

“We need to equally prepare our ranks to frustrate the Arroyo regime’s maneuvers to perpetuate its illegitimate rule and aggravate the people’s economic woes,” it added.

Hinged on what it sees as the three main issues of the day, a three-pronged campaign was launched today by Laban ng Masa that revolves around three calls:

Economic relief now! This involves a package of economic relief measures to ease the burden of spiraling oil prices by calling on the suspension of RVAT on oil and power rates, increasing workers’ wages and instituting unemployment insurance for the jobless, among others.

Stop extra-judicial killings! An international fact-finding mission organized by UNORKA will commence this June and initiate the filing of cases with the UN Commission on Human Rights.

No to Cha Cha! In unity with anti-Arroyo legislators and opposition parties, this aims to frustrate the efforts of the Arroyo regime to change the charter and consolidate its illegitimate rule, whether through PIG, con ass or plebiscite.

Laban ng Masa will kick off its campaign on June 12, Philippine Independence Day, by mobilizing thousands of its supporters to join ranks with Catholic bishops in a protest rally against charter change. The group will march from the Balintawak interchange to the Bonifacio Monument in Caloocan where they will hold a program led by Bishop Deogracias Yniguez of Caloocan and Bishop Antonio Tobias of Novaliches.

A year after Press Sec. Ignacio Bunye announced to the public the existence of the 'Hello Garci' tapes, the truth behind the controversial taped conversations remains unknown, no thanks to Malacañang's incessant efforts to block the truth from coming out. The formal attempts to investigate the tapes failed not because neither GMA nor Garcillano is guilty, but because the administration blocked the truth from coming out, according to the group.

"However, the truth will haunt President GMA, ex-COMELEC official Virgilio Garcillano, and all those involved in this scandal. It will never be buried – not by Cha-cha, not by the so-called good economic numbers, and definitely not by the extrajudicial killings," Rep. Hontiveros said. "The truth will still haunt GMA even when it is finally out."

According to Rep. Hontiveros, "the whole charade to bar the truth from coming out, from Sec. Bunye's ridiculous confusion on the authenticity of the tapes and President GMA's 'I am sorry' speech to Garcillano's perjurious acts, became the most important confirmation that the veracity of the tapes' content is unquestionable."

"GMA and company may be trying to pull off one of the greatest conspiracies in our political history, but they will fail," Rep. Hontiveros said. "They must be aware by now that, in spite of their aggressive push for the country to move on, the nation is not yielding to their demands. Their tricks can fool the willing, especially those from the administration camp, but the people know that when Gloria said 'Hello Garci', Garcillano, like a dog on a leash, did her bidding."

In a picket to commemorate the controversy's first year, AKBAYAN gave mock awards to the scandal's "Gang of 3". President GMA was given the 'Hello Garci' Award, Sec. Bunye the 'Ay Mali Award', and ex-COMELEC official Garcillano the 'Yes Ma'am Award'.

The group said that the fact that the people are not buying the moves to amend the constitution proves that the government's diversionary strategy is not working. "No parliament in July and a mid-term election in 2007 mean that there will be an impeachment trial in the Senate before the year ends," Rep. Hontiveros said.