This is a 630 word piece about the rally for justice outside Scotland Yard on Sunday 11th June. 10 photos are attached. 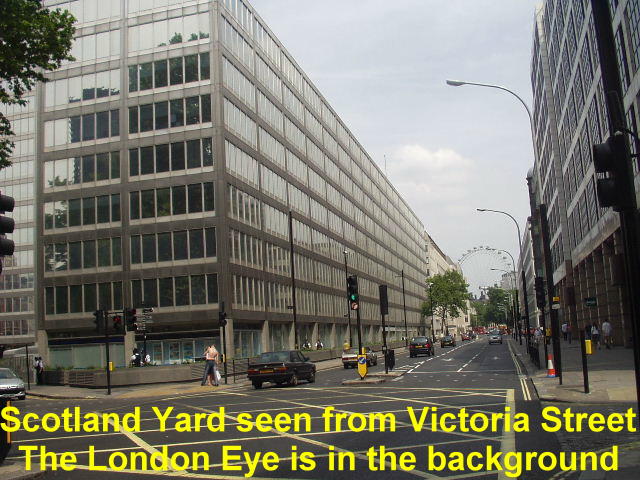 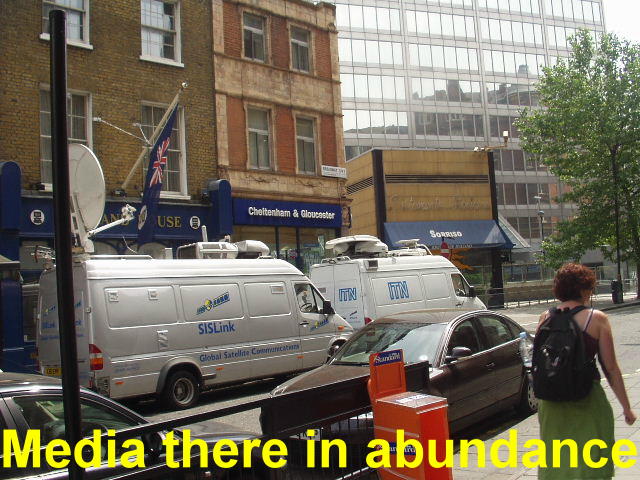 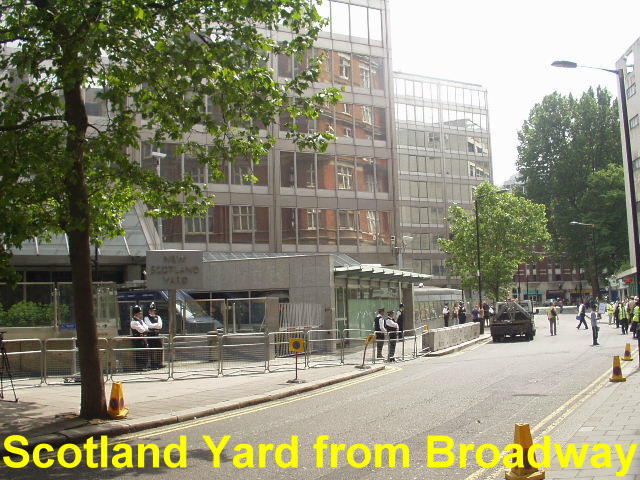 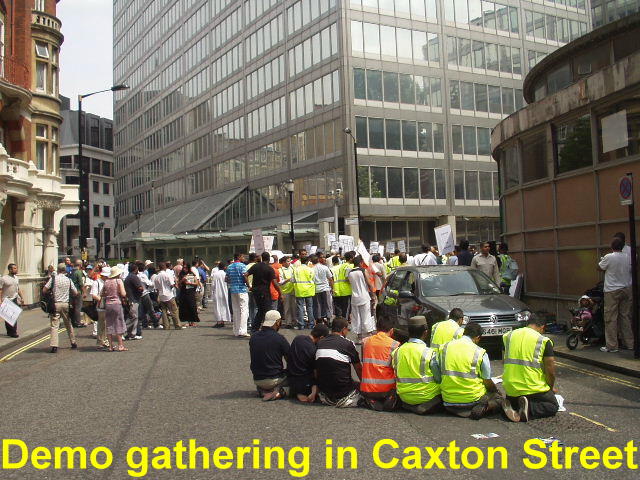 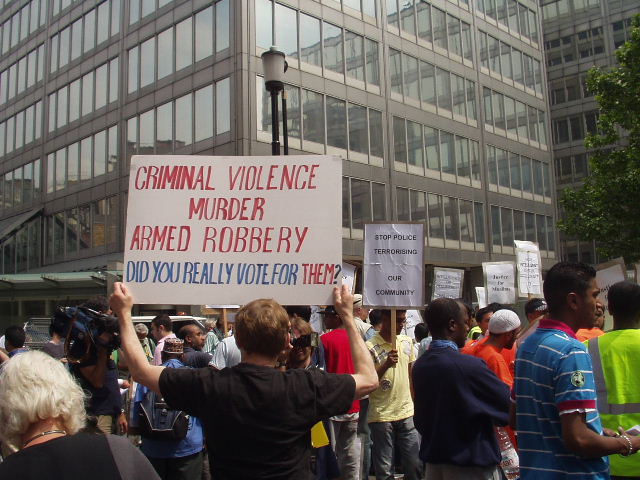 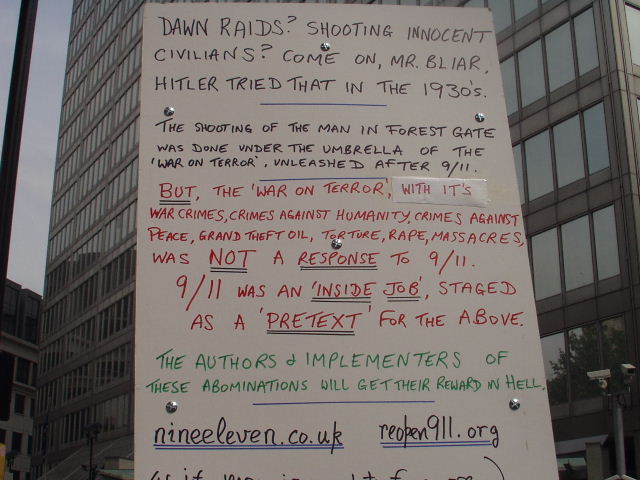 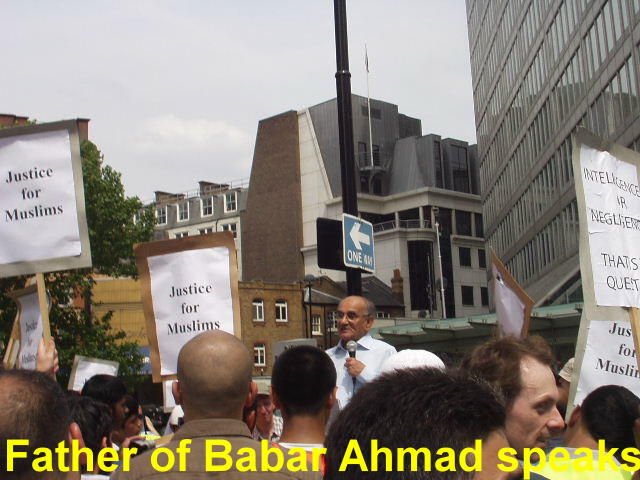 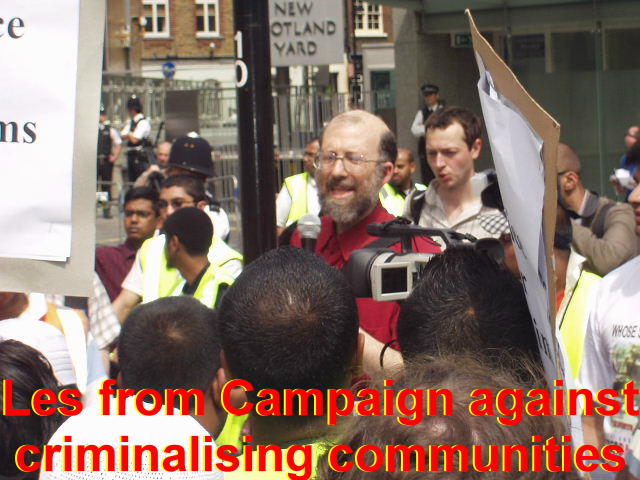 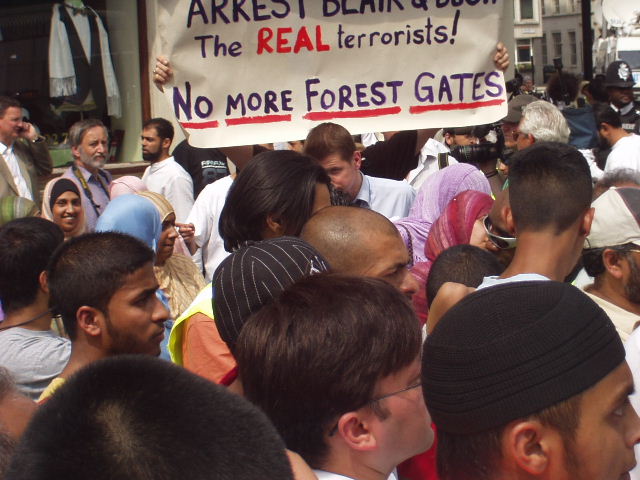 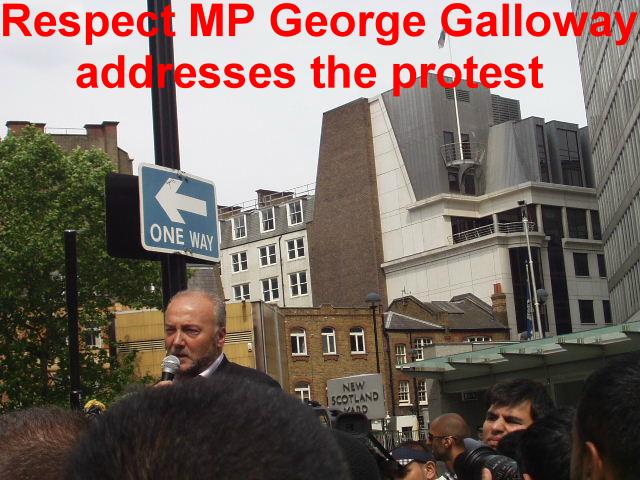 
Sunday 11th June saw a large and noisy protest outside the headquarters of the London Metropolitan Police Force, Scotland Yard. The demonstration of about 500 took place outside the 20-storey office block along Broadway and Victoria Street in Westminster. The yard is about 500 yards away from the Houses of Parliament. The rally was in response to heavy handed police tactics in a raid on a house in Forest Gate, East London on Friday June 2nd. The mainly Muslim neighbourhood was invaded by over 200 police, many of them wearing chemical protection suits and accompanied by MI5 agents.

The raid, which occurred at 4.00am on Friday 2nd June led to the shooting of 23 year-old Mohammed Abdul Kahar. He and his brother Abul Koyair were in police custody for a week after being detained in the dawn raid but were eventually released without charge. They were arrested amid great fanfare with tabloid headlines screaming `HUNT FOR THE POISON BOMB` (Daily Mail) and `POLICE HUNT FOR LETHAL CHEMICAL SUICIDE VEST` (The Times). Even the so-called liberal Guardian read `FEARS OF CHEMICAL OR BIOLOGICAL ATTACK TRIGGERED TERROR RAID`. Their release, however, was much more low key and coincided with England’s first game in the World Cup.


The demonstration was due to start at 2.00pm but due to several speakers being held up it commenced at 2.30pm. The protest started with a recitation from the Koran and the first speaker was the father of Babar Ahmad. He was followed by a speaker from the Muslim Association of Britain (MAB) who called for an Independent Public Enquiry. A representative from CAMPACC (Campaign against criminalising communities) said that the so-called plots like the ricin plot were pure invention and asked to see the evidence. He said we should oppose all anti-terror laws. A statement was read out on behalf of the family involved who said the two young men were still recovering from their ordeal and that Inshallah the protest would stop another family going through what they had suffered. Respect MP George Galloway commented acerbically that we should co-operate with the police and he gave an example. He knew of a cabal of dangerous men who were plotting to blow up Afghanistan, Iraq and maybe Iran and they were called the government. He suggested a raid on 10 Downing Street and went on to say there could be no peace until the two Blairs were gone, meaning Tony Blair and Metropolitan Police Commissioner Sir Ian Blair. He will on Monday table a motion in the House of Commons expressing no confidence in Ian Blair and called for his immediate resignation. He shouted that we should, “Speak the truth to power!”

During the protest there were many chants of `What do we want? Justice! ` and `When do we want it? Now! `

A statement from the MAB welcomed the release of the two men and Lindsey German of Stop the War said that the STW would stand `shoulder to shoulder` with the Muslim community. The demonstration finished around 3.45pm.

The event did receive a reasonable amount of TV coverage with substantial items on the BBC1 and ITV early evening news, `London Tonight`; it was also on Sky news, CEEFAX and the online news services.

10 photos of the day are attached.