New website offers protesters the chance to protest together, separately, in one place, from everywhere... 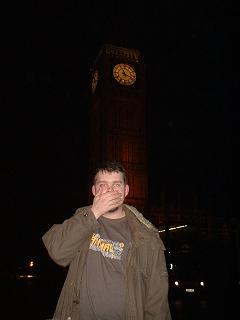 Silent Protest is a new website aimed specifically at the SOCPA legislation banning protesters from demonstrating in a loosely-defined area around Parliament Square, London.

"I got the ball rolling on this once I thought that I had a way to answer the question posed by the SOCPA legislation: How do you protest about the removal of your right to do just that?" says site founder Irving Washington.

The concept is relatively simple.Would-be 'virtual protesters' simply upload photos to the site, showing them within the SOCPA-defined area, in the 'Silent Protest' pose:

"In what may possibly be seen as a daft move, we're encouraging people to stage a virtual, goverment-un-sanctioned protest. All you need to do is get a picture of yourself, or your friends, within the protest free zone. Assume the pose (hand over mouth), aim and click."

And for those who feel strongly but cant get to London, there's still hope, according to Irving:

"While it is essentially about giving people a chance to be seen protesting in Parliament Square without the likelihood of arrest, if people from other parts of the country want to send photos to show support, then we're certainly not going to turn them away. We suggest that people get photos of themselves outside local landmarks, be they police stations, county courts, or council buildings. All they need to do is strike that pose. One of the first emails I had was from a lovely person in Liverpool who suggested getting a picture of the Houses of Parliament made up to photograph people next to, which was a fantastic idea."

So how likely is this to succeed? Campaigns such as the anti-ID card NO2ID have done very well to date, but they require much less interaction from supporters at the base level. Irving:

"We felt that, yes, there is the risk that everyone will see the site and say 'Ha, nice idea', and that be the end of it, because it takes a significant amount more effort to go into London, take pictures, and then upload them than it does to follow a link to an online petition. However, we think that the risk is worth it. The very fact that someone has to make the effort to get the picture taken means that each picture carries a lot more weight than something that can be done more easily, such as clicking a link or filling in a form."

So the success of the site's campaign lies with the action, or inaction of the people who hear about it?

"Absolutely. It's up to me to get the site seen by as many people as possible now, and hopefully people will start sending pictures. If they don't, well then the site will just have to stay with the three that have been there since the start... that's the risk we're taking, I guess."

The site aims to protect submitters privacy as much as possible. The submission guidelines include links to Tor, the EFF's web-browsing anonymiser, and to articles about removing identifying metadata from digital images.

"The less information we have about the submitters, the easier it will be for me to say 'That's all we have, sorry'. We don't ask for email addresses, or registrations. We advise people to use anonymising tools like Tor to prevent their IP from being associated with any uploads, and we also suggest removing metadata. As far as possible, we'll try and remove the metadata ourselves, but if people want to be sure they should do it themselves."

So it seems that Silent Protest may be asking too much of people: They have to get into London (or to a local landmark), get the photos done, remove the metadata, and then anonymously upload the pictures. A fair deal more effort than signing an online petition. While the weight of such a contribution is inarguably greater than a digital signature, is it even likely SP will receive a non-embarrasing amount of submissions?

"There's always the danger that we won't get a single photo. I realised from the start that this campaign is asking more than the usual from people. And yes, it's entirely likely that nobody will be bothered. However, I know that there are a lot of people who feel strongly about the SOCPA legislation, at least as strongly as I do. And if I could take the time to set up the site, then hopefully these people will be able to take the time to get the pictures done and sent in. Time will tell, I suppose. We launched in June, so if I don't have any photos by July, I guess I'll start feeling despondent then."

"I'll just have to publicise it harder, won't I?"

And somehow, you get the feeling that he will...

The site can be reached at: