One example of this vastly unequal division of water resources is my West Bank village of Qira. Every summer the Israeli company that supplies water to our village and that provides about 53 percent of the total Palestinian domestic water supply deliberately cuts off our water, thus generating a crisis. Last year Qira, a village of 1,000 residents, had no water for more than three continuous weeks, despite the summer heat. 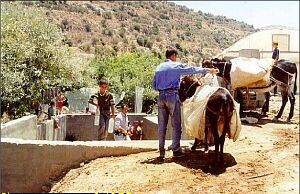 Deliberately cuts off our water

During Israeli Prime Minister Ehud Olmert's recent visit to Washington, President Bush declared Olmert's "convergence" plan "bold." For Palestinians, however, it is disastrous, because it will annex much of the West Bank's water and fertile land to Israel.

Under Olmert's plan, Israel aims to keep the two main Palestinian West Bank aquifers: the lower Jordan River basin in the east, and the eastern mountain aquifer, trapped behind Israel's wall in the west. This will force Palestinians to depend on Israel for water, preserving the status quo, a dramatically unjust division of water resources.

One example of this vastly unequal division of water resources is my West Bank village of Qira. Every summer the Israeli company that supplies water to our village and that provides about 53 percent of the total Palestinian domestic water supply deliberately cuts off our water, thus generating a crisis. Last year Qira, a village of 1,000 residents, had no water for more than three continuous weeks, despite the summer heat.

Water reductions and total cuts force villagers to find alternative water sources. We collect rainwater in cisterns during the winter, but by the start of the summer, the cisterns, unfortunately, run dry. Palestinian communities are thus obliged to purchase additional water from expensive and unsanitary tankers. A high proportion of children in Qira suffer from kidney problems thought to be related to drinking stagnant water. My 4-year-old daughter was forced to have a kidney transplant.

Across the main road from Qira, deep inside the West Bank, is the Israeli settlement of Ariel, where water is supplied to irrigate gardens, wash cars and fill swimming pools. The water in Ariel and other Israeli settlements is never cut off. Ironically, we feel lucky because we look out onto beautiful settlement houses with green yards, while Israeli settlers view the gloomy scene of our poor, parched community.

The Oslo II agreement, signed in September 1995, stipulated "the equitable utilization of joint water resources for implementation in and beyond the interim period." But in reality, this never happened. Instead, according to B'Tselem, a Joint Water Committee (JWC) was established to approve every "new water and sewage project in the West Bank. The JWC is made up of an equal number of representatives of Israel and the Palestinian Authority. All its decisions are made by consensus, and no mechanism is established to settle disputes where a consensus cannot be attained. This method of decision-making means that Israel is able to veto any request by the Palestinian representatives to drill a new well to obtain the additions stipulated in the agreement."

Additionally, if a well approved by the JWC is situated in Palestinian Area C, which is under Israel's complete control according to Oslo, the Israeli Civil Administration must also approve the project and issue a permit to drill a well. This entails a lengthy, complicated bureaucratic process, and the vast majority of applications submitted are denied.

The Israeli assumption is that Palestinians have only minimal water needs--less than the WHO's minimum quantities, and a fraction of Israeli needs. However, Palestinians, like Israelis, need sufficient water to drink and bathe, to develop industry and agriculture, and to build a modern country. Until that happens, my fellow villagers will remain with their eyes fixed on the water-tower gauge.

Israel's planned annexation of West Bank aquifers will perpetuate high Israeli water-consumption levels while denying basic Palestinian needs, and will dim any hope for a viable Palestinian state and for peace.