A small number of activists staged a protest outside the County Court this morning demanding charges against 13 Melbourne men be dropped... 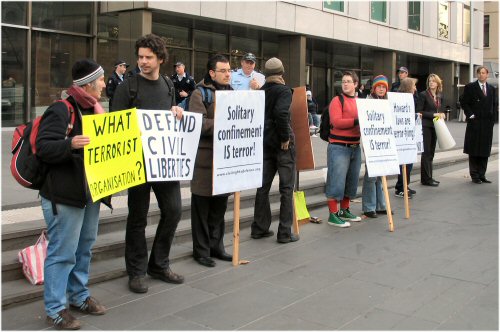 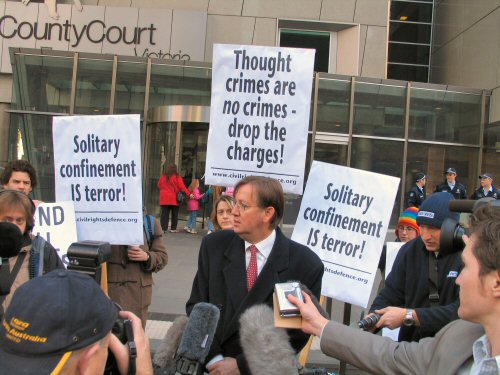 Taking photos in the court precincts is forbidden?

AUSTRALIA: MELB: As already mentioned on this site (

http://melbourne.indymedia.org/news/2006/06/114643.php) 13 Melbourne accused of terror offences are being held on remand in Guantanamo-style conditions at Barwon Prison, in spite of the fact they have not yet been charged, let alone been found guilty of planning or carrying out any terrorist act. A small number of activists from Civil Rights Defence (

http://www.civilrightsdefence.org) staged a protest this morning outside the County Court, to coincide with a committal hearing for the men. Michael Pearce from Liberty Victoria said a few words to the assembled media - unfortunately inaudible from where I was standing due to traffic noise. As if to underline the message of some of the placards, a police officer took the name of one of the activists - for taking photos of the lineup. Apparently it was OK if you worked for Murdoch or whatever, but otherwise ...