alex tsiorulin, the 'other' long-term lone demonstrator in parliament square, is often ignored and forgotten by mainstream media. even here, he gets little mention. yesterday he was met at court by immigration officers and removed to colnbrook. his display at the square was cleared yesterday afternoon by police. 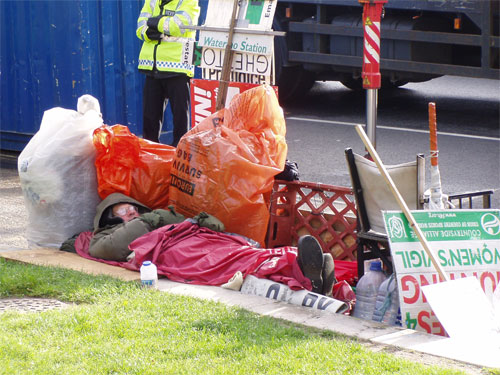 alex resting on the morning after police raid the square 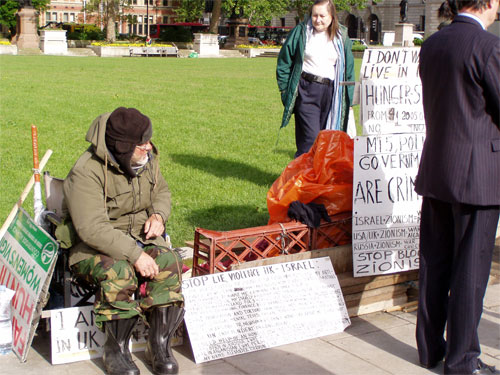 alex's remaining placards after socpa raid on 23rd may

alex has been at the corner of parliament square, next to brian haw's display, for several years, like brian, sleeping and living in the square, he has kept a one-man vigil. his protest is anti-zionist. he himself is a russian (his native language), who while living in israel, was persecuted by the israeli authorities for his views. facing a three year prison sentence there for incitement, he sought political asylum here. his case went through a long and protracted process. with the language barrier and his deep suspicion of the legal process, his case was not defended aggressively, and in march 2004, the appeals process ran out and he was deemed an illegal here.

more than two years have gone by since that decision, and the authorities have clearly been aware that he has been living in parliament square. he came under the same legal position as brian haw in that the socpa legislation post-dated his continuous demo, and so could not apply to him until the recent high court decision to allow the government appeal.

in the night-time raid on brian haw's placard site, when 78 police were paid to destroy and remove most of brian's display without warning in the middle of the night, alex's own display was partially removed too. on the day brian was in court facing charges over failing to comply with socpa conditions, alex was in court too. but while brian's case was adjourned on unconditional bail until the 15th july, alex's was given until yesterday, the day that the israeli prime minister swept into parliament accompanied by police, a helicopter, and israeli soldiers. as alex came out of the court room, he was surrounded by immigration officers, who arrested him and took him to charing cross station. at 2pm, police vans turned up at the square and his entire remaining display was cleared away.

supporters at the square were told by police that alex had agreed to be deported to israel and was happy with the decision. knowing this sounded unlikely, they went to charing cross police station, and after frantic phone calls to 14 lawyers, they eventually managed to get an immigration lawyer from freeman's to act for him and through an interpreter on a phone link they discovered that he was terrified of being returned to israel as he would likely face political imprisonment there. the charing cross police had clearly lied - when challenged on this, they said they were only repeating what they had 'been told'.

the authorities were planning to put him on a plane last night, but the new lawyer has managed to postpone that while he reviews the case. the difficulty is that officially all courses of appeal have been exhausted, but previous bad handling of his case and the fact that he faces committal in israel may mean there is a human rights issue to be resolved before he can be removed. he was taken to the the dreaded 'colnbrook' immigration detention centre last night.