//RESIST THE EVICTION OF THE SQUARE! Fri.23rd.June

THE SQUARE O.S.C. will resist its eviction - announcement

We have decided to resist the eviction of THE SQUARE scheduled for Friday June 23rd 2006. We are preparing a political statement and call for solidarity to the social centres around the UK, autonomous collectives and radicals to converge on the weekend of the 23rd-24th-25th June in Russell Square. We plan a social resistance to any attempts to evict us composed of all the elements which constitute THE SQUARE - including students, teachers & migrants which have utilised and contributed to this radical public space.

We plan to stay until we want to leave 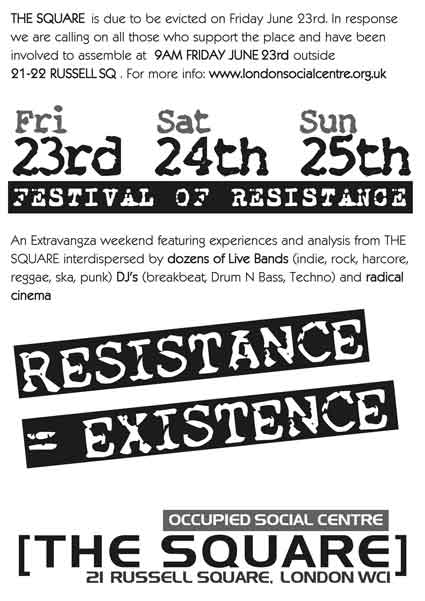 CALL OUT RESIST THE EVICTION OF THE SQUARE O.C.S.

>>RESIST THE EVICTION OF THE SQUARE O.C.S.

The Square Social Centre is due to be evicted next Friday 23rd June. We
have decided to put out a call to resist the eviction. We are hoping that
as many groups and individuals as possible who have used the Square for
events, meetings, campaigns, film showings, benefits etc will show their
support.

We are calling for people to assemble outside THE SQUARE at 9am (or
earliar!) on Friday 23rd June. There will also be a meeting this monday
at 7pm to plan and organise how we will resist.

To celebrate our achievements and time at THE SQUARE, We are planning a
weekend festival of events from Saturday 24th - Sunday 25th June. The
FESTIVAL OF RESISTANcE will be a showcase of the many social struggles &
political campaigns in London that have participated in and been supported
by The Square. There will be an open mic for experiences and analysis
aswell as dozens of live bands, DJ's, food, drinks, discussions and
cinema.

>>HOW YOU CAN SUPPORT US

We want as many people as possible to arrive at 9am (or earliar!) and
assemble outside 21 & 22 Russell Square. Bring your friends, banners,
passion!

If you or your group or band have participated, used, supported THE SQUARE
over the last months then please email us to have your group name added to
the list of supporters.

If you are an academic or involved in a student society or study at
university please email us so we can add your name (with your
department/uni) to the list of supporters from the university.

If you would like to get involved, or your group would like to support the
Festival of Resistance, please come along on 7pm Monday 19th June meeting
or email:

We have also produced a number of flyers and posters and would welcome any
help in giving them out/putting them up around the uni. There are some
down at THE SQUARE and it can also be downloaded from Indymedia:

THE SQUARE has been an attempt to construct a radical common space, where
ideas and alternatives to the present rule of commercial interests and
authoritarianism can be developed. Over the past 6 months we have created
a network consisting of many who feel and share the need for social
change. We hoped that during our time at THE SQUARE we have made this more
possible and have laid the ground for new initiatives of
self-organisation, co-operation and commuincation. For some of us THE
SQUARE has been a step forward from previous social centres (Grand Banks -
Tufnel Park, Institute For Autonomy - Gower Street), the relationships
formed have been solidified and consolidated, we have made connections
with many groups and people we thought we never could, we have become
constituent network, a diverse community within a common space. Lets make
this weekend a springboard for future activity. 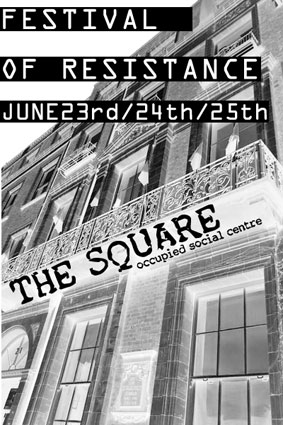 
The forces of reaction are mobilising.?
Under cover of The World Cup?