There was an article on Guardian unlimited by someone called leader, on the police raid and shooting of a young Muslim, which, now appearing to have been based on flimsy intelligence is yet another diesel soaked rag to the anti-western fire burning throughout the Islamic world. The article titled Intelligence needed, which can be read here prompted me to share my views on the matter. 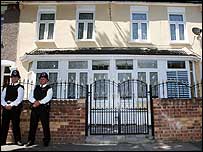 Leader says in his article that we learned a lot from the 9/11 commission, I suspect the people that count haven’t learned very much, and what they have learned is too little too late.

I was listening to a law lord’s debate on the new terror laws. One of the lords stated one of the police cases for the necessity of the new laws: a case involving around twelve terror suspects, all requesting legal representation by name from the same firm. As the firm didn’t have sufficient staff to allow many of the suspects to be interviewed simultaneously, the police cited this as significantly delaying what would already be a lengthy interviewing process, signaling the need for longer detention without charge. However, as more and more of us are realising that the war on terror has largely been a buzz word/scare tactic to capitalize on the public’s irrational fear of this particular brand of Islamic extremist terrorism, to initiate U.S plans for future oil-supply security. I suspect the Metroplitan police leadership are jumping on the Bush/Blair bandwagon in an attempt to use the same fears to secure new laws, like longer detention without charge, which they have wanted for years.

There is significant evidence to say that the U.S had planned for “regime change” in Afghanistan and Iraq long before 9/11, and with Bush and Blair’s case for war now clearly known to have been a pack of lies it is hard to believe Bush didn’t have a predisposed ambition to take over oil-rich Iraq. It is just unfortunate for us that Blair chose to be an unquestioning Bushite. These two wars both unnecessary and useless in fighting global terrorism, because they have turned into massive new causes of outrage in the Islamic world, making recruiting, which was already relatively easy for the terror networks, even easier, they also put Britain up to second on the Islamic extremists hit list of destinations for attacks. When Britain was attacked, it became an opportunity for the government to push through these ridiculous infringements of human rights of the terror act 2006, which, in defence of Blair are, I believe a genuine attempt to make our country safer from terrorism, in his warped idea of fighting terrorism, learned from oil-biased Bush. As I said I suspect the police have wanted to detain people for longer without charge for many years now, the public’s hysteria of terrorism caused by 7/7 has proved to be perhaps the only way they could justify it to the public. The saddest thing about it is whereas you can understand (not condone) the Police’s motives, Blair’s motives for whole-heartedly supporting the case are less understandable.

Blair is perhaps one of the only informed person in Britain or the world that still believes their (his and Bush’s) handling of the rise of Islamic extremist terrorism has been on the right tracks. The scare tactics Bush and co, namely Cheney and Rumsfeld used after 9/11 to create enough hysteria to justify the two invasions, have unfortunately obviously had an effect on Tony Blair. You can hear it in the way he speaks about the “terrorists” in the same way Bush does, but Bush knows his intentions are to scare; Blair actually believes everything he says. In reality, the war on terror so far has been so badly wrong that it has served to increase the problem and accelerate the rise of Islamic extremism around the world. So these laws, and the two shootings the first of which was a massive blunder and the latest has proved to have been based on flimsy intelligence, coinciding with the atrocities inflicted by the marines at Haditha is sure to have added further to the anti-American fire burning throughout the Islamic world. One in four Muslim’s are already sympathetic to the terrorist’s aims and methods, and increasingly even the most liberal Muslim’s are becoming outraged by the continual western abuses of power.

You can read all about the main causes of Anti-American feeling in the Islamic world since 1979 in Islamic Jihad Terrorism: Americas Frankenstein.