Hundreds of thousands marched yesterday (16 June) in the Mexican state of Oaxaca, in protest against the brutal police attack on striking teachers last Wednesday. They were joined by people from San Salvador Atenco, the town brutalised by paramilitary police last month. 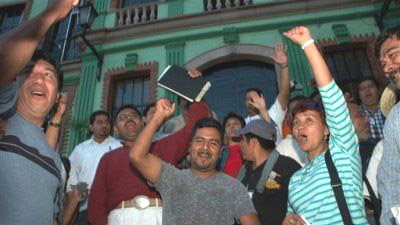 Hundreds of thousands marched into Oaxaca, Friday 16 June, to support striking teachers whose encampment was brutally attacked by police on Wednesday. The march went to the Zocalo (central square), already retaken by the demonstrators on Thursday.
Led by section 22 of the SNTE teachers union, the march was supported by students from the university of Oaxaca, local health and university workers and numerous other union, popular and left wing organisations -including a contingent from the Frente en Defensa de la Tierra in San Salvador Atenco and other supporters of the EZLN's 'Other Campaign'. The principal demand of the demonstrators was the resignation of state governor Ulises Ruiz Ortíz of the right-wing Institutional Revolutionary (sic) Party, widely accused of corruption.
Organisers put the numbers marching at 300,000, the police said 70,000 and the governor's office said 15,000.
Last Wednesday's attack on the Oaxaca is the latest in a series of brutal actions by paramilitary police against striking copper miners, residents of Atenco and communities in Isla Mujeres that are trying to prevent their island becoming a rubbish dump for the trash from Cancun. Two were killed in Atenco and two copper miners also died.
These actions, directly organised by the national intelligence committee chaired by President Vicente Fox, are widely seen as trying to create a 'strategy of tension' - a climate of fear aimed at discrediting the EZLN's 'Other campaign' and ensuring a right-wing victory in the July 2 presidential election.
After negotiations the state government released 10 teachers arrested on Wednesday and suspended the arrest orders on 25 leading union activists. Negotiations on the teachers pay and other demands are continuing. Earlier reports of deaths among the teachers on Wednesday have not been confirmed.

A photo of Friday's march can be found at

To watch the amazing video 'Atenco - Breaking the Siege' visit