Over 120 people detained at Campsfield removal centre near Oxford have gone on hunger strike in protest at their indefinite detention (without trial) and the conditions they face.

"...Most of us have been here for a long while now. There are people who have been detained for up to two years and down to three months. We are cramped in here like animals. We are treated like animals and moved around different detention centres like animals. The immigration service have taken husbands from their families and taken people who ran away from persecution in their various countries, and dumped everyone in here."
-letter from hunger strikers

The latest unrest follows the desperate actions of a Somalian man who went onto the roof and threatened to kill himself, and the takeover of Campsfield by GEO (the company formally known as Wackenhut) who are eager to cut costs at the expense of detainee and staff conditions. However, the detainees have made it clear this is not a specific protest against the new management but against detention in general.

On Thursday night a candlelit vigil by supporters encountered an enthusiastic and noisy response from detainees, and a group of inmates carried out a yard occupation until 5am Friday morning. Meanwhile GEO have been bribing detainees with vouchers to try and break the strike. 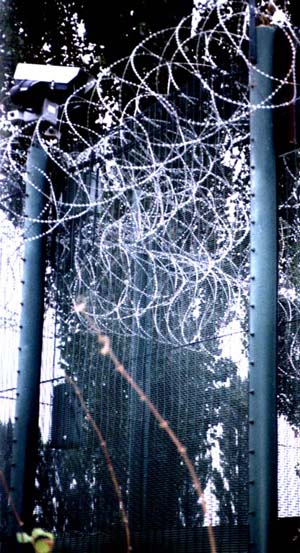 Razor wire at back of Campsfield immigration prison

"At the moment they think we will crack, but they will not break me. If they try and move me from here to another centre I am not going to go. I am going to fight them for as long as I can. If I have to commit a crime to get attention I will...I know definitely there are about 10 others who are prepared to go all the way. I have got to take this to the end, I would rather die here than get tortured to death back in my own country."
-detainee quoted in the Oxford Mail