At 1pm on Saturday 17 June 2006, Birmingham Guantanamo Campaign held a vigil on High Street in the city centre following reports of the deaths in Guantanamo of three prisoners - named on a placard as Yassar Al Zahrani, Mani Al Utaybi and Ali Abdullah Ahmed. 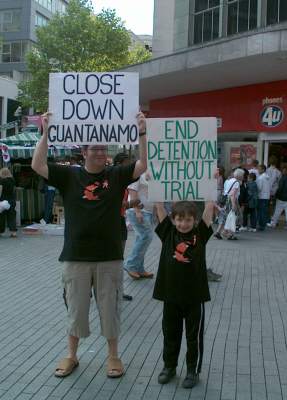 On Friday the 9th June, it was reported by the US military that 3 men had allegedly committed suicide in Camp 1 at the notorious Guantanamo Bay.

The US military and the government have been quick to label these deaths as, ‘suicides’ however former Guantanamo detainees including 9 British citizens claim that they are almost certainly accidental killings caused by excessive force used by US guards there.

There have been numerous reports and details from ex-detainees of allegations of abuse and torture at the hands of the US military and interrogators. Tarek Dergoul, who spent significant time with two of the deceased, provides the first in depth insight into their time in Guantanamo.

He describes both Manei al-Otaibi and Yasser al-Zahrani as having indefatigable spirits, never once discussing or contemplating suicide, and being the foremost in their lack of cooperation with their captors and long term committed hunger strikers; leading them to be punished by frequent reprisals and beatings by guards.

He states that it was camp policy to systematically beat incompliant prisoners therefore it is hardly surprisingly that such vicious attacks could result in death. He further notes that in Camp One, where he was also held, it would have been physically impossible for them to have committed suicide successfully.

Immediately after the deaths the US administration came out on the offensive describing the deaths as “an act of asymmetrical warfare” and a “PR stunt” by Al-Qaeda operatives being held at Guantanamo. This is possibly the most offensive and insensitive thing the military has said to date showing total disregard for the feelings of the families at this difficult time.

After four years of illegal detention and torture, no evidence has been presented to substantiate that any of the detainees had links with Al-Qaeda. Less than 10 of the 450+ men held there have been charged and none have been put on trial since the camp opened in 2002.

The US claim the men died by strangulation with their bed-sheets. However, a lawyer who has seen the conditions at the camp has stated that the mesh is far too thin to fit a sheet through.

“There is no way to commit suicide at Guantánamo. We were not only under constant surveillance; also there were no points in the cells where to hang anything, let alone a person. How could these men hang themselves?” said Mamdouh Habib, former Guantánamo Bay prisoner.

These men were illegally detained and tortured for over four years with limited access to the outside world. They had little, if any, communication with their families through censored letters and did not have access to legal representation.

The men died under suspicious circumstances and no independent organisation or body has been allowed into Guantanamo to investigate the circumstances surrounding the deaths. This leaves questions as to how the men died unanswered.

Following the deaths of these three men the families of 8 British residents still detained at Guantanamo are increasingly concerned for their loved ones. The news of these deaths was clearly disturbing for relatives of all the detainees and did nothing to assuage fears about their mental and physical health in Guantanamo. They too have had no direct access to their family members for over four years and two of the residents have never seen their youngest children.

Talal Al Zahrani the father of one of the deceased said, "I want Yassar to be the last person to die in Guantanamo."

One of the British residents still detained wrote: “It is the Brits who have the ability to stop the injustice that is going on here – to me and many others.”

• Sign a petition calling for Guantanamo to be shut down and an independent investigation into the deaths of these young men at:

• Please write to your MP and ask the British government to take action to close down Guantanamo and ask for an independent investigation into the deaths of these men.

• Please also send a copy of the letter (a draft can be found on our website) to the Home Secretary and the Foreign Secretary.

Details of the demonstration and draft letter can be found @: www.guantanamo.org.uk