a peaceful single male held a placard with two quotes outside downing street yesterday afternoon. police told him he would be arrested, and although he agreed to go peacefully they violently handcuffed him in front of a crowd of astonished tourists. 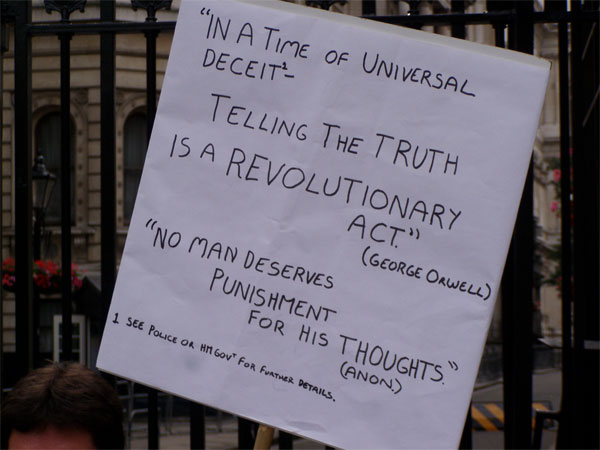 the incorrigible barbara tucker and her peaceful partner in crime 'steve' decided to go and stand outside downing street this afternoon. just before they set off from parliament square, diplomatic police laughed with them and said that they hoped they weren't going up whitehall. well they did. the diplomatic police attended briefly but didn't seem that bothered. even the armed police at the gate were enjoying a joke about the singing that accompanied the small gathering as barbara modelled her pink 'peace, justice, love for all' banner, and steve held the banner pictured above.

after a while though, two officers attended from charing cross. they declared that an illegal demonstration was taking place and that they were going to report barbara and steve for possible summons. this made barbara's 30th 'report', although she has only been summoned once. the police then tried to report 'steve' (his first) but as he did not believe he was committing any offence he only was willing to give his first name. police threatened to arrest him, and he co-operated fully stating again that he did not believe he had comitted an offence but would go to court.

despite his completely peaceful demeanour, the police insisted on handcuffing him. steve refused to make this easy for them, and resisted passively, pointing out that he was not resisting arrest, but was resisting the unnecessary use of handcuffs. by now, three policemen were using various painful holds on him attempting to cuff him, and officer cx149 was witnessed kneeing steve hard in the thigh.

after struggling for some minutes, and attracting a large crowd of mainly tourist passers-by, the police finally managed to cuff the powerful but unruffled man. steve kept his composure and his placid stance throughout. when they were trying to push him into the car, he calmy told them to let go of him and he would sit down himself. they finally got the idea, let their hold off him, and he quietly got into the back seat by himself with dignity intact.

by now, nearly fifty passers-by had gathered (mostly tourists), and steve's supporters were busy explaining to them about the repressive socpa law and its violent use they'd just witnessed.

later, a small group held a solidarity vigil outside charing cross station. they were told that he had been seen by a doctor and a nurse, and that he had assaulted a police officer - that old chestnut!

some food and drink was passed into the station, and latest news at time of posting is that steve is still refusing to give any details on the grounds that what he did was not a crime. so he has been held in custody for nine hours now, and has still not been officially charged. police are considering whether to take him to court in the morning, where it's possible but hopefully unlikely that he may face imprisonment until he co-operates by giving details.

given the fact that so many socpa 'reports' have not led to summonses, that the assault charge is laughably fictitious, that the violent arrest was witnessed by so many and videoed, and that imprisoning someone effectively for holding one banner up outside downing street might not go down too well with the mainstream press, it is clear the stakes are high.

it's easy to get things wrong at 3.30am - the linked film encoding above is very poor quality, so here is a much better quality version of the same film, although the file size is actually slightly smaller

if some clever imc-tech wants to relink the original above and delete this comment/addition, that would be sweet.

i intend to also post up a wmv and qt format soon so most folk will be able to view this film one way or another.

for widest possible coverage i've sold my soul and done a wmv conversion. please try and get vlc player anyway! from www.videolan.org - i haven't got shares! - it's free.

steve was kept at charing cross overnight. supporters have been trying to make sure he is ok. he appeared at bow street magistrates court this morning and the police are charging him with the socpa offence (unauthorised demonstration) and with supposedly assaulting a policeman. try watching the vid and then say how likely that was!

it seems they may now have his full name and he is expected to be bailed soon. will confirm and update this if and when it happens.

steve is out on bail with two charges

this morning, steve was transferred under serco custody to bow street magistrates where he appeared before a judge at about 1pm charged with organising an unauthorised demonstration, and with assaulting a police officer.

steve was represented by a duty solicitor who advised he give his details to the judge - otherwise it would be possible he would face contempt of court and be jailed for up to three months. having at least taken a pricipled stand against the police and serco, he finally relented and gave his name and address.

after another hour in the cells during which checks were made, he then returned to the dock, where the charges were officially put to him and he pleaded guilty on both counts.

there will be a pre-trial hearing on monday to set a court date for the trial, and in the meantime he has been released on unconditional bail.

physically, his left arm hurts from the excessively tight handcuffs, and his left thigh is also very painful, after the dead leg kneeing seen on film. he has other bruises but is in good spirits.

it is interesting that the police have not charged him with resisting arrest, even although this is what they were claiming he was doing when trying to handcuff him.

i'll report the court dates when we know them on monday. 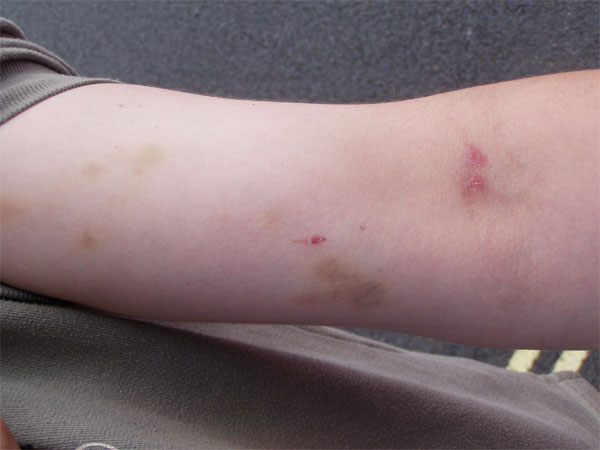 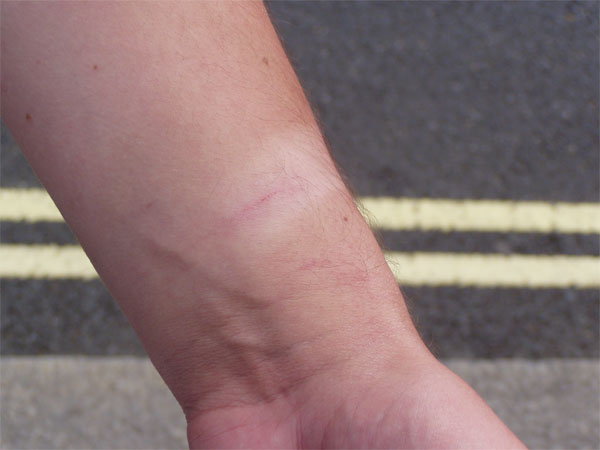 bear in mind that these pics were taken three days after the police assault!
as we were in a public place, steve didn't want to show off the lovely swollen purple bruise on his left thigh caused by officer cx149 right knee, but the unnecessary cuts and bruising on his upper left arm, and the cuts caused by the over-tightened and scraped handcuffs on his wrist are clear enough to show the brutality of what was going on.

and all for holding up a placard with two well-known quotes on it.

so be careful if you carry a newspaper with a 'government-critical' campaigning front page. don't hang around outside downing street holding it up for any length of time or you might get the goons jumping on you too.

steve back out on the campaign trail - unthwarted