videos made in bitola by video workshop participants

In Bitola/macedonia, video workshop started with a group of 20 enthusiastic people, and ended with 2 finished films. 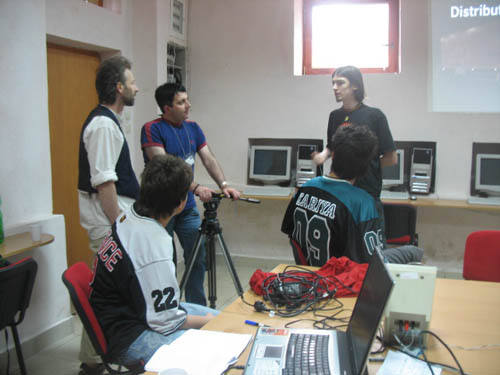 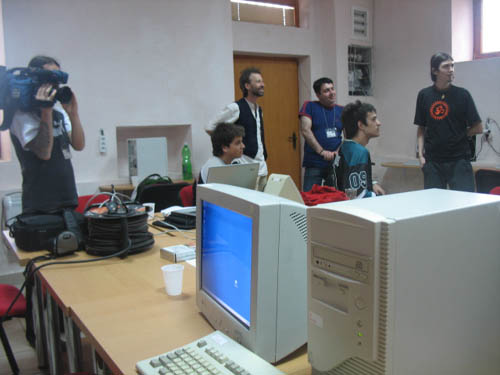 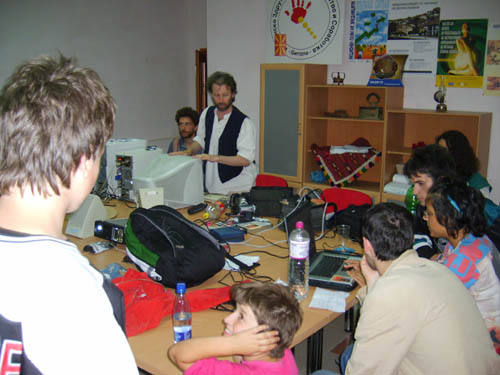 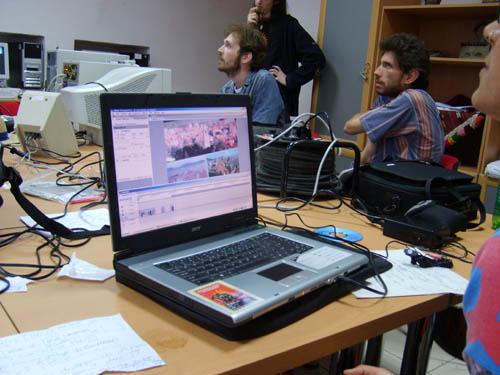 The video workshop started on tuesday 14th of June. There were 20 paricipants. We started the workshop with an intro; showing activist films around europe and talking about the plan of the workshop. there were quite a lot of participants from the linux group in Bitola called Lugola, together with individuals. Lugola people made a linux presentation in the first day and together we had a look in the video editing software Diva. Lugola people had a great motivation to make video editing in linux and were open to help out to the others with their problems in using the operating system. So this stop of the caravan included promotion of free software with the help of the locals. The first day passed by warming up of the participants with technical equipments, talking about the ideas about which local subject we can cover in the final films we will make. There were 11 topics, and 4 topics we had chosen in the end of the workshop were;
-the life in the cardboard houses in roma area(with still images/digital photo camera)
-pollution in bitola(with still images/digital photo camera)
-mainstream media versus alternative media in Bitola(video)
-the non-protesting cultura in Bitola(video)

The second day, Hamish and me, the two video trainers of the caravan, could not find the way to the local center and ended up in a school for little kids, and had a nice chat with the english teacher. the school teachers helped us to find our hosts phone number and our way back to our meeting point cafe lektira. the day was over, the participants were gone back home.
The third day, happened to be the second day for the workshop. Hamish went to the local center, I went to the cafe Lektira to find as many of the participants as we can from the first day. I and some other people from the first workshop day waited in cafe lektira for an hour for other participants to come and during this, Hamish and some participants who were waiting for the key of the youth center started another film by interviewing with little kids in the neighbourhood of the workshop place which ended up a finished film on what kids of bitola want and like.
We started the workshop with talking about the local issues we have chosen. Unfortunately there were 6 participants in total and we had to choose 2 topics out of 4 which are;
-pollution
-mainstream media vs alternative media

During the second workshop day we had 2 guests from the local television called Terra. Since we had the mainstream versus alternative media topic, we started to ask questions to the interviewer from the television before he asks any questions to us:)
In the second and third days we mostly did editing. For the media film, we had some footage captured from the local television news for the media film. We did interviews with people on what they think about media. also we edited the kids movie, made more interviews with kids.
In the end of the workshop, we had 2 finished films one about the neighbourhood kids called 'neighbourhood voices', one about pollution called 'Beautiful', and a rough edited film about mainstream media vs alternative media.
we had talks with participants on how to form indymedia in Bitola. They are eager, and for sure they are able to solve any problems but a bit shy to start of...Bitola, as the periphery of macedonia compared to Skopje, is suitable to be the center of indymedia macedonia with its technical possibilities. We are still in touch with the participants.