Australian government presses ahead with plans to dominate East Timor

Neither Horta nor his Australian backers want to test this “tremendous support” at elections due next year. “The problem is, obviously, can the country afford the next six months, the next nine months of this continued pressure on the prime minister to resign?” Horta asked. “Can we afford this increasing loss of credibility of the government and the poor image of the country? Or should the prime minister say, ‘Well, I step aside in the interests of my own party. It seems that I am a liability to my own party, if not the country’.” The threat of criminal charges is obviously designed to compel Alkatiri to make that decision. 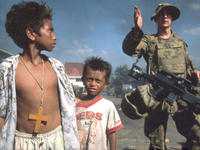 Compel Alkatiri to make that decision

Having established an army of occupation in East Timor, the Australian government is engaged in ongoing political warfare on several fronts to ensure its predominance over the half-island. In the United Nations, Australian diplomats are pressing to ensure that Canberra retains control over any new UN mission. As part of this offensive, the Australian media is conducting an unrelenting campaign against Prime Minister Mari Alkatiri, who is regarded as too close to rival Portugal and thus an obstacle to Australian interests.

Murdoch’s Australian has again outlined the agenda most openly. In a comment on Saturday, foreign affairs editor Greg Sheridan argued that while other countries needed to contribute to the reestablishment of a police force in East Timor, Canberra had to retain overall control. “The UN Security Council is considering East Timor and its future policing requirements right now. It is a vital task for Australian diplomacy to get the form of this right,” he stated.

Sheridan declared it was vital that “Australian do the job alone” in police training. “The UN in Timor has been a route to confusion and dysfunction. In particular it has been a route to Portuguese influence, a baneful business indeed.” Early this month, Sheridan branded Portugal as “Australia’s diplomatic enemy in East Timor” and identified Alkatiri as “the key to their influence”.

While the Howard government cannot afford to be so open, with the backing of Washington, it is involved in a diplomatic offensive to guarantee that Australia leads any UN operations in East Timor. The push is particularly cynical as the US and Australia have consistently opposed calls by the UN, East Timor and Portugal for an extended UN presence in the country. As recently as early May, Canberra and Washington vigorously opposed any extension of the UN mission.

Differences surfaced openly in the UN Security Council last week when Australian ambassador Robert Hill opposed a proposal by UN Secretary General Kofi Annan for a formal peace-keeping operation to take over from the present Australian-led military force. The Howard government’s plan, modelled on the Australian-led occupation of the Solomon Islands, is to retain exclusive military control, while at the same time presiding over a multi-national police force and installing Australian officials in key administrative posts. Hill argued for a foreigner to be put in charge of the East Timorese police force, privately suggesting former Australian Federal Police Commissioner Mick Palmer for the post.

Portugal and Malaysia, both of which have police contingents in East Timor, backed Annan’s call for the UN to take full control of the military and police presence. Portugal’s ambassador Joao Salgueiro told the Security Council: “Timor-Leste is a child of the United Nations. So it needs the universality and impartiality of the United Nations, which must once again take a leading role.”

A meeting of foreign ministers from the Community of Portuguese-Speaking Countries on Sunday decided to send a mission to East Timor to assess the situation. Portuguese Foreign Minister Diogo Freitas declared: “East Timor is not a failed state. We have to defend the necessity of sending a United Nations force in which all member nations participate actively.” Last week the European Commission, which has backed Portugal’s ambitions in East Timor, signed an agreement with the Alkatiri government to provide 18 million euros in aid with a focus on “institutional capacity building,” as well as poverty alleviation.

Yesterday US ambassador John Bolton stepped into the diplomatic arena to back Canberra’s bid for control. Opposing “a UN presence forever” in East Timor, he argued it was necessary “to support the Australians and New Zealanders who are there”. Of course, if the Solomon Island intervention is any guide, the Howard government intends to stay in East Timor not just for months, but years.

This diplomatic arm-wrestling reflects sharpening inter-imperialist antagonisms, not just over East Timor, but internationally. At stake is control over significant oil and gas reserves in the Timor Sea as well as East Timor’s strategic position in South East Asia, astride key naval routes. The Howard government exploited factional conflict in the East Timor’s government and security forces to begin dispatching 1,300 Australian troops to the island on May 24. The last concern of any of the competing powers is the plight of the poverty-stricken East Timorese, many of whom have fled to refugee camps.

The divisions in the UN are paralleled in the factional struggle in East Timor itself, where Australian allies—President Xanana Gusmao and Foreign Minister Jose Ramos Horta—are engaged in a barely veiled campaign to oust Alkatiri. Under the country’s constitution, the president does not have the power to sack the prime minister without a vote of no confidence in parliament, where Alkatiri’s Fretilin party has the overwhelming majority. As a result, the Australian media has been seeking to dredge up the basis for criminal charges against Alkatiri, which would force him to step aside.

The latest shot in the campaign was fired last night on the Australian Broadcasting Corporation’s “Four Corners” program. In a shameless piece of propaganda, ABC reporter Liz Jackson sought to demonstrate that Alkatiri, in league with former interior minister Rogerio Lobato, had supplied weapons to former Fretilin fighters to form a hit squad against his political opponents. Openly contemptuous of Alkatiri and his denial of any wrongdoing, Jackson presented, unchallenged, a patchwork of comments and documents, all fed to her by the prime minister’s political enemies and torn out of context.

It should be recalled that the alleged misdeeds took place amid incipient factional fighting, in which 600 rebel soldiers, joined by sections of the police force, were threatening to wage civil war if Alkatiri did not immediately step down. Even if completely true, all the “evidence” demonstrates is that Alkatiri and Lobato, like the rebels, were arming their supporters. The ABC program’s partisan approach verged on the farcical as Jackson pressed Alkatiri on the illegality on “arming civilians,” while ignoring the fact that those she painted as “the heroes of the anti-Alkatiri struggle” were, in strict legal terms, guilty of mutiny and treason.

In its efforts to present Horta as the popular prime minister in waiting, “Four Corners” perhaps revealed more than was intended. Horta has tried to present himself as above political infighting—the man to bring all the factions together. But the ABC’s coverage of his meeting with rebel leaders in Gleno, immediately prior to an opposition rally in Dili on June 6, showed Horta openly factionalising with anti-Alkatiri forces. Asked about this activity, Horta declared unabashed: “Everywhere I have been to—Baucau and everywhere—and I have had tremendous sympathy, support, warmth from the people by the thousands, by the hundreds. And I feel overwhelmed, maybe because they are desperately looking for leadership, looking for people they can trust.”

Neither Horta nor his Australian backers want to test this “tremendous support” at elections due next year. “The problem is, obviously, can the country afford the next six months, the next nine months of this continued pressure on the prime minister to resign?” Horta asked. “Can we afford this increasing loss of credibility of the government and the poor image of the country? Or should the prime minister say, ‘Well, I step aside in the interests of my own party. It seems that I am a liability to my own party, if not the country’.” The threat of criminal charges is obviously designed to compel Alkatiri to make that decision.

According to the Melbourne-based Age newspaper on Monday, President Gusmao is considering using his constitutional powers to launch a judicial inquiry into the allegations unearthed by the ABC and other Australian media. Horta was considering a visit to the alleged leader of the Fretilin hit squad, Vincente “Railos” do Concecao, to gather evidence and report back to Gusmao. “The president is not indifferent, quite the contrary. He is attentive to these allegations, and... he’s garnering whatever information is available, and he will take action in due course if he has to,” Horta explained.

These sordid political machinations highlight the absurdity of the so-called independence proclaimed in 2002 as a step forward for the East Timorese people. In the era of globalised production, the tiny half island was never going to be independent of the global and regional powers, or the institutions of international finance capital such as the World Bank and IMF. Far from enjoying peace and prosperity, East Timor has become another arena for imperialist rivalries, in which each local clique seeks to secure its political position by obtaining the backing of one or other of the competing powers. Far from ending conflict in East Timor, the Australian intervention is laying the basis for a future civil war as Canberra seeks to install its own clients.