"Remember the Dead, Justice for the Living" Vigil

On 20th June, 2006, the Birmingham Anti-Racist Campaign (ARC) staged a vigil in the grounds of St. Philip's Cathedral in Birmingham to "commemorate those asylum seekers who took their own lives while awaiting the Home Office's decision or incarcerated in detention centres, and to pledge our determination to campaign for justice for the living."

Using 34 hand-made "stone graves", which bore the details and stories of asylum seekers who have died recently, the vigil managed to eloquently tell of the shameful asylum system that sometimes drives its victims to such depth of despair that they take their own lives, many of them because they would rather be dead than be sent back to the countries they had fled. 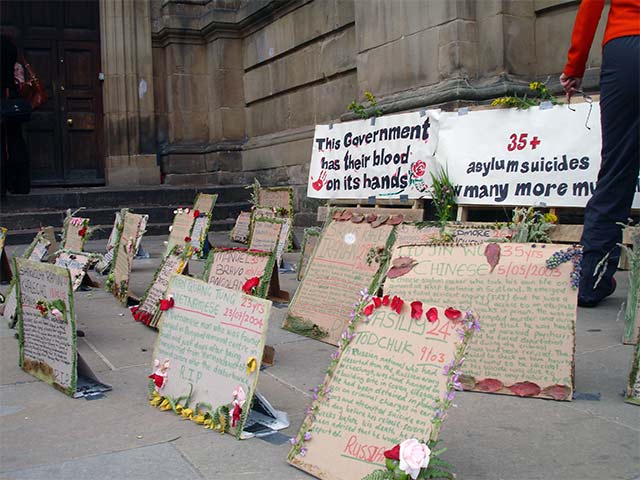 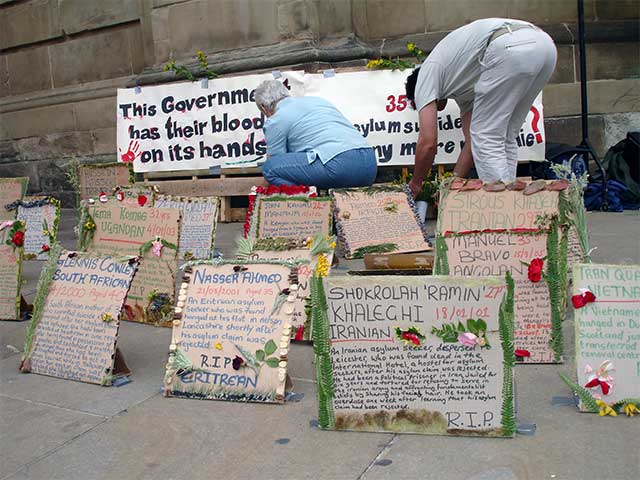 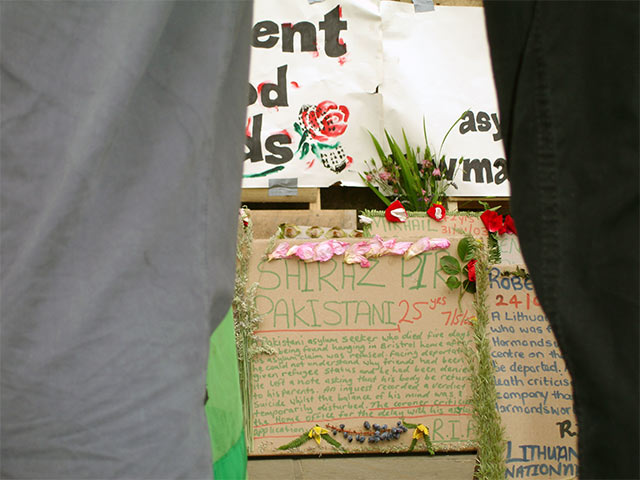 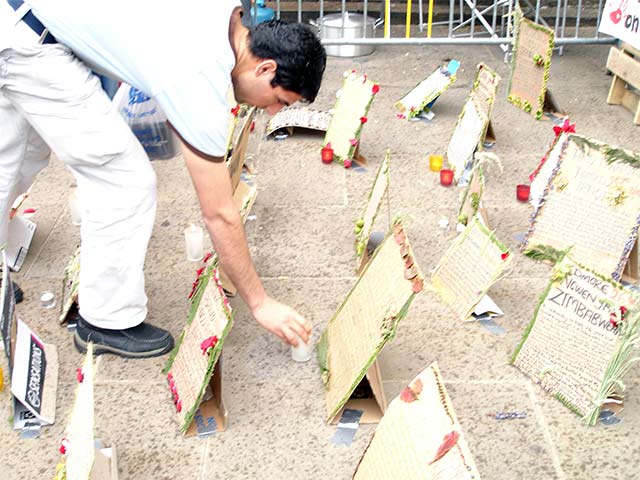 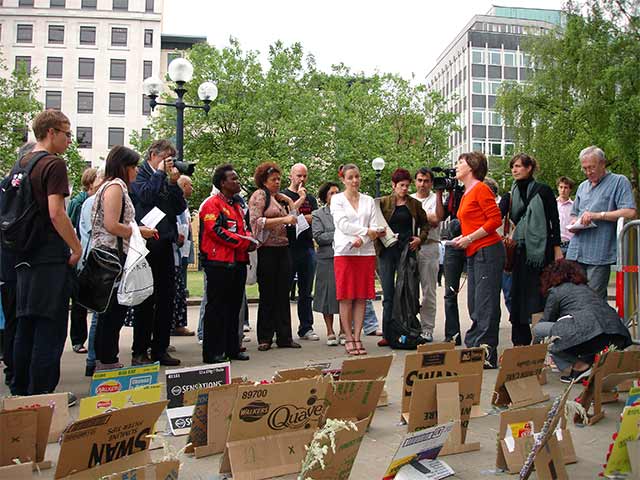 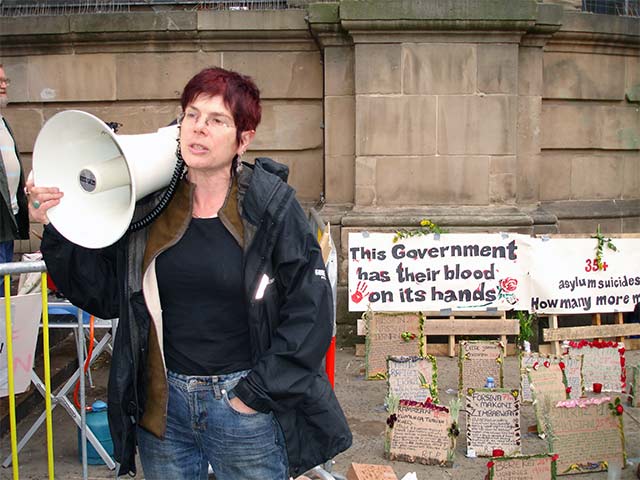 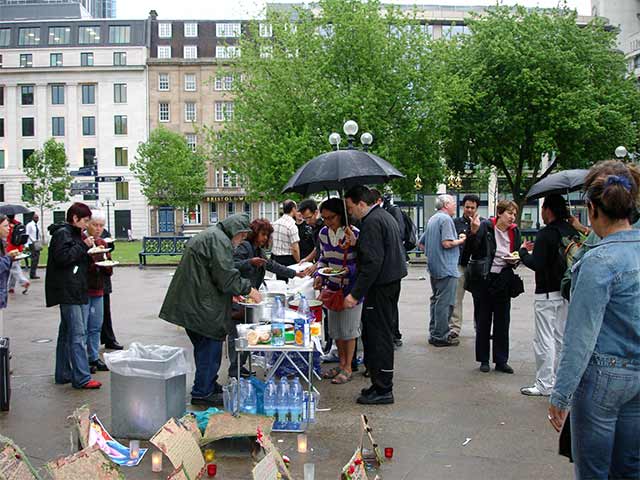 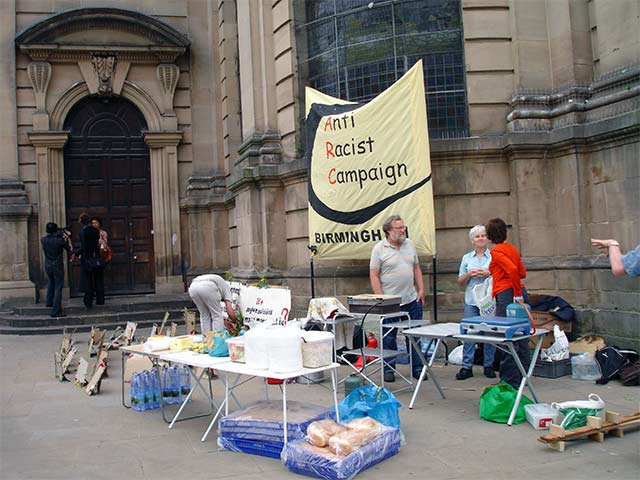 For the third year running, ARC has organised an event during Refugee Week, with the aim of "highlighting the terrible conditions that asylum seekers are facing as a consequence of the UK government's knee-jerk reactions to the mainstream media's witch-hunt of asylum seekers." This year, however, the usual Refugee Sleep-out was cancelled and, instead, a candlelit vigil was held to commemorate the lives of those unfortunate asylum seekers who took their own lives out of despair.

The signs, or "grave stones", were so visually powerful yet so simple to make. Nellie, a Zimbabwean refugee who has just been granted Leave to Remain in the UK after 4 years, explains how she made them at home with her two daughters. "I simply went around few shops and collected some spare cardboard boxes. We cut them and wrote the stuff. Then I went and nicked some plants and flowers from the park, and we pasted them on the cardboard pieces to make them look like grave stones.” “It was a lot of work, but was fun," she added.

For each one of the 34 victims, someone from the crowd, after reading out their name, lit a candle and laid it by their sign. Joyce, from ARC, then said a few words about the vigil, ARC's work and the suffering of asylum seekers, and so did Dave from Celebrating Sanctuary. The new dean of St Philip's Cathedral also delivered a speech. Bob Wills, who had just come back from a visit to Afghanistan, seemed to be quite well informed about asylum issues.

An updated version of ARC's old leaflet, “You are being lied to about asylum seekers”, was also distributed. It challenged, with facts and figures, the myths and lies that mainstream media have established through persistent stereotyping and scapegoating of immigrants and asylum seekers.

There was also some nice food served. But unfortunately, the bad weather and rain, combined with the sad fact that more people were interested in watching England's match against Sweden than remembering refugees, meant that the vigil didn't last long and fewer people were present this time.