"Chasing the Lying War Criminals" should alert you about Mr. Howard!

The big democracy (The UN General Assembly), little clique (the Security Council) and the ultimate democracy (millions of people around the world) opposed the invasion of Iraq with tragic failure! 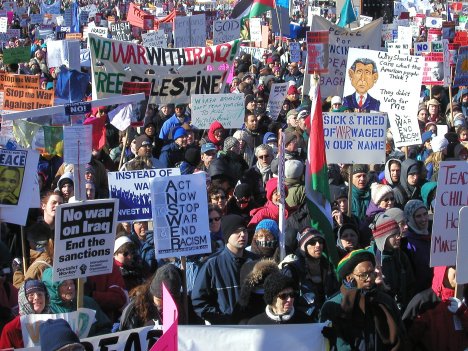 Millions of people around the world opposed

The Australian Prime Minister, John Howard, has responded to revelations in Saturday's Herald of his father's and grandfather's involvement in a postwar New Guinea plantation scam.

The Herald article said the two men had been involved in arrangements to buy plantations using dummy names, provoking a government inquiry. Mr Howard said yesterday: "Everything I knew of them [father and grandfather] indicated that they were decent, honest, hardworking, patriotic Australians who were very committed to their country."

Union leader Faruque Ahmed's question extended further due to some inelegant interjection from his documentary maker friend and another lovely lady who is not known to me. Therefore I am re-writing his question again.

I would like to ask you a question based on the following observations:

1. Three successive UN Assistant Secretary Generals responsible for Iraq prior to the 1993 invasion resigned in protest. All of them basically said 1.5 million Iraqi deaths resulted due to the sanction regimes are in essence genocide.

2. Three successive UN Weapons Inspectors like Scott Ritta, Hans Blix and Richard Butler fell from the grace by disagreeing with the "coalition of the willing" over the so called WMD in Iraq.

3. Many experts around the world are basically saying governments of USA, UK, and Australia are ignoring the advice of technocrats, bureaucrats and intelligence agencies resulting in disasters all around and all types.

4. It took seven serving US Generals to gang up and speak out for five minutes and then they were silenced for ever within 24 hours!

5. The big democracy (The UN General Assembly), little clique (the Security Council) and the ultimate democracy (millions of people around the world) opposed the invasion of Iraq with tragic failure!

Therefore the question ought to be asked, "who is running the government of USA, Australia or any where for that matter"?