For her, public participation on the streets outside the meeting's venue ''is the only available option for the victims of the Bank's programmes to protest. The meeting's credibility will suffer if demonstrations are banned.'' 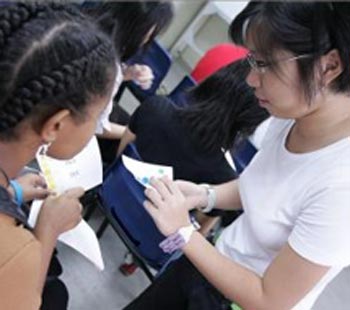 if demonstrations are banned

BANGKOK, Jun 22 (IPS) - Activists familiar with street protests outside the venues of annual meetings of the World Bank and International Monetary Fund (IMF) are in for a different treat at this year's gathering.

Singapore, the host country of the mid-September event, is sparing little to ensure that it lives up to its legacy as an affluent city state where universally accepted democratic principles -- such as the right to freedom of association -- are banned. The South-east Asian nation's penchant for thought control will be evident enough for the expected 16,000 delegates.

Till now, a broad group of activists who have written a letter to Singapore Prime Minister Lee Hsien Loong, requesting the government to permit the traditional anti-Bank protests, have still to receive a reply. ''(We are concerned) about the impending restrictions and threats reportedly being made that will hamper meaningful civil society participation at the upcoming ... meeting,'' the letter, sent in March, said.

The World Bank, however, has stepped in to assure activists that space for civil society is being negotiated to avoid what some critics of the international financial institutions says will undermine the credibility of the Bank's claims to promote good governance, accountability, transparency and democracy.

''We are working closely with the IMF and with the Singapore Government -- and have been for many months -- to ensure that diverse civil society voices are very much heard before, during and after the Annual Meetings,'' writes Peter Stephens of the Bank's Singapore office in a letter to the non-governmental organisations (NGOs). ''We believe that meaningful civil society engagement is critical to the effectiveness of the meetings.''

The letter also dismisses the argument made by the NGOs that the Bank and the IMF are trying to shut the door on the world's poor by giving shape to a restrictive process. ''Far from being a regulated or restricted process, as you appear to suggest, we are trying to enable a process that is open and led by civil society, and for the issues and means of addressing them to arise spontaneously, not through a formal process that we lead or try to manage,'' adds Stephens.

But for veteran civil society actors in Singapore, the Bank's letter appears to be out of touch with the stubborn reality on the ground in the city-state. ''It will be nearly impossible to protest in Singapore for locals,'' Sinapan Samydorai, head of Think Centre, a human rights NGO, told IPS. ''Locals trying to express any political opinion in public will require a license. The licenses are often denied to locals.''

There is a possibility, though, that the Lee Hsien Loong administration, may provide space for select foreign groups, he adds. ''The government may permit a selected number of foreigners to march peacefully -- with the required license -- to show-case that there is 'freedom' in Singapore. Controlled and managed, it will boost the image of Singapore.''

Concern about the oppressive measures that await activists in Singapore emerged as early as February, when Home Affairs Minister Wong Kang Seng issued a threat that public protests may ''attract severe punishment, including caning and imprisonment''. The restrictive law against public gatherings -- where any gathering of more than four people need a security permit -- was introduced by the British when it ruled this country as part of its colonial empire. The military dictatorship in Burma, also a former British colony, keeps Singapore company by upholding the same law.

And the installation of nearly 158 closed circuit television (CCTV) cameras to monitor activity at 67 traffic intersections and at the venue of the September meeting, Raffles City, a shopping mall and convention centre, will make it easier for the country's police to respond to protests without permits.

Among the examples of a typical Singaporean response to local protestors who dare to think independently -- than succumbing to the thought control measures of the country -- was the arrest of four demonstrators calling for greater accountability and transparency of the state-managed pension fund. This silent protest in August last year brought out nearly a dozen anti-riot police in full battle gear, including helmets, shields and batons.

Neither the police nor the courts accepted the fact that these demonstrators had not broken the law, since they were below the required number that needs a permit, M. Ravi, a human rights lawyer who handled this case, said in an IPS interview. ''The court ruled that even one person protesting and saying unfavourable things against the government is incendiary.''

According to Ravi, the government does not compromise on this measure to control dissent and alternative views in the country. ''It is extremely serious about the bans against public demonstrations.''

The recent parliamentary elections in May, where the ruling People's Action Party (PAP) was returned to power, served up large helpings of the bizarre quality of Singapore's ruling dynasty. The country's founding figure, former prime minister Lee Kuan Yew, father of Lee Hsien Loong, justified these authoritarian measures as a mechanism needed to transform this malaria-infested trading port in the late 1950s to a development success story.

At the poll, the PAP marginalised opposition parties by banning their use of the electronic media to campaign, denying the leader of the Singapore Democratic Party a chance to campaign in public, banning his speeches being read by others in public and police intimidation of other candidates that made normal political activity look like a crime.

Yet Lee Hsien Loong did not consider such violations of political and civil liberties a problem. On the eve of the poll, he was quoted as having told 'The Straits Times,' a government mouthpiece, that ''the political system here is as fair as you can find in any country in terms of your being able to stand up, to have a view, to organise, to mobilise and participate.''

''(You do) not need a lot of money or a lot of power to get moving,'' he was quoted as saying.

Shalmali Guttal, a senior researcher at Focus on the Global South, a regional think tank, wishes that was really so. ''This year's annual meeting seems very suspicious to us because the World Bank and the IMF are still uncertain about the calls by civil society for demonstrations to be permitted. Failure will only prove to us that the hegemony of these institutions continues at the expense of democracy.''

For her, public participation on the streets outside the meeting's venue ''is the only available option for the victims of the Bank's programmes to protest. The meeting's credibility will suffer if demonstrations are banned.''