In 2005, the Alkatiri government was reported to have entered into negotiations with Petro China to build oil refining facitilies in East Timor, which would undermine Australian plans to build a refinery in the northern Australian city of Darwin to process all Timor Sea oil from both sides of the border. East Timor president Xanana Gusmao was to visit China this month to cement the deal, but this has been blocked by the Australian military. 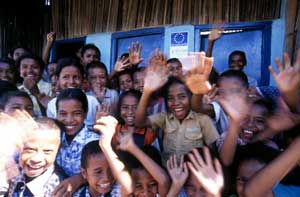 Blocked by the Australian military

SYDNEY, Jun 22 (IPS) - A two month old rebellion by sacked army officials and police deserters in East Timor, one of the world's newest and poorest countries, has resulted in an Australian-led "peacekeeping" force arrival in its capital Dili, and a media-supported push for ‘regime change'.

Prime Minister Mari Alkatiri, a Muslim leading a predominantly Catholic country, is the leader of the Fretilin Party which fought for independence from Indonesia for over two decades, and which won a landslide victory in the first legislative elections in 2001.

In Australian media reports, which in turn influence regional and international reporting of the issue, the crisis in East Timor is painted as an internal power struggle where an "unpopular" Prime Minister is opposed by a peoples' movement. The words "oil" and "gas" are hardly mentioned in these reports, even though this is at the heart of the Australian intervention.

The history of East Timor independence is also the history of Australian policy flip-flops and attempts to lay hands on the vast oil deposits in the surrounding seas, now valued at over 30 billion US dollars. Yet, Australia has always painted its support for East Timorese independence as a "human rights" or "humanitarian" mission. Even today the media reporting here reflects that.

Speaking on ABC Radio recently, James Dunn an advisor to the United Nations Mission in East Timor (UNMET) in 1999, described Alkatiri as a "politician who had close relations with the people" and added that he is also an efficient worker and a good bureaucrat, but not an "easy person to deal with".

It is his tough stance negotiating East Timor's rights to its oil and gas reserves with Australia over the past 5 years which has earned him the wrath of the Australian government -- which has tried to bully its poor neighbour into submitting to Canberra's ambitions to control exploration and exploitation of these natural resources.

Rob Wesley-Smith, spokesman for a Free East Timor believes that Alkatiri has dictatorial tendencies and Fretilin has become corrupted, but, he blames the government of Australian Prime Minister John Howard for precipitating the crisis by "abrogating since 1999 all the disputed oil revenue of around 1.5 billion dollars to Australia".

"Despite this area being disputed, almost certainly under UNCLOS (UN Commission for the Law of the Sea) rules, it belongs to East Timor" he told IPS, adding that television images of Australian troops who arrived in Dili where they stood by watching as looting and burning went on made him wonder, if it was a part of a sinister plot by Canberra to declare East Timor a failed state "so that they could control the Timor Sea (oil) theft".

Wesley-Smith pointed out that while Australia took almost 1.5 billion dollars in royalties from the disputed oil fields in the Timor seas since 1999, they have given back approximately 300 million dollars in aid over the same period, thus making it dependent.

Australian academic Helen Hill, author of ‘Stirring of Nationalism in East Timor", argued in a recent newspaper article that the reason Alkatiri is hated by the Canberra establishment is because, while being the only East Timorese leader standing up to Australian government bullying tactics, he has also been building links with Asian countries like China and Malaysia, Cuba, Brazil and former colonial power Portugal to help diversify East Timor's economic ties.

"He is an economic nationalist," notes Hill. "He hopes a state-owned petroleum company assisted by China, Malaysia and Brazil will enable Timor to benefit from its own oil and gas, in addition to revenue it will raise from the areas shared with Australia"..

Alkatiri has also spoken out against privatisation of electricity and managed to set up a "single desk" pharmaceutical store, despite opposition from the World Bank. He has also refused to take conditional aid from the World Bank and the IMF, invited Cuban doctors to serve in rural health centres and help in setting up a new medical school, abolished primary school fees and introduced free mid-day meals for children. All these, and the fact that he was educated and spent 24 years in exile in Marxist Mozambique have been cited by opponents in Australia as hallmarks of a communist leader.

In contrast, the rebel leader Major Alfredo Reinado, a former exile in Australia is believed to have been trained at the national defence academy in Canberra, and Australia's preferred candidate for the prime ministership foreign minister Ramos Horta set up the diplomatic training programme in Sydney during his years of exile in Australia.

Speaking on ABC-TV this week, Horta argued that East Timor cannot "afford this increasing loss of credibility of the government and poor image of the country", thus Alkatiri should step aside in the interests of his own party. Dismissing allegations made in the same programme that he has armed Fretilin members to eliminate his opponents, Alkatiri said he is under no pressure to resign and he will not do so.

The current campaign against Alkatiri reeks of policy flip-flops of successive Australian governments on East Timor since 1975 attributed to its desire to control the Timor Gap oil and gas resources.

After supporting the Indonesian annexation of 1975, in 1989 Australia and Indonesia signed the Timor Gap Treaty (TGT) to share the resources in the area. The UN Transitional Authority in East Timor declared the TGT illegal and in 2001, Australia signed a MOU with the UN authority to allow continued oil exploration in the region.

But, just before East Timor became full a independent state in 2002, the Howard government announced that it would no longer submit to maritime border rulings by the World Court an act which Alkatiri described at the time as "unfriendly" and "tying the hands" of the incoming government.

Since then, Alkatiri has had a series of heated arguments with Australia's foreign minister Alexander Downer over the issue. After bitter negotiations, in January Alkatiri was able to get Canberra to agree to a 90-10 share in East Timor's favour, of the proceeds from the Greater Sunrise field. That was after agreeing not to proceed for at least 40 years with East Timor's claim to the disputed sea under the UNCLOS convention, by which time most of the oil and gas in the area would be exhausted.

In 2005, the Alkatiri government was reported to have entered into negotiations with Petro China to build oil refining facitilies in East Timor, which would undermine Australian plans to build a refinery in the northern Australian city of Darwin to process all Timor Sea oil from both sides of the border. East Timor president Xanana Gusmao was to visit China this month to cement the deal, but this has been blocked by the Australian military.

Sydney University political scientist Tim Anderson believes that the Howard government plans to impose a "junta' on East Timor led by Horta and an ailing Gusmao, which would also include Catholic bishop nominees. "Presence of occupying (Australian) troops till next year's election might seriously undermine Fretilin's dominant position" he notes. (END/2006)