Yesterday despite the courageous efforts of Ian and Tony Blair, terrorists were able to assemble outside parliament and engage in illegal activity. Unbelievably the MET who are seen as world leaders in the fight against terror had licensed the event to happen!

A MET spokesman said: “Obviously this a blow to morale after our successes in Stockwell and Forest Gate, but we will learn from this and ensure that we are ready for them next time”. The incident happened when a protest was booked to support the PKK’s demands for human rights in Kurdistan. Bungling plods failed to notice that the PKK are illegal under recent terror legislation and so put already terrified Londoners lives at risk.

Life long Daily Mail reader Mrs Edna Agast said: “I don’t what my inheritance tax is going on? They clearly have not shot enough people yet, they only wounded the last one. It’s just political correctness gone mad!” Readers of The Sun are said to be organizing a campaign of direct action in protest at the MET’s incompetence. Meanwhile the Daily Mail are setting up a helpline for Londoners worried about their house prices. 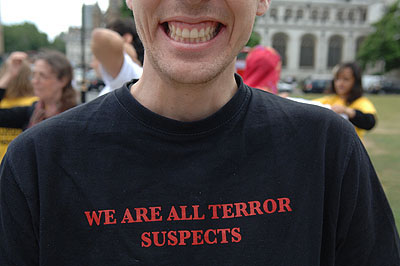 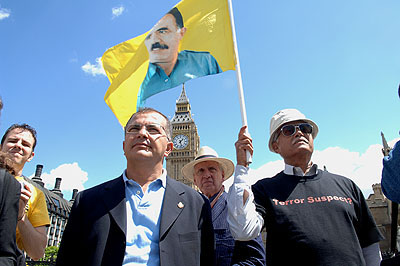 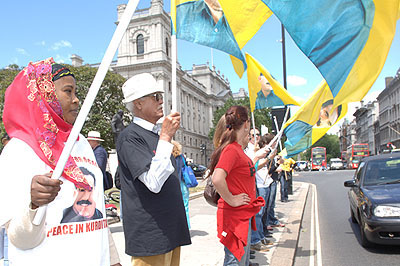 ....to strike terror into our hearts. 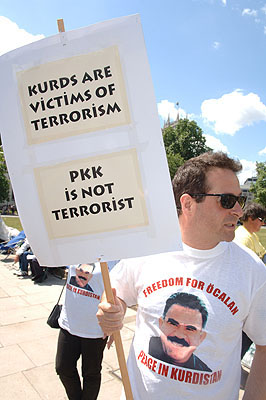 This ILLEGAL placard was ALLOWED! (Unlike most of Brian Haw's display) 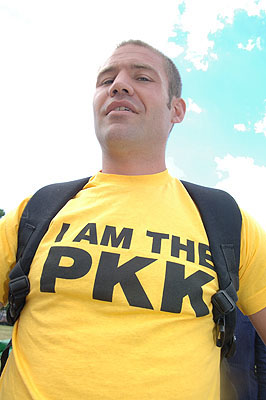 This terrorist has shaved off his beard but the t-shirt gives him away. 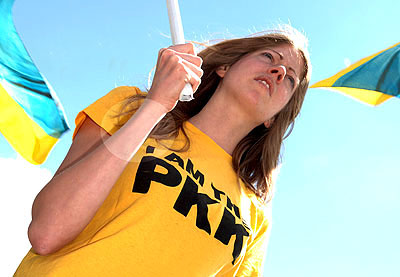 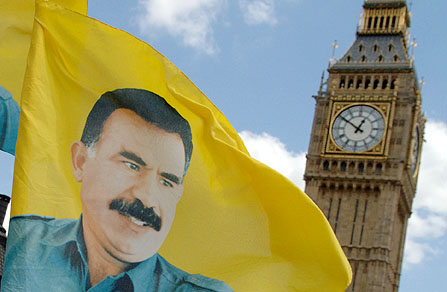 The Face of Terror!! (and Ocalan)

On a serious note, the human rights abuses in Kurdistan continue to this day. Kurds recently wanting to protest outside the Turkish Embassy were threatened under anti terror law for having placards saying “The PKK is not terrorist”. This just goes to show how a shit law can be used by anyone wanting to stifle dissent. The only way to get rid of a law is to make it unworkable and one of doing that is to make it look ridiculous. The fact that the MET are happy to license what is technically speaking and illegal demo, while spending everyone else’s money arresting and prosecuting someone for ready out the names of dead British Soldiers outside of Parliament makes the point very well.

Anyone wishing to test the parameters of the SOCPA legislation will find that Charing Cross nick are remarkably cooperative when it comes to organizing protests within the SOCPA zone. All that needed is a little imagination……….

but heaven help you if you don't seek authorisation....

"Charing Cross nick are remarkably cooperative when it comes to organizing protests within the SOCPA zone" as long as they can continue imposing their ridiculous and unlawful conditions on brian haw. it seems that as long as you're not brian haw (who for more than five years has been pointing to the government's genocide and use of depleted uranium munitions in afghanistan and iraq), then no conditions are applied. but brian has to fit in a little 3 metre slot, with other draconian rules about what he can and can't have with him.

and if you don't ask the met for permission to hold up your banner in the socpa zone, you also stand the chance of getting beaten up by over-zealous thugs from charing cross (see