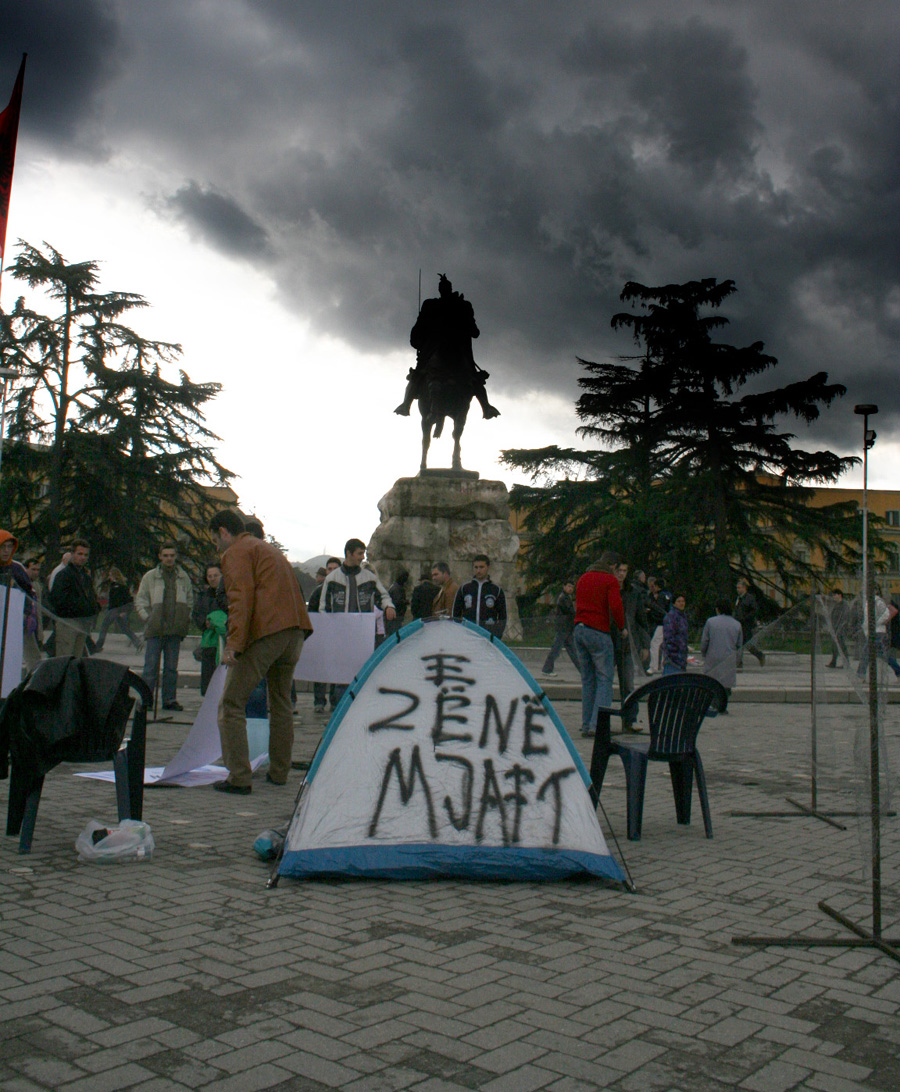 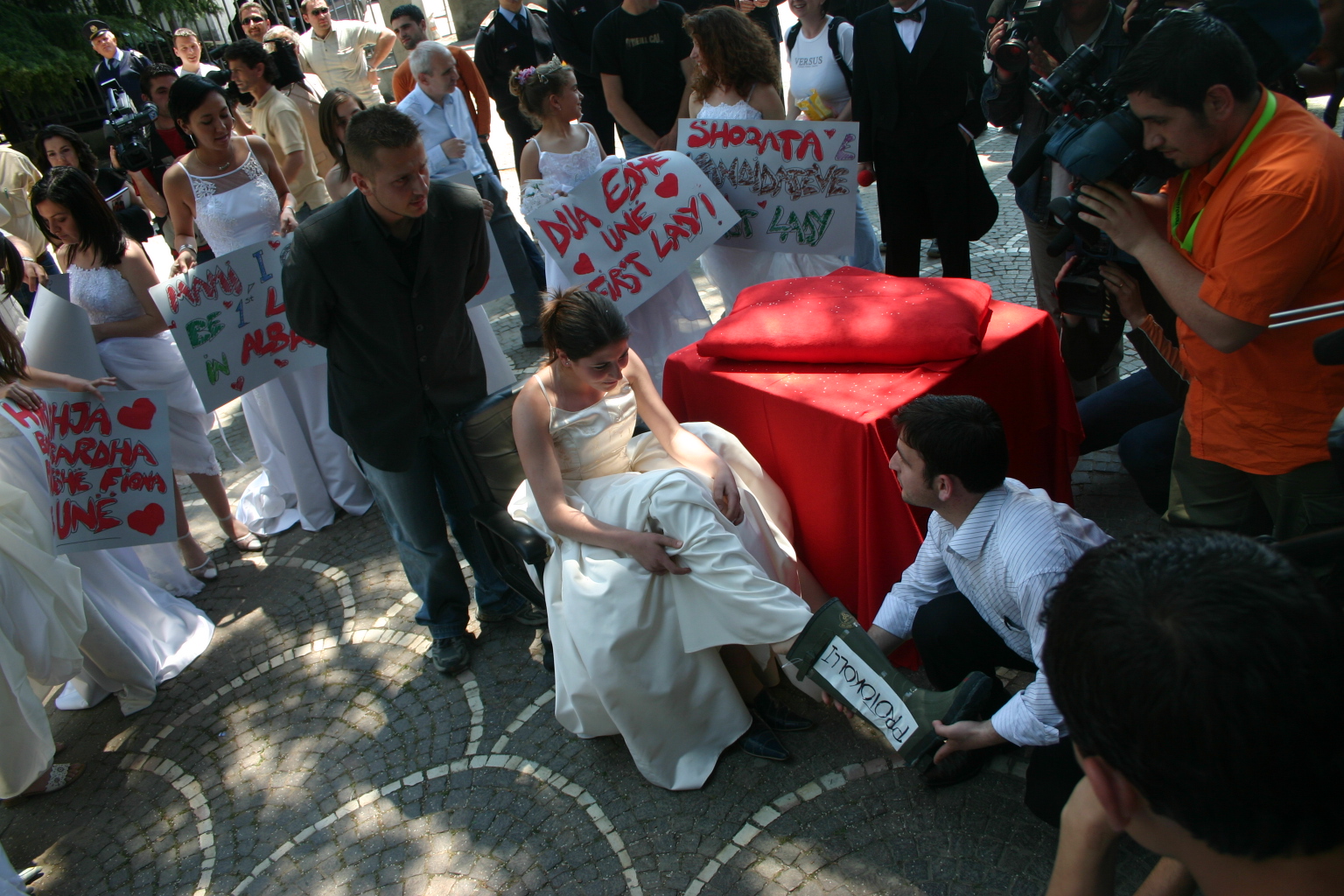 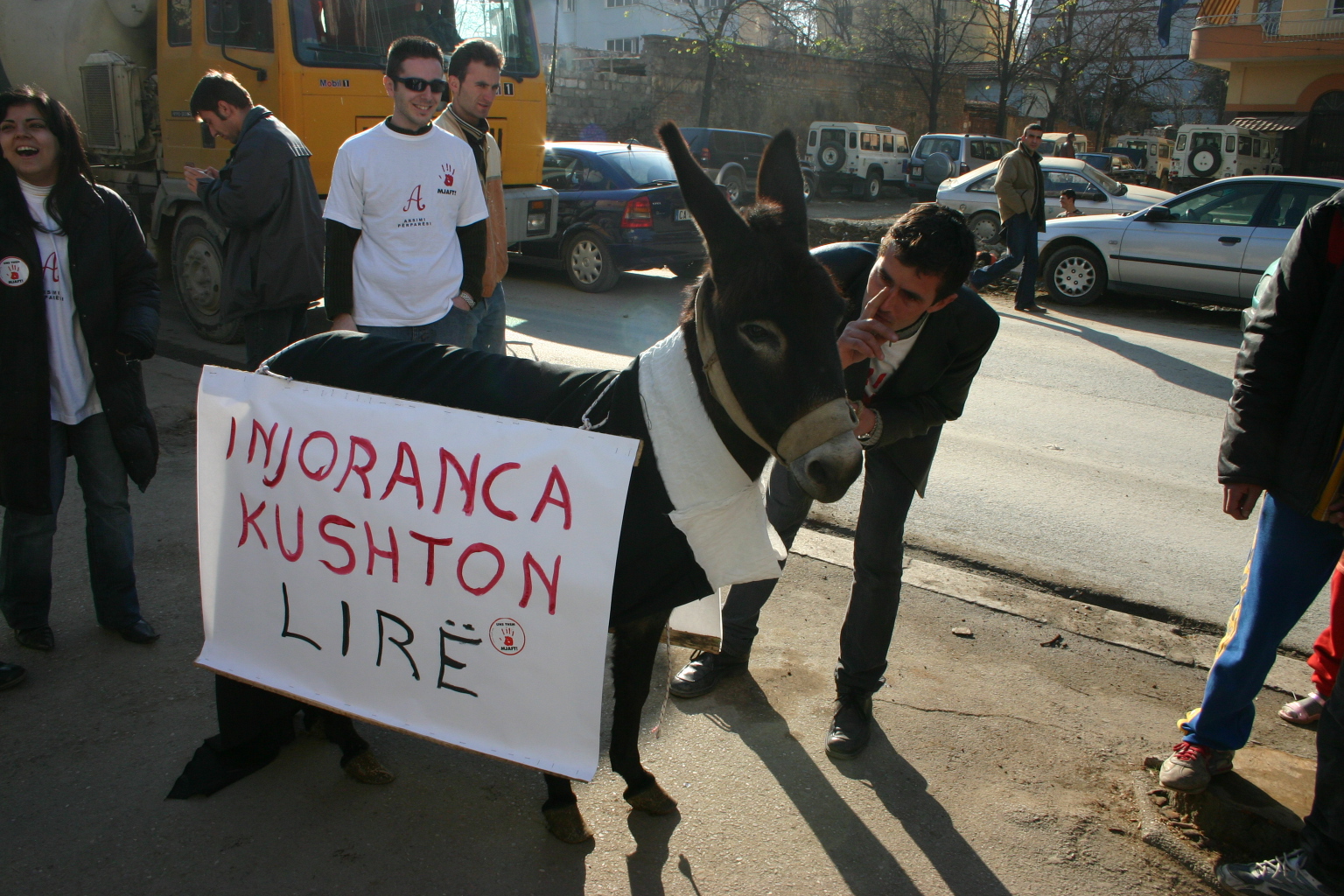 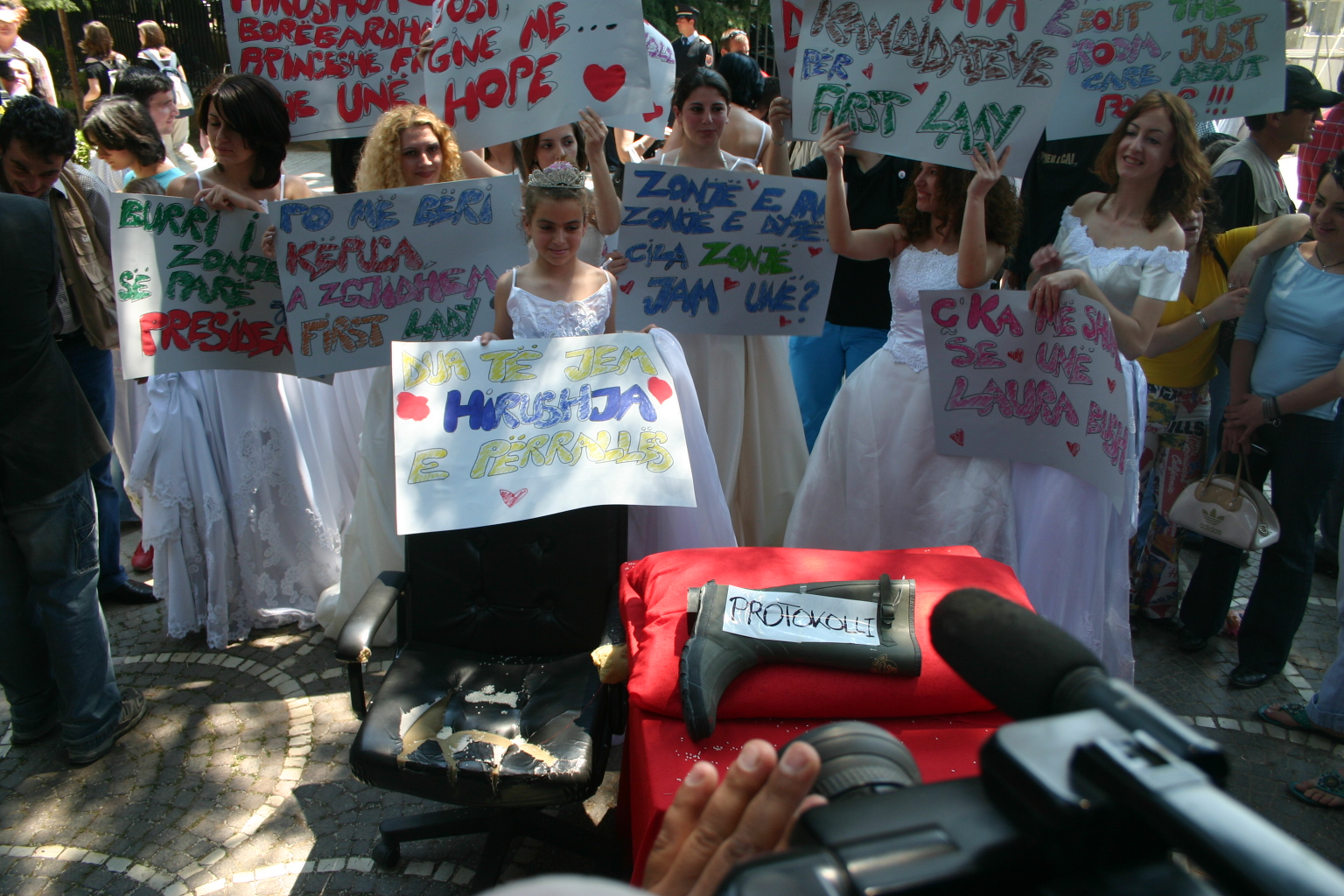 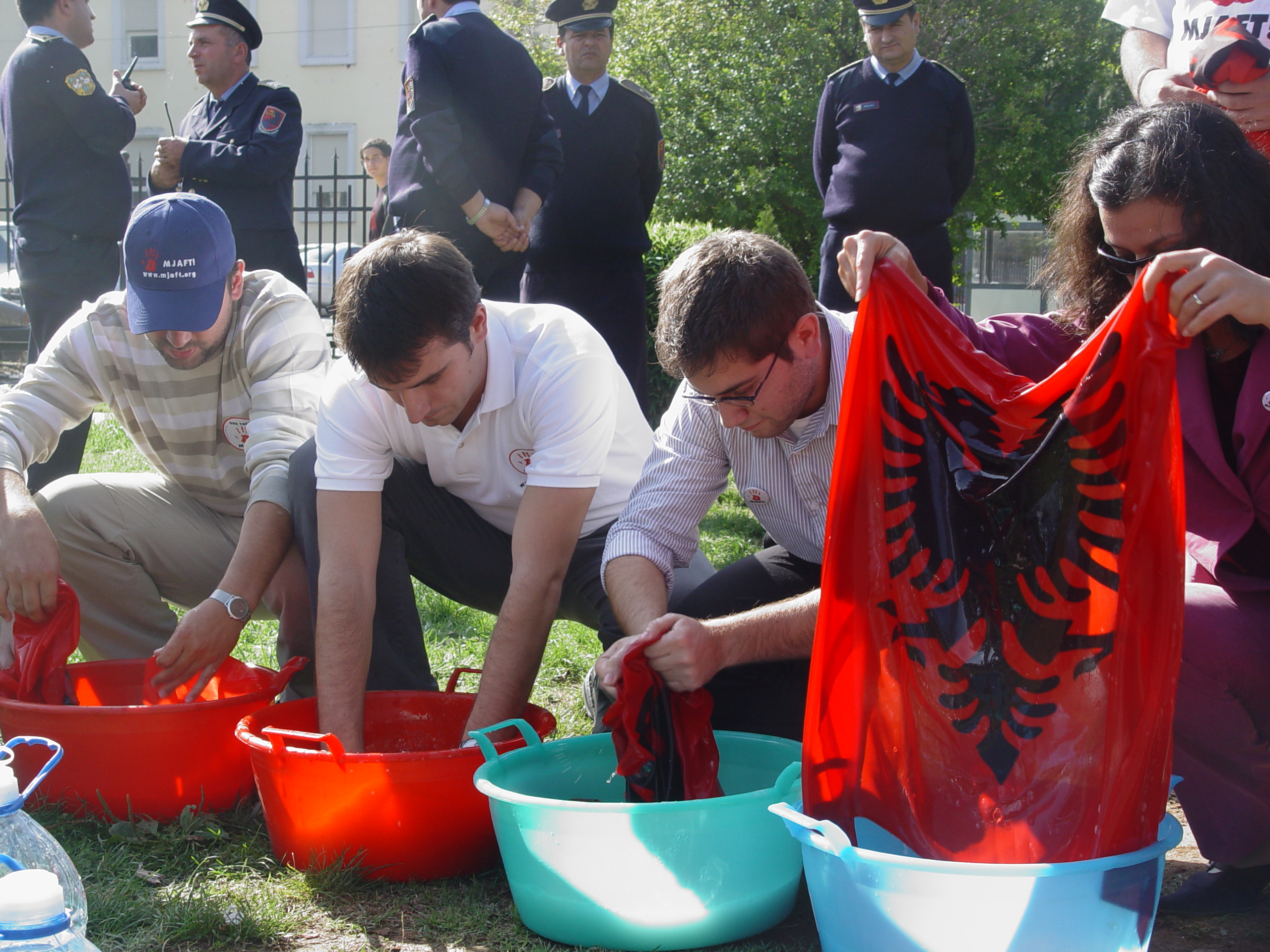 Interview with Leart Kole, one of the organisers of direct actions of Mjaft

Mjaft was created in December 2002 by a small group of young people. Our starting point was simple: many people in Albania are used to complaining that nothing works here, that politicians are bad, that there is a lot of corruption, etc. So we as a group of young people said that we believe that Albanians can actually take their fate in their own hand: what can we do to change the situation in Albania? Since then we've grown into a civic movement trying to shake civic apathy. We try to make people active in their social life and in politics, and we help them setting up groups that are lobbying for their daily interests in Albania. Also, we aim to improve the image of Albania abroad.

What campaigns has Mjaft been involved in recently?

A main campaign that has been going on since the start of Mjaft is the campaign for raising the budget for education. To raise awareness about this issue, we brought a donkey dressed up as a student in front of the parliament, to show that the planned education budget would result in ignorance among the people. Our most recent action has been planting flowers in holes in the roads and at places with a lot of garbage, as protest against the destruction of the roads and the culture of throwing waste on the streets.

How does Mjaft develop its campaigns?

Rougly it's like this: first we organise civic direct actions, to raise awareness about the issue, then we ask people in Albania to sign petitions, to make the campaign widely supported, then we start a lobby together with them at the parliament.

Why does Mjaft use creative activism, direct action in its campaigns?

One of the main aims of Mjaft was to change the culture of protesting in Albania. Before we started, street protests were top down organised events, political parties using citizens for their political games. They were rallying people to go on the streets and behave aggressively, with the aim to overtake the power. Protesting meant going into the streets with guns and stones. When in 1997 the state collapsed, everybody had a gun. First the socialists got into power by using violent street protests, then one year later in 1998 the democrats used the same violent method. In the last 10 years we have had only the aggressive style of protesting, people being killed in the street.

In Mjaft we aim to change this mentality of protesting, by making protests into art, introducing a kind of soft, creative form of protesting that doesn't violate the people's minds but gives them a laugh. More confrontational direct actions, like blockading roads, would be counterproductive. Albanians are very tired of confrontations with the police and anything aggressive. So we provoke in a non-violent, creative way.

You are the first organisation after the fall of the dictatorship in 1991 that started introducing a culture of creative direct protest in Albania. How did the authorities react?

By being non-violent, we give the police no excuse to be violent to us. This method works very well, and helps us to spread our messages. So generally, the authorities and polices don't interrupt us. But it also depends on the issue. Sometimes authorities do try to give us a hard time. For example, we were campaigning against a contract that the prime minister had signed with an Italian company, to build an insinarator just outside Tirana. This was a campaign directly against the prime minister and he didn't like this. So the authorities tried to give us the feeling that we are vulnerable, and that they can create problems for us whenever they want. They published strange stories about our personal life in state media, did regular tax controls of Mjaft to burden us with bureaucratic work, and police were stopping cars of Mjaft members trying to provoke them. Also we weren't give permission for public actions against the insinarator. Still we did actions. At one of them 2000 protesters went on the street wearing white dust masks, to make clear how life would be in Tirana once the insinarator would be working. Some people were arrested during this demo, but they were only held for a few hours. We know that authorities can't do something bad to us as long as we stay calm. In the end, the contract with the Italian compagny was canceled.

How did citizens react to creative direct actions?

In the beginning rather sceptical, because they associated actions in public space with top down organised political events. Protests from below were new to them. We first tried to build up support among students and high school pupils, because they are generally less stuck in politics and more able to react on behalf of their own interests, and open to new ways of protesting. Then later on we aimed to become a broader movement, part of all society. We visit communities and have meetings to discuss urgent issues like high electricity prices, and invite them to be part of our protests. In this way we are trying to organise people that are not organised.

Where did you learn the direct action methods from? Are there examples of direct action from the West or the East that you find inspring?

Otpor in serbia was the main example, using differents technics of creative protests and street art during the demos against Milosevic. We adapted these forms of using art and creativity to the Albanian society and the Albanian mentality. For example, in Albania there is the problem of a big black market: traffiking, weapons, visa. We wanted these issues to be discussed openly. So we organised a street fair: young people in daytime on the main square of Tirana selling visas and prostitutes. Some people actually tried to buy visas. The action provoked a lot of reactions from people and media, both positive and negative. It brought major underground problems in the public.

How does the media portray your direct actions?

How we are portrayed, depends on the political situation. Both pro-government and opposition media try to portray us in the way they consider useful for their political power struggle. This is a problem all around the Balkan. But generally the media pay a lot of attention to our actions, and like that we're able to spread our messages. Also we have our own newspaper, in which we explain our our opinions and annouce actions.

One critique on you is that you've developed from a direct action group into an established lobbying group...

I don't agree. In the people's mind, Mjaft is a group of girls and boys going into the street doing strange stuff. This is our image. And it's our strength. If we would stop this, we would loose the power to try to change the social and political situation. If we would want to become a think tank or a lobbying organisation, or a political party we would loose the support of the people. All the young people who are Mjaft activists and volunteers, have not joined us only to see the Mjaft head office have disccusions with politicians. They have joined us to be active, and be part of actions. We want to continue combining civic action with lobbying and advocating in parliament. The power of Mjaft is that we are not linked to political parties. We are a political party of the people, to use a communist turn. Mjaft without direct civic actions would not be Mjaft anymore.