Not been invited to the G8 Summit this year?

Never mind, Indymedia London is hosting an eight day film festival in London venues with no obligation to buy a gallon of Coke or a bucket of popcorn. And up in Sheffield there is a Summer of Truth film festival with screenings every Sunday in July.

For the full programmes and venues click at the 'full article' link above. 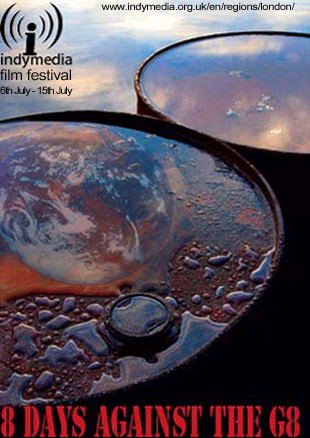 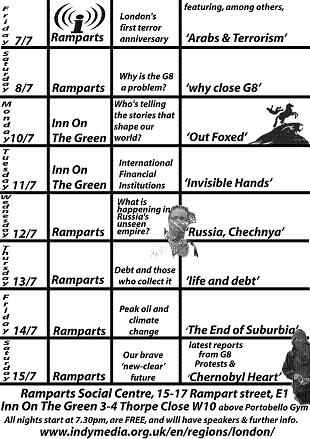 The festival coincides with this year's summit of the 8 most powerful capitalist states on earth, taking place in St. Petersburg, Russia. Each day follows a theme ranging from debt to climate change to terrorism, kicking off on Friday 7th - the first anniversary of the London bombings - special screening with "The Power of Nightmares", "Arabs and Terrorism" and "America, America". Saturday 8th with Camcorder Guerillas "Why Close The G8?", Pilton's, "Won't Be Fooled Again" and on also at Ramparts Social Centre.

Monday sees the festival moving west to Ladbroke Grove's Inn on the Green for a couple of days, dealing with issues of The Media and, on Tuesday, International Financial Institutions

On Wednesday 12th the festival's back in the East End at Ramparts to consider "What's happening in Russia's unseen empire?", Debt (thursday) and Peak Oil and Climate Change(Friday) The festival wraps on Saturday 15th on the topical issue of 'Our brave New-Clear Future"

All nights start at 7.30pm, are FREE, and will have speakers & further info.

A Month of Film Screenings on:

Every Sunday in July at SIF (Sheffield Independent Film), films start at 6:30pm and 8pm 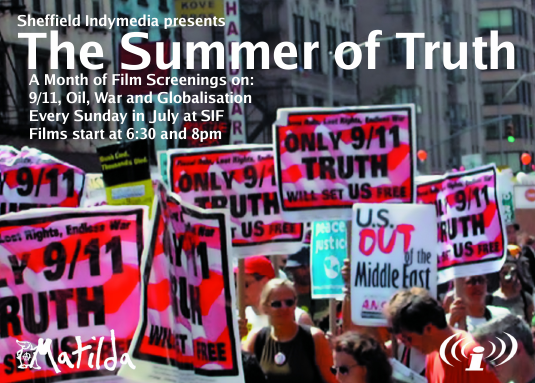 The Summer of Truth 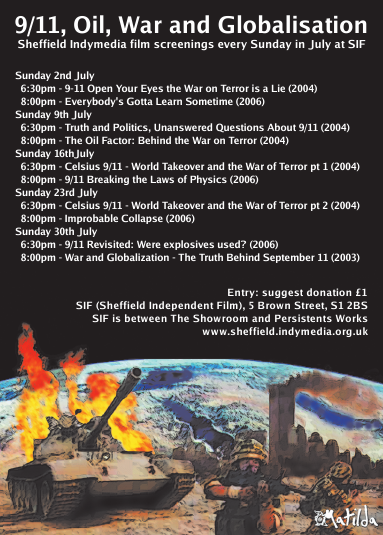 Sheffield Indymedia has organised a series of film screenings that challange the concept of the perputal 'war on terror' and questions the real motives of the governments and corporations who are promoting this war.

These films have never been seen on TV or screened in the cinema.

One of the central themes of many of the films is the proposition that the attacks in New York and Washington on 11th September 2001 were actually an inside job organised by elements within the US administration in order to win public support for an offensive war to gain control of oil resources in the Middle East.

The films are screening every Sunday evening in July at SIF (Sheffield Independent Film) on Brown Street, entry is a suggested donation of £1 and there will be time for discussion about the issues raised in the films after each screening.

The films were due to be screened at the Matilda Social Centre but have had to be moved to SIF due to Matilda being evicted.

For the full listing of the films see the Summer of Truth page.

Do your bit for climate change during the film fest

rampART will be doing it's bit for climate change and ensuring a more comfortable environment for you to sit and watch films by installing air conditioning this week (assuming that there are still possible to buy in the current heat wave). The move comes following several deaths due to heat exhustion at recent events and increased pressure by the forces of darkness over the issue of 'noise' and anti-social behavior from people apparently attending events at the rampART (although we have our doubts).

Along with improved ventilation resulting from the removal of just one brick in the wall, it is hoped that he addition of air conditioning will encourage people to stay inside the sound proofed building during events rather than hang around outside shouting and pissing in our neighbours doorways. And of course you can also expect ice cold drinks to be available and don't forget the roof 'garden' if you really must enjoy the 'pleasent' summer evening weather.