In other words, Labor differences with Howard are purely tactical. It believes that the “national interest”—that is, the interests of the Australian corporate establishment—would be better served by concentrating military activities in the region, where substantial oil, gas and other strategic interests are at stake. 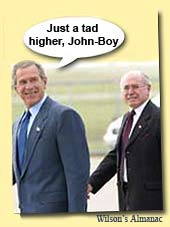 “Coalition of the Willing”

In the face of a deepening crisis within the Bush administration’s “Coalition of the Willing” in Iraq—Japan is pulling its troops out, following Italy, Poland, Ukraine, Spain, the Netherlands and Hungary—the Australian government has decided to escalate its military commitment.

Despite broad popular hostility throughout Australia to the illegal occupation, Prime Minister John Howard told parliament on June 22 that Australian soldiers would stay until the “job has been finished”.

When Howard last escalated Australia’s involvement, by sending 450 troops to the southern province of Al Muthanna in early 2005, the pretext was the protection of a Japanese military construction contingent. But Japanese Prime Minister Junichiro Koizumi has confirmed that Tokyo is withdrawing.

Howard announced that after Japan’s contingent departed, the Australian taskforce would take on a new “higher risk” role in dealing with resistance to the US occupation. Most of the 450 soldiers would be shifted to an American air base at Talil, near the city of Nasiriyah, where they would undertake a “range of activities,” including “direct military action” to “support the Iraqi authorities in crisis situations”.

Howard’s announcement underscores his government’s determination to cling to the Bush administration, no matter what the human cost. He said his government was “keenly aware of the risks associated with this new mission”, referring to the likelihood of Australian casualties.

Until now, Howard has tried to contain the domestic opposition to the war by keeping most of the 1,300 Australian troops in Iraq well away from the most dangerous areas and the major US military offensives. Only one Australian soldier has died there—Private Jake Kovco, who apparently shot himself last month in yet to be explained circumstances—compared to more than 2,500 Americans.

Just hours before Howard spoke to parliament, Australian troops in Baghdad were involved in an attack that gave a glimpse of the daily mayhem on Iraqi streets. Soldiers in a heavily-armoured Australian reconnaissance convoy opened fire on bodyguards protecting the Iraqi Trade Minister, Abdul Falah al-Sudany, killing one and injuring four others. Such incidents have only fuelled local resistance to the occupation, making retaliatory attacks and casualties ever more likely.

Howard’s determination to “finish the job” in Iraq indicates how much is at stake for Australian military, strategic and economic interests. His government was one of just three to directly participate in the March 2003 invasion. Its primary aim was to secure US support for Australia’s neo-colonial operations in the Asia-Pacific. At the same time, it wanted at least a small slice of the carve-up of Iraq’s resources and markets, notably via Australian Wheat Board (AWB) exports.

Canberra’s mercenary calculations were highlighted last week by the release of documents from the official inquiry into the AWB’s payments of bribes to Baghdad to secure wheat sales to Iraq under the UN “oil for food” program.

The records show that within weeks of the invasion, Australian Foreign Minister Alexander Downer assured Australia’s biggest mining company, BHP Billiton, that he would help it win control of Iraq’s huge Halfayah oilfield. At the same time, Downer warned the company that its push would be “very sensitive” because the US-led coalition had denied “there would be blood for oil”.

Records of a meeting between Downer and BHP executives in London in May 2003 show that BHP was also lobbying influential figures in the US and British governments, including US Vice-President Dick Cheney, and had a key contact in Baghdad—former Shell Oil of America boss Philip Carroll, who had been handpicked by the White House to advise the US-installed Coalition Provisional Authority.

Downer told the executives he would be “happy to talk to the US about the Halfayah bid,” but suggested that any decision would have to appear to come from “the Iraqis themselves” because “the Australian government had said sincerely that it had not joined coalition forces on the basis of oil”.

Even more significantly, since the invasion of Iraq in March 2003, Washington has provided full backing to the Howard government’s neo-colonial military interventions in the Asia-Pacific, starting with its dispatch of troops to the Solomon Islands in July 2003.

Three years on, Howard is relying heavily on US support for his current bid to oust the Fretilin government in East Timor and reinforce Australian control over the oil and gas in the Timor Sea. He was only able to dispatch troops into Dili, in what amounts to an Australian occupation of the tiny half island, on the basis of the full endorsement of the Bush administration, which sees Howard as a loyal agent in warding off China and other US rivals in the resource-rich region.

In his parliamentary reply to Howard, Labor leader Kim Beazley claimed that Labor opposed the Iraq war, calling it a “profound mistake”. The truth of the matter is that, at the time of the invasion, Labor argued that Australian troops should be deployed, but with an explicit UN mandate, as was the case in Afghanistan.

Later, Labor called for the troops to be withdrawn, not on the basis that the Iraq war was a criminal and illegal enterprise, but in order to shore up Canberra’s own interventions in the Solomon Islands and East Timor. Now that Japan has pulled out of Iraq, the party wants the Al-Muthanna taskforce to leave as well. Beazley declared that the troops needed to be engaged in a different mission—in “the arc of instability, in the region around Australia ... that is where our focus ought to be”.

In other words, Labor differences with Howard are purely tactical. It believes that the “national interest”—that is, the interests of the Australian corporate establishment—would be better served by concentrating military activities in the region, where substantial oil, gas and other strategic interests are at stake.

Likewise, in the Senate, both the Greens’ Bob Brown and the Democrats’ Andrew Bartlett called for the redeployment of the troops from Iraq closer to Australia. While the Greens posture as an antiwar party, on May 13, the day that two Australian warships set sail for Dili, Brown issued a media statement declaring that the events in East Timor proved that Australian troops needed to be recalled to “cover multiple crises in our neighbourhood”.