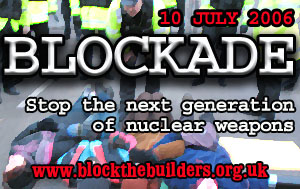 BLOCK THE BUILDERS
PRESS RELEASE 7 July 2006
------------------------
This week the release of a 2005 MoD report under a Freedom of Information Act request has confirmed what anti-nuclear campaigners have long warned about - that Trident nuclear warhead convoys present a risk to everyone living along the routes they take.

Next Monday - 10 July - anti-nuclear campaigners "Block the Builders" will be returning to the Aldermaston site, where they intend blockading the ongoing construction of new weapons-related facilities.

"The government is planning a new generation of nuclear weapons, and we plan to stop them" a member of BtB stated today.

Background
In January 2005 the MoD prepared a report looking at the risks associated with the transportation of nuclear warheads - the declassified summary is entitled "Operational Safety Case for Transport of Nuclear Weapons". The MoD report confirm that a "large" accident could trigger the partial detonation of warheads on board.

The convoys, which travel between AWEs Aldermaston and Burghfield in Berkshire and RNAD Coulport in western Scotland, are a necessary, but little-known, aspect of Trident's deployment. Without regular checks and maintenance (and of course, their initial delivery after production), Trident would not be operationally safe. To do this, warheads are regularly transported from one end of the country to the other, passing close to major centres of population.

Previously based at RAF Wittering, and with security provided the MoD police's Special Escort Group, the convoys are now based at AWE Aldermaston.

http://www.blockthebuilders.org.uk/action for location and other info