On 4th July 2006, American Independence Day, the annual Independence from America demonstration was held at NSA Menwith Hill [ Photos: 1 | 2 ]. It was a hot and sunny Tuesday and the 100 or so protestors were outnumbered by the massive police presence, after drumming, songs from Tom Neilson and some speeches there was a circumnavigation of the expanding spy base. One woman was arrested and later released after a 'caution', see the report from Lindis and Anni for the full story.

The National Security Agency (NSA) base at Menwith Hill, near Harrogate, is the biggest US spy base outside America and it plays a key role in the interception of electronic communications — it is a part of ECHELON (Euskera article | the hardware behind Echelon), missile defence and star wars. The Campaign for the Accountability of American Bases (CAAB), the organisers of the demonstration, evolved out of the long campaign of protest at Menwith Hill, which have been going on since the 1950s, read on for links to reports of events held there over the last few years. 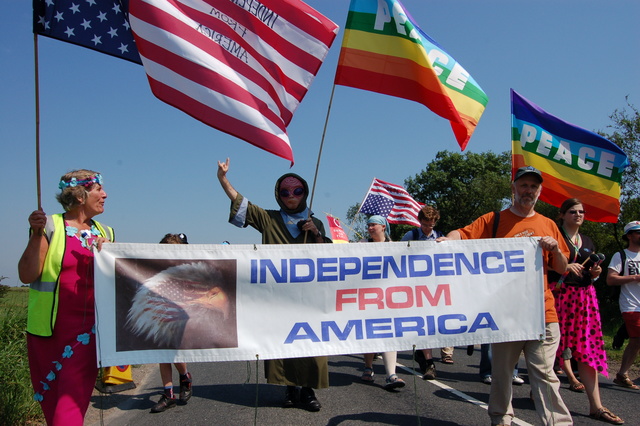 Earlier this year the first arrests in the UK under the new Serious and Organised Crime and Police Act 2005 (SOPCA) took place at Menwith Hill, two women were arrested on Saturday 1st April 2006 within hours of the new Act being brought into force.

Every Tuesday night, from 6–8pm CAAB hold a protest outside the main gate at Menwith Hill, in Feburary 2005 a report from a Tuesday vigil was posted to Indymedia.

2004 saw the Block the Base protest in which Yorkshire CND blocked three gates and this caused tailbacks for hours and massively disturbed the shift change-over.

In 2003 there were three major protests at Menwith Hill, in March there was Foil the Base [Video], on 4th July there was the 'Independence from America' protest [Reports: 1 | 2 | 3 | Video ] and in October there was the Keep Space for Peace demonstration.