As dusk falls, I try to remember…where exactly was I one year ago, as dusk fell?
Was I, as a legal volunteer from Bristol, monitoring protests against the G8 in Gleneagles (Scotland), still on duty outside the Stirling eco-camp attempting to monitor the police’s abuse of their powers? Or had I been replaced for the night, and made it back to our Edinburgh base (and pub)? It’s all such a blur now, yet only a year ago… 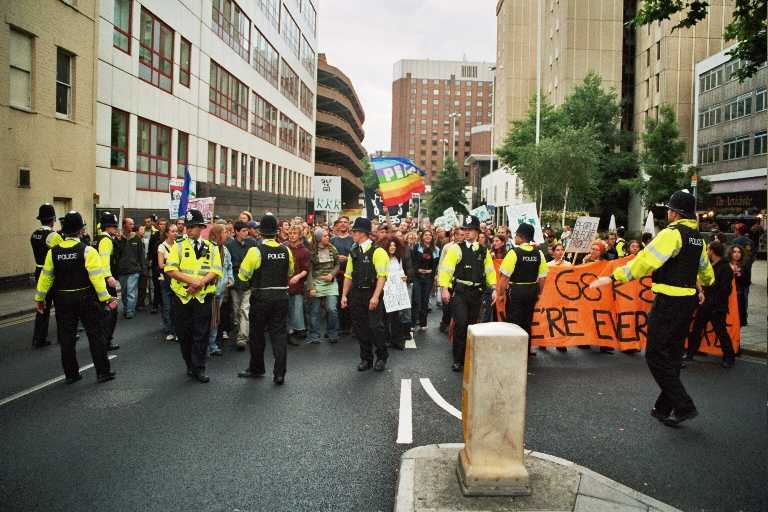 On 7.7.05 the cops had locked-down the anti-G8 eco-camp in Stirling, south-west of Gleneagles They’d been trying to do this since the evening of the 5 July, but had failed badly that night, as groups pushed out through their lines. On the night of the 5th, and throughout the 6th, thousands of protesters, including several hundred from Bristol, had attempted to disrupt the opening day of the G8’s summit.

But on the morning of the 7th, as the last bedraggled remnants of those protesters returned to Stirling after maybe 36 hours on the march, news came through that changed most of our worlds, and at least our mood that morning – from a sense of achievement, to a sense of…why? And how? And it changed the cops attitude too.

Campaigners tried to get news of events back in London, and news of friends/family/comrades in London, and tried to adjust to the horror of the atrocities in London. Difficult without TV, disrupted communications, and being buzzed by police helicopters too! The cops responded as the state always does in times of crisis, going back to plan A – the complete lockdown. No-one gets in, or out, without a search & ID check, and talking back means arbitrary arrest anyway. The State in panic, revenge, and full-on asshole mood. As if the anti-G8 protesters could possibly have anything in common with suicide bombers? Well time tells.

One year on, and all the NGO’s and charity campaigns (ie WDM, Action Aid, African Initiatives etc) with an ounce of independence from the Blairite agenda are telling it like it is – the G8 didn’t make poverty history, MPH sold us a lie. It’s like asking your bank to write off your mortgage, or a turkey farmer to not kill turkeys before Christmas – it just does not happen! How can the capitalist system solve poverty when it is based on the exploitation of the many? Whilst the poverty gap, that gap between rich and poor, continues to increase in the UK & globally, how can we be surprised that starvation increases in Africa?

One year on and our civil liberties and human rights are going down the pan. The state/cops shoot first and ask questions months later, whilst the mainstream media plays ball. If you aren’t white you could well be a terrorist or illegal immigrant, so they’ll stick you in a detention centre anyway just in case. ID cards, CCTV and vehicle reg technology is now a part of our lives. Innocent until proven guilty? Not any more.

One year on and the war on Iraq spreads to Afghanistan (again), with Iran and North Korea coming up fast on the rails. Do our leaders not learn nor understand anything? Their desire for social control and profits across all the world’s continents leads them ever onwards to the cliff-edge of destruction, be it through resource wars (and nuclear destruction), regional re-alignment, or the inevitability of climatic catastrophe. As the Israeli state continues it policy of apartheid, and genocide, against Palestinians, those pro-war liberals must be asking – why haven’t we invaded to stop an evil regime? Well, it just depends whose ‘side’ you are on, as to whether you get invaded & bombed, or funded & privatised.

One year on and it’s my bedtime. I have a safe, comfortable, secure home to sleep in (and it is very unlikely the state’s stormtroopers will come knocking tonight). That puts me in the minority of the world’s population. Now I remember why I was there, outside Gleneagles, a year ago. And now I remember why I, why all of us, must be out on the streets again. We need to reclaim our world from the madness of our leaders and the system they have embraced. By any means necessary – be the change that you want to see.

http://bristol.indymedia.org/newswire.php?story_id=24972&search_text=G8
The dissolution of the Bristol G8 Dissent group: