The last ten years have seen reduction in the amount of women's resistance to sexual eploitation, and a rise in the amount of lap dancing clubs in the City. However a group of local women and girls have set out to challenge this. 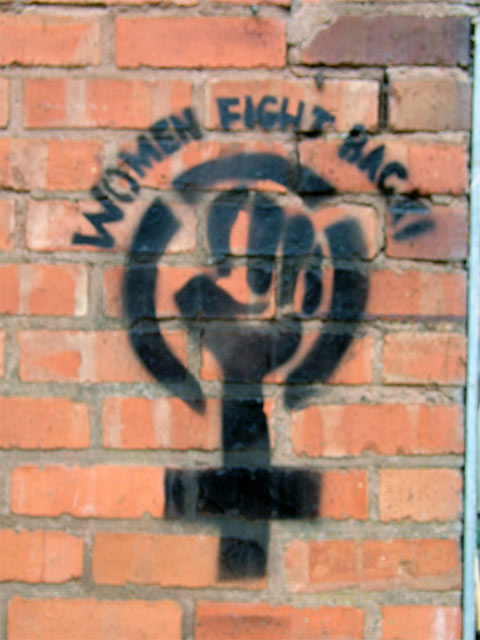 For those old enough to remember the women's protest group of the 70's and 80's, 'Women Fight Back' are back!

The increasing emergence of lap dancing clubs in the city was enough to make a group of local women and girls take up the challenge of fighting back against the exploitation of women's bodies for men's profit and enjoyment. The exploitation of women's bodies seems to be becoming a more and more acceptable medium for advertising and entertainment. What was once deemed politically incorrect 20 years ago is now deemed as being okay, It would seem that with all the Equal Opportunities policies we now have in society, women's equality is now considered guaranteed and safe from threat. Policies have actually resulted in women' issues being put on the back burner, the fight is over, so anyone discriminating against us in the workplace etc will be taken to court. However what we are actually left with is a green light to sexism, there is no resistance to exploitation of our bodies anymore, there doesn't need to be because there is a policy that does that for us!

Lap Dancing clubs are emerging everywhere, Birmingham has been described as the 'lap dancing capital of the country'. Adverts for Spearmint Rhino appear on billboards along the city’s major roads. Wherever you drive around the city, the image of a sexily clothed woman lying back under text that says, 'The Negotiator', is inviting men along to clubs to negotiate their price for her.

Women Fight Back are serious in their intention to rid the city of these centres of sexual exploitation and of the harm that they cause to women, children and society as a whole. Campaigning will take on many forms, there will be something for all women to get involved with, age is no problem, as long as you are female you can get involved. Email the link below for more info or get involved.