Outfoxed - the war on journalism 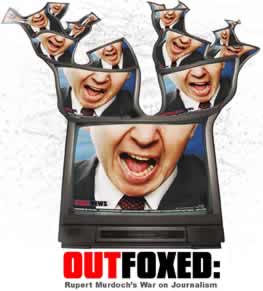 examines how media empires, led by Rupert Murdoch's Fox News, have been running a "race to the bottom" in television news. This film provides an in-depth look at Fox News and the dangers of ever-enlarging corporations taking control of the public's right to know.

The film explores Murdoch's burgeoning kingdom and the impact on society when a broad swath of media is controlled by one person.

recent productions of the Indymedia European Newsreal; and the Surveillance Camera Players.