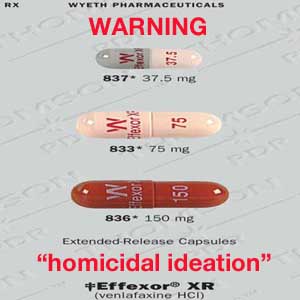 US: A widely prescribed antidepressant that Andrea Yates took in the months before she drowned her five children in 2001 had homicidal thoughts added recently to its list of rare adverse events. But the drug's manufacturer says it believes Effexor doesn't cause such phenomena.

Wyeth spokeswoman Gwen Fisher said that while Effexor was being studied for use in treating panic disorder, the company found one person reported having homicidal thoughts in its clinical trial.

"Homicidal ideation'' was added last year as one of Effexor's rare adverse events, defined as something not proven to be caused by the drug. The Madison, N.J.-based company never notified doctors or issued warning labels because it found no causal link between its drug and homicidal thoughts, Fisher said.

The U.S. Food and Drug Administration defines rare as occurring in less than one in 1,000 people. In the U.S. alone, about 19.2 million prescriptions for Effexor were filled last year.

"We believe there is no causal link between Effexor and homicidality,'' Fisher said. "In our minds, we've taken every precaution.''

Dolan said she discovered the labeling change about two weeks ago after stumbling across the FDA's MedWatch November newsletter.

"Families don't know to be aware of this possible effect,'' said Dolan, an Austin doctor who reviewed Yates' medical records after her first trial at the request of her then-husband. "As doctors we're not going to look through 36 pages of labeling.''

Yates, 42, has pleaded innocent by reason of insanity in her second murder trial that started two weeks ago. Her 2002 capital murder conviction was overturned on appeal because some erroneous testimony may have influenced jurors.

Yates' attorneys have never disputed she killed the youngsters but say she didn't know that the drownings were wrong. Prosecutors say Yates may be mentally ill but does not meet the state's definition of insanity.

She had been prescribed Effexor in varying doses after her first suicide attempt in 1999 and after staying at a mental hospital in 2001. A month before the children's bathtub drowning deaths, her daily dose had increased to twice the recommended maximum dose, Dolan said.

Yates' lead attorney, George Parnham, said Wyeth should have publicized information about the possible rare adverse event, but said that will not affect Yates' case.

"Obviously this is a severely mentally ill individual who was on a plethora of psychiatric meds,'' Parnham said. ``There's no question mental illness killed those children.''

In 2004, the FDA ordered that all antidepressants carry "black box'' warnings that they increase the risk of suicidal thinking and behavior in children. That action was driven by data that showed that on average 2 percent to 3 percent of children taking antidepressants have increased suicidal thoughts and actions.

Effexor is Wyeth's top-selling drug, with $3.46 billion in 2005 sales worldwide, more than twice the total for its No. 2 product and 18 percent of its total revenues for last year.

Yates hasn't had much luck with the psychiatric industry.

In her original trial it was the forensic psychologist and
'criminal profiler', Park Dietz, who invented a non-existent
TV episode in an attempt to undermine her diminished
responsibility defence and get her the death penalty.