the London Indymedia film festival '8 Days Against The G8' returns to Rampart this Wednesday 12th... 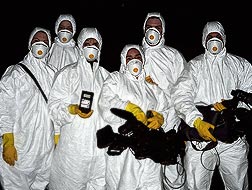 On April 26, 1986, the worst nuclear accident in history occurred when a reactor exploded at the Chernobyl nuclear power plant in Ukraine, releasing 90 times the radioactivity of the atomic bombs dropped on Hiroshima and Nagasaki. Sixteen years later, award-winning filmmaker Maryann De Leo took her camera to ground zero, following the devastating trail radiation leaves behind in hospitals, orphanages, mental asylums and evacuated villages.

HEAVY WATER a film for Chernobyl

tells the story of the people who dealt with the disaster at ground-level: the fire-fighters, the soldiers, the 'liquidators', and their families.

including discussion and Q&A