Public utilities, including even our water, have been sold to foreign corporations who have teamed up with the new black elite as required by government "empowerment" policies. Cost reduction‚ measures have destroyed many jobs and the insensitive cost-recovery‚ policies, which advocate for service termination for those too poor to afford increased tariffs, have seen millions go without the most basic of necessities. 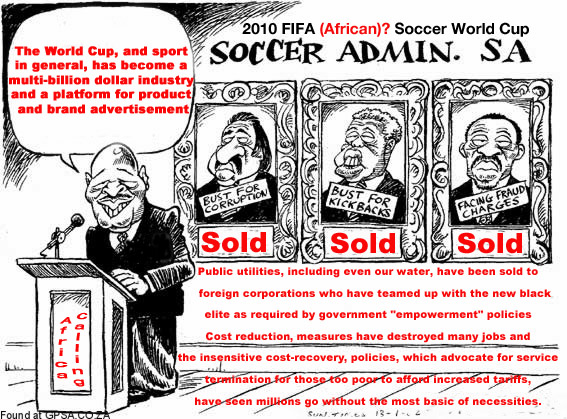 With the 2006 FIFA soccer World Cup hosted in Germany concluded, all eyes are now on.

The country will be hosting the next world's biggest sporting event in 2010. This being the first ever World Cup to take place on African soil, in media and government circles, it has been referred to as an "African World Cup."

"Africa's time has come", others are saying. The impression given is that the entire continent, and not just the host nation, stands to benefit from the tournament.

At the high profile event 'dubbed Africa Calling'‚- marking the unveiling of the 2010 logo in Germany on Friday 07 June 2006- attended by the chosen‚ of South Africa, Africa and the world- Thabo Mbeki and FIFA President, Sepp Blatter, strongly refuted recent international press reports that the event might be under threat, or to be more precise, might be taken away from South Africa because of, inter alia, the high violent crime rate and lack of adequate accommodation for the expected international visitors.

While it would be safe to conclude that these claims have been proved unfounded, nonetheless they have elicited a very heated national debate.

Unfortunately, given SA's fairly recent history of segregation, the debate has, to a large extent, been marred by racial polarisation.

A large number of black people argue that the country is quite capable of successfully hosting the event. They are also asking why such concerns were immaterial in 1995 and 2003 when SA hosted the Rugby World Cup and the Cricket World Cup, respectively.

The argument put across is that concerns about crime and accommodation are only being raised now because soccer is predominantly a black sport.

On a recent SAFM phone in programme, mainly white listeners, mentioned incidents of violent crime as their biggest worry.

The recent tragic events in Jeppestown, where four police officers were killed in a bloody shoot-out which also left nine suspected armed robbers fatally wounded, has been used to illustrate that, come 2010, the safety of the 500 000 expected tourists cannot be guaranteed.

Surprisingly, the discussion has not questioned whether South Africa-given its widespread socio-economic problems -should have even took part in the costly bidding process to host the tournament.

Indeed, "Mama Mia" [quoting Sepp Blatter] if this is an indication that, generally, the public does not see the event as a huge waste of desperately needed resources.

With such a huge-apartheid induced service backlog, 40% unemployment rate-responsible for the high crime rate-shocking HIV/Aids statistics, a scandalous illiteracy rate, collapsing public services, just to name but a few, should South Africa be wasting tax money on the World Cup?

Unfortunately, everyone, including some of the most progressive formations of our society, such as trade unions, seems to have swallowed the government's well-calculated propaganda that the event will be like manna‚from heaven that will result in a lot of positive spin-offs, including foreign currency- boosting the economy, 159 000 short term and sustainable employment opportunities, showing the world that South Africa is friendly to foreign investment, etc.

Moreover, soccer crazed fans will have the opportunity to see their international soccer stars, such as Ronaldino, Ronaldo, Beckham, and others, in action.

However, as recently witnessed in Germany, in neo-liberal times, where every aspect of our life is dictated by a monopoly of multinational companies, a soccer World Cup is no longer just an event where fans get together in a spirit of nationalism and patriotism.

The World Cup, and sport in general, has become a multi-billion dollar industry and a platform for product and brand advertisement.

In addition to governments, soccer officials and players- with their fat paycheques - also seem to have prostituted themselves to big business. Teams wear particular corporate brands and most international players are endorsers of different products.

And in Mbeki's neo-liberal paradise‚ where the interests of big business reign supreme, the 2010 World Cup is not only a marvelous opportunity for shareholders to make a killing, but also stands to strengthen the relationship between government and the private sector, which, in recent times, has gotten cosier at the expense of the working class.

The so-called "business friendly" environment has been made possible courtesy of advice by international anti poor financial institutions, such as the World Bank, IMF and the WTO.

Public utilities, including even our water, have been sold to foreign corporations who have teamed up with the new black elite as required by government "empowerment" policies. Cost reduction‚ measures have destroyed many jobs and the insensitive cost-recovery‚ policies, which advocate for service termination for those too poor to afford increased tariffs, have seen millions go without the most basic of necessities.

Asgisa-government‚s latest pro-rich policy- identifies preparations for the World cup as one of the "key challenges" in the infrastructure sector.

Included in this, is the building and improving of 10 stadiums and " investment in the environs and access to the stadiums" - including the R1.6 billion 70 000 seater King Senzangakhona‚ stadium to be constructed in Durban.

South Africa‚s hosting of previous international events-widely quoted to demonstrate that this country has the capacity to host the 2010 FIFA World Cup- such as the 2002 World Summit on Sustainable Development (WSSD), 2001 World Conference against Racism, All Africa Games, and others, have not benefited ordinary South Africans, but business people in the banking, aviation, hospitality, oil, and telecommunications industries.

It is therefore no surprise that these very same people have handsomely bankrolled South Africa's bid and are the main sponsors of the 2010 World Cup. It would be naïve to think that this is out of the love for the sport.

Financial gains and product showcasing take precedence over all else.

Most probably the millennium‚s biggest joke, the ringleader of the neo-liberal cabal paving the way for the 21st century re-colonisation of Africa-in the name of investment‚ and sport- by foreign capital is Thabo Mbeki.

Perhaps, his internationally celebrated poetic "I am an African speech speech should be re-written:" I am un-African. I owe my being and loyalty to the stock markets of London and New York.

Mbeki's darling‚ of the bourgeois press, Nepad, while having met 0% of its much celebrated developmental and human rights targets, has facilitated the plunder of Africa‚s resources by foreign and South African capitalists.

In 2005 following Barclays‚ acquisition of a large stake at ABSA bank-hailed by our country‚s neo-liberal politicians- Absa's Chief Executive Officer, Steven Booysen, commented, "With Barclays investment, Absa will become a pan-African powerhouse and will rule the continent."

Together with 23 other foreign corporations, Barclays is facing a lawsuit by apartheid‚s victims in the United States Second Circuit Court of Appeals for "abetting" and "aiding" the apartheid regime, with dire consequences for the oppressed black majority.

One of the main sponsors of the recently concluded 2006 German world Cup, Adidas- notorious for its use of child labour in many of its sweatshops‚ and once accused of kangaroo killings in Australia- is reported to have increased its sales by 30% during the tournament compared to the same period last year.

An official of another German based corporation, Puma, which, like Adidas, also specialise in sports wear, has said of 2010: "we see Africa as a market with high growth potential"

No doubt, profit maximisation, is also the European Union Commission‚s main reason for rallying behind South Africa and the 2010 World Cup.

When it is clearly mostly foreign corporations that stand to score big from 2010, media and politicians‚ insinuations of an "African World Cup" are, hence, very disingenuous.

The world Cup will also come at a huge expense to the environment. Rapid pollution of the atmosphere-resulting in climate change and global warming- can be expected with a sudden increase in the number of aeroplanes flying into the country and cars on our roads.

Furthermore, much-like the misnamed black economic empowerment‚, the World Cup stands to further fatten the pockets of the black petty bourgeoisie who were present in significant numbers at the logo launch and unveiling in Germany.

And for the homeless in the country's major cities, the World Cup will only mean free‚ food and lodging at the country‚s already overcrowded prisons-subjecting them to widespread prison rapes and possible infection with the deadly Aids virus. The government has mastered this art of disposal of all embarrassments‚ prior and during major international events.

It is indeed very regrettable to note the extent to which soccer-which has always been regarded as a beautiful‚ working class game-has been co-opted by fat cat capitalists.

Equally nauseatic is the government‚s shrewd tendency of fooling the unsuspecting poor into supporting its extravagant pro-rich projects with empty promises. The corrupt multi-billion rand arms deal was initially touted as a huge investment for the country that would result in 63 000 jobs.

None of these jobs have materialised. Instead, more of our limited resources have been utilised in inconclusive probes and in selective prosecution of officials involved in the awarding of contracts.

The public should therefore not expect that the 2010 soccer World Cup will change their lives for the better, as government, in collusion with the corporate owned media, want us to believe.

Hopefully, the public will see 2010 for what it truly is: yet another big government sanctioned corporate ploy, and demand the re-allocation of resources towards tackling the country‚s poverty and underdevelopment.