This is a short description of the Protest from Marble Arch to the American Embassy on Juy 15th 2006.

We marched to highlight the ongoing torture and illedla imprisonment by the Americans in Guantanamo Bay. 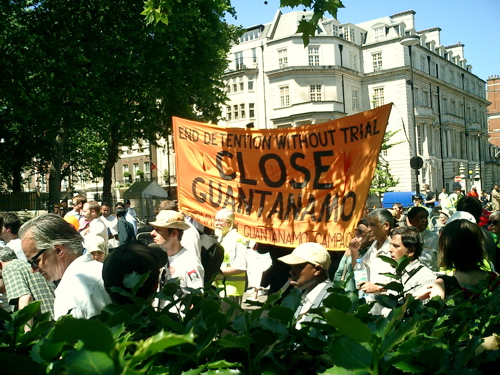 The Close Guantanamo Bay protest was attended by, I guess, 500 people.

The march started at Marble Arch in the blazing sun at 12.30 and proceeded to the front of the American Embassy, which was very close by.

The police presence was staggering for such a small crowd. There were police at the beginning, during at at the end of the march. We also noticed vans of police (sitting inside roasting in the sun) on side streets at Grosvenor Square.

There was a short introduction carried over a quite good p.a. Then a series of people gave impassioned speeches on the atrocities committed by the American administration and the complicit help given by Britain.

I am sorry I didn't get the names of the speakers, but their message was loud and clear. Altogether the event went well and everyone partook in an important event.

For more pictures visit my blog....